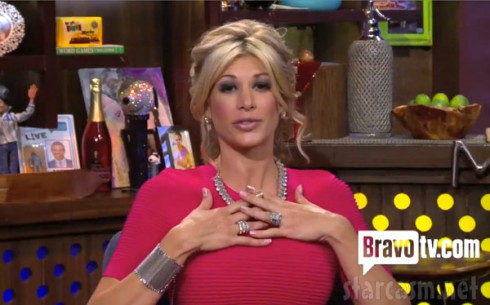 The Real Housewives of Orange County‘s Alexis Bellino has often come under fire from fans for her views on marriage and how the husband is the King of the household. During the Watch What Happens Live After Show last night a caller pointed out that The Real Housewives of Atlanta‘s Porsha Stewart seems to have similar views, and the caller asked Alexis if she would consider reaching out to Porsha to show support for her as she goes through a difficult divorce from husband Kordell Stewart.

The call comes in right around the 3:45 mark:

Here is the caller’s full question and Alexis’ full response:

Renee from Madison, Wisconsin: “I have a question for Alexis. First of all, I really do love you. I don’t think everybody hates you. I think you’re wonderful! And I’d like to ask — You know, I always have this thing in my mind where I kind of pair up Housewives from the different franchises … who I think would be friends. And I often wondered if you would ever consider reaching out to Porsha? I think you’re such a good role model, and I think would be for her. Is that something you would ever consider doing?

Alexis: I tweeted Porsha after seeing her first couple of episodes. I tweeted her and just said, “Good for you girl! Stay true to God, stay true to your beliefs, and your marriage” … my heart breaks for her right now. I know she’s not going through an easy time. But, we are similar in the fact that that’s what we believe marriage should be, and my husband will always be King to me, until he proves me wrong or wants to divorce me, and if he does … ‘See ya!” But he won’t. And I just will always worship him and have him be my husband because he treats me like a queen. So, I would absolutely reach out to Porsha.

The clip also included Andy’s apology for losing a drawing Alexis’ son James had done of him and given to him a couple years ago (Andy explains that it used to hang in his dressing room, but somehow got lost in the shuffle), but Alexis was happy to present Andy with a brand new portrait drawn by James! Check it out: 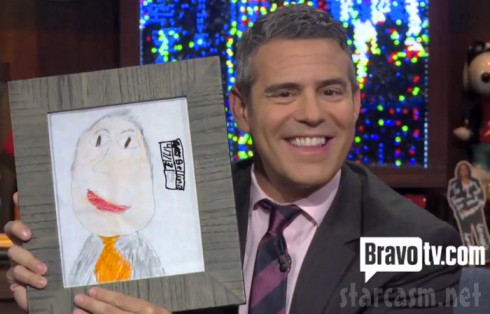 Andy commented, Wow! My head really got bigger.” Alexis then brilliantly pointed out that he has a book out now, implying that’s why his head got bigger.