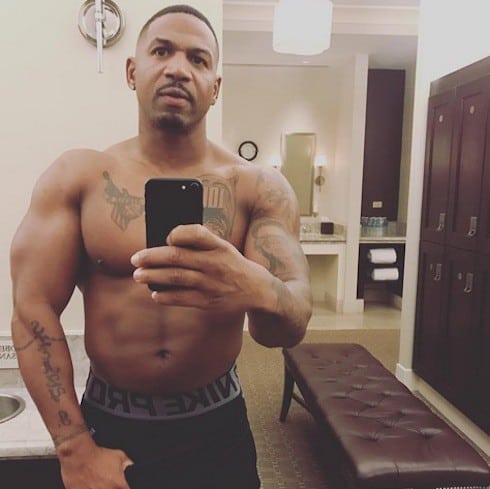 When his LHHATL spin-off began filming, the rumors began flying: Are Stevie J and Faith Evans a couple? The two were spotted out and about on several occasions earlier this fall, when speculation about the true identity of Joseline Hernandez’s baby daddy was at its most rampant. And Stevie’s been leading his fans to believe that he and Faith are together, talking up the alleged relationship during several of his most prominent publicity appearances for Leave It To Stevie:

However, according to a brand-new report from noted gossipsters Fameolous, another woman has made quite an impression on the VH1 star, and the two have been dating in secret for some time. Their report points out that the sister of rising R&B star Candace Boyd claimed Candace and Stevie have been getting it on the whole time Stevie’s allegedly been with Faith.

Shortly after that claim, Stevie shared his lone Instagram shout-out to Candace, who hadn’t previously appeared in his social media feeds at all:

Furthermore, some behind-the-scenes cell phone footage of the two of them together made its way online. The first clip is the shorter of the two, and features Stevie getting his jam on in someone’s kitchen, while a woman–presumable Candace, though she never shows her face–asks if this is his song:

And the second, much longer clip, features both Candace and Stevie either listening to or mixing a track in what looks like a hotel room:

More receipts on Stevie J and his boo Candice Boyd. Just putting it here for my website later pic.twitter.com/rtZ5TbpD1i

Admittedly, these coincidences together do not a relationship make. Coming after Candace’s sister’s allegations, though, it’s probably worth keeping an eye on Stevie and Candace: new reality TV shows do need their relationship drama, after all. (And let’s not forget that Stevie is also the alleged baby daddy of Atlanta businesswoman Ms. Jackson, with whom he went in on a period panty endeavor earlier this year. The two recently took to Instagram for a huge & public fight–you can get the details here.)

Finally, here’s a few more shots of Candace, for those of you who might be unfamiliar with her or her work:

Anyone that knows me knows I love #Beyonce.. Happy #Beyday ❤️❤️

Thank you all for the support on my new video and single #DamnGoodTime ft @frenchmontana. Its going up! I feel super blessed to be able to share this moment with you! Keep watching, keep listening #TheBestIsYetToCome ?❤ #GodIsMyEverything #DreamsDoComeTrue

Leave It To Stevie airs Monday nights on VH1.

(Photo credits: Are Stevie J and Faith Evans a couple via Instagram)