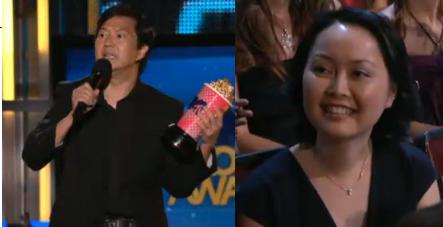 Ironically , the most touching moment from last night’s MTV Movie Awards came from Ken Jeong while accepting an award for Best WTF Moment .  The WTF moment in question was from the popular comedy film The Hangover in which Jeong emerged nude from the trunk of a car.

Jeong was exuberant when his name was announced as he launched out of his seat and made his way through the crowd flapping his arms up and down.  After taking his Golden Popcorn he began his speech with name-dropping thank yous that included director Judd Apatow and his own penis.  He quickly turned emotional though while thanking his wife Tran, who had recently undergone treatment for breast cancer.

Here is the clip of Ken Jeong’s moving acceptance speech followed by a full transcript:

And more importantly than this I want to take the opportunity to thank my wife Tran.  Todd and Bradley Cooper, a good friend of mine, actually helped me through a difficult time when my wife Tran was going through breast cancer treatment and the reason why I did this, she taught me that life is short and then don’t be afraid to take chances and I just want to tell you that Tran is cancer free for two-years!  I love you and toodaloo mother fu**ers! Woahwoahwoahwoahwoahwoahah.”

Ken Jeong, widely referred to as “Dr. Ken,” received a medical degree from the University of North Carolina at Chapel Hill in 1995.  He got his break in show business after winning the Big Easy Laff-Off.  He moved to Los Angeles and started performing regularly at stand-up clubs The Improv and Laugh Factory.  His wife Tran Ho (seen above and in the video clip) is also a doctor.  The couple have two children together, twin daughters Alexa and Zooey.