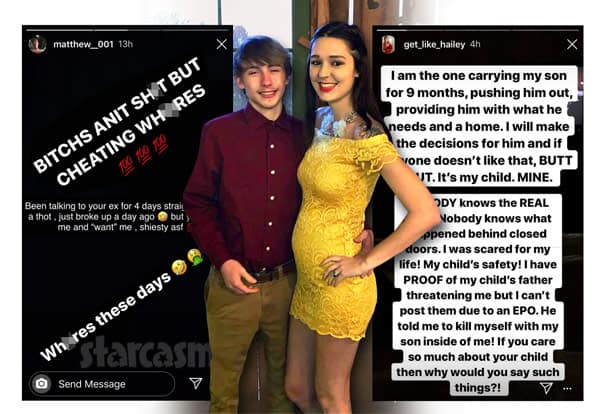 Unexpected dad Matthew Blevins and Hailey 2 (Hailey Tilford) appear to have broken up for good as they both hurl accusations of infidelity at each other just a few months before their baby boy is due.

In case you missed it, the volatile teen Romeo and 2liet had a bigger-than-usual falling out back in December. “Yes, I’M SINGLE,” Hailey 2 confirmed on Instagram. “Me and Matthew aren’t together, we broke up.” She later admitted that the two of them had a less-than-positive relationship. “We are nothing but toxic, we don’t treat each other good at all.”

Hailey was right, as evidenced by her and Matthew’s social media posts since their December split in which both of them exemplify toxicity and definitely do not “treat each other good at all.”

He kicked off the new year with a similar sentiment as he revealed that he and Hailey 2 must have gotten back together for a minute. “Been talking to your ex for 4 days straight ? what a thot, just broke up a day ago ? but you ‘love’ me and ‘want’ me, shiesty asf ?” He followed that up by proclaiming without any apparent self awareness: “Wh*res these days ??.”

Hailey 2 took the high road by revealing she was leaving social media. “I’m off here for a while y’all,” she announced on January 1. “Going to focus on me and Levi until he gets here. He needs me.” [Hailey 2 had previously revealed her plans to name her son Levi Lee Blevins.]

After announcing her imminent departure from Instagram, Hailey 2 shared a series of heartbroken quotes and memes. Here are some examples of the quotes:

I said I’m over you. But every time my phone vibrates, my heart still wishes it’s a text from you…

At least we are under the same sky.

Even when you hate him, you still love him.

Matthew was oblivious to Hailey 2’s sadness as he seemed to be looking for a good time with someone who wasn’t underage like himself. “Who 21 and live in Louisville?” he asked his Instagram followers.

Hailey 2 remained down and failed to follow through on her promise to quit Instagram. “Levi won’t stop kicking me .. he misses daddy’s touch ??,” she wrote. “Literally 3 days ago we were laying in bed cuddling .. now he doesn’t even care I’m alive ?”

She then expounded on her disappointment: 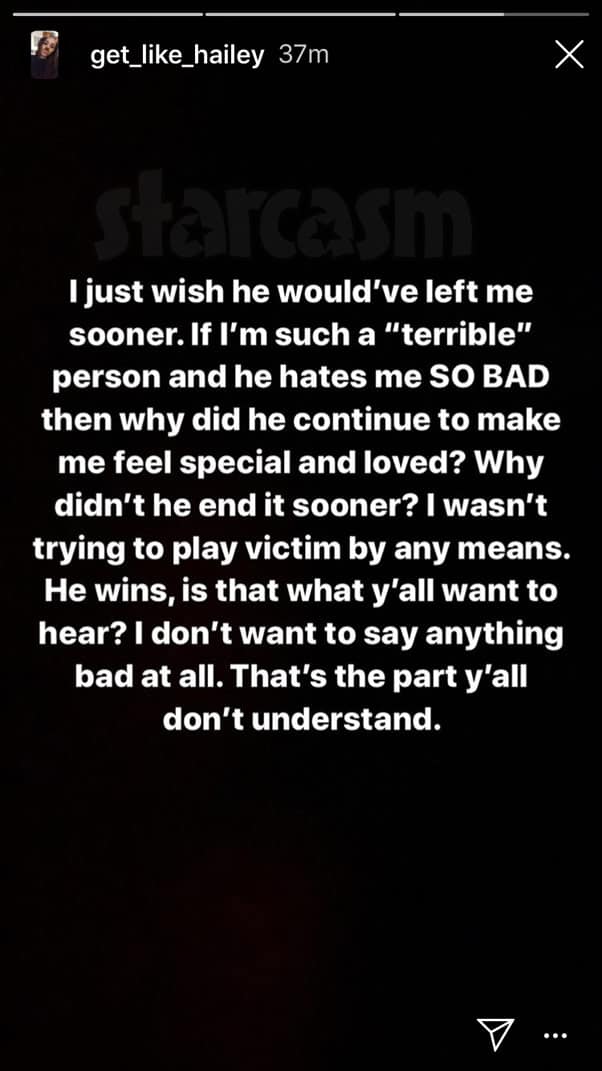 That sparked this back-and-forth between Matthew and Hailey 2 in which he reveals that she took out a protective order against him:

MATTHEW: Post on your story playing victim all you want. Your the cheater, your the abusive one, your the one who dogged me. Point blank period.

HAILEY 2: Everyone keeps telling me to stop thinking about you but how can I? Every time our son kicks it just makes me think of you even more. Everything I see, do, hear, reminds me of you ?.

MATTHEW: She says this but been talking to her ex behind my back, came to my house putting her hands on me and everything. Told me I can never see my son ever and then went out and put a EPO on me for HER doing. 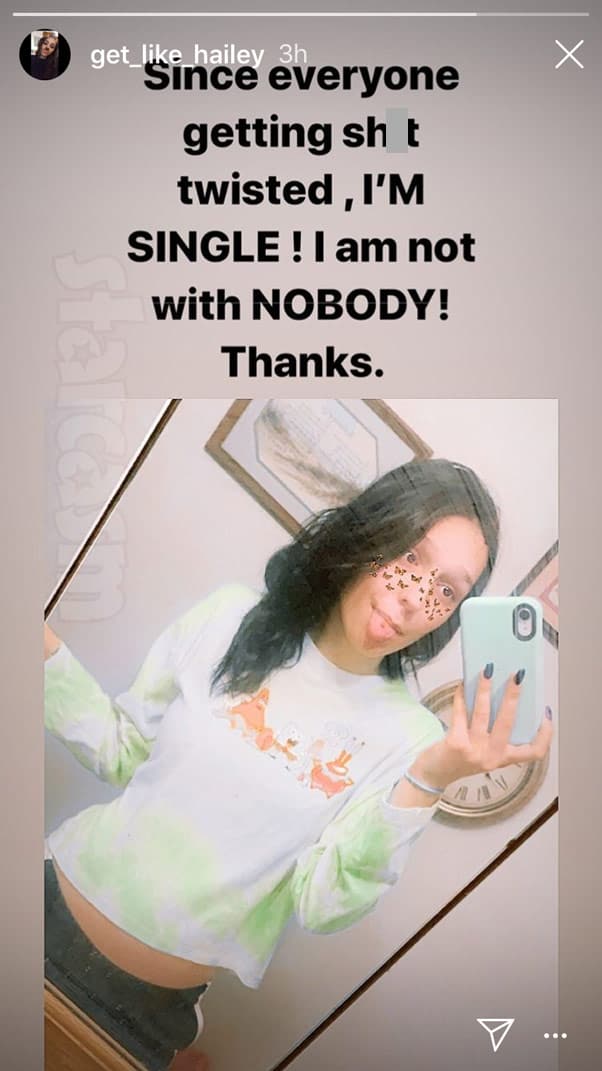 The animosity between the two continued to play out publicly this week as Hailey 2 confirmed that she did not want Matthew (or his family) to be involved in her son’s life. That angered Matthew’s sister and brought her into the conversation:

HAILEY 2: My Ex and his family WILL NOT be involved in my son’s life at all. They don’t care enough about him while he’s inside of me? Don’t care about him when he’s here then. Keep the same energy. We’ll do just fine without you.

MATTHEW’S SISTER: Using a unborn baby against a family that wants everything to do with your son. Your a sad human being. Who does that you need help. You should want that baby to have all the family he can have. Its sad I cant even look forward to him being here because you will keep him from everyone. All because someone doesnt want to be with you.. You cant expect someone to be with you if you cheat on them and beat them like wtf Your an attention seeker. Your robbing that baby of a wholeee family because you heart broken. not cool at all. Grow up

HAILEY 2: I am the one carrying my son for 9 months, pushing him out, providing him with what he needs and a home. I will make the decisions for him and if anyone doesn’t like that, BUTT OUT. It’s my child. MINE.

HAILEY 2: NOBODY knows the REAL story. Nobody knows what happened behind closed doors. I was scared for my life! My child’s safety! I have PROOF of my child’s father threatening me but I can’t post them due to an EPO. He told me to kill myself with my son inside of me! If you care so much about your child then why would you say such things?!

HAILEY 2: This is MY life and MY CHILD. Idc who likes it or not! He can show effort and fight to PROVE he wants to be in my child’s life. So continue to talk your sh*t. All that matters is my son and HIS safety.

MATTHEW: Y’all believe the bullsh*t she be saying all y’all want ? SHE WAS CHEATING W HER Ex.

And another update from Hailey 2: 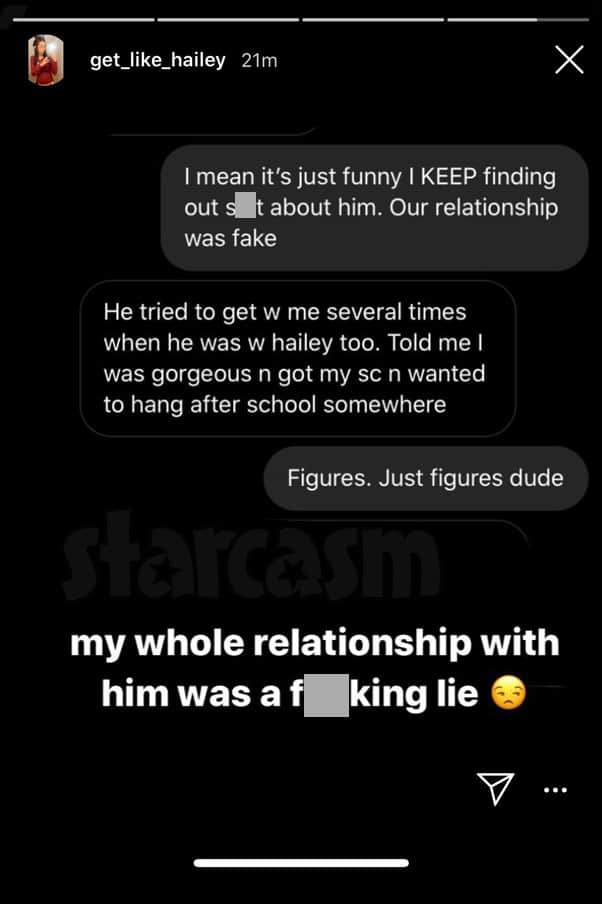 That should get you all caught up on the Matthew and Hailey 2 drama. Well, there is the added bit of info that Hailey 2 is apparently having second thought on baby names as she recently posted a poll in which her followers could either vote for Levi Lee or Greyson Lee.

UPDATE From Hailey 2 on January 14:

Many of you don’t like when I post my business on my page but I’m doing this for the ones who truly care and keep messaging me asking for an update.

Here’s the update: Me and Matthew aren’t together. Obviously. This time it’s serious and hurts more than ever. We both are flawed and I feel until we both get help nothing will ever change. He blames me, I blame him blah blah and it’s not healthy. It’s BOTH of our faults.

I don’t want to go into in depth detail about our problems but I did get an EPO on him due to him saying some things that scared me, that’s not important but today in court broke me and made me realize this isn’t the smart thing to do. Period. I’m 18 and he is about to be 18 and in 3 months exact we will have a beautiful baby boy here.. I DON’T by any means want my baby to grow up without his daddy and not know him. It’s cruel.

Now with or without your support I’m going to try my hardest to figure out a way to fix this mess and co parent with Matthew. It’s only fair he gets a chance to be a parent to our kid as well. We did in fact make him together. I can’t spend my whole life holding a grudge.. I’m a mommy now .. there are bigger problems in the world.

Thank you to those who have continued to check on me and I’m sorry I can’t message you all back; there’s just so many. Just know I ADORE your support ?

Why are Ben Affleck and Jennifer Garner divorcing? What insiders say about their tumultuous marriage