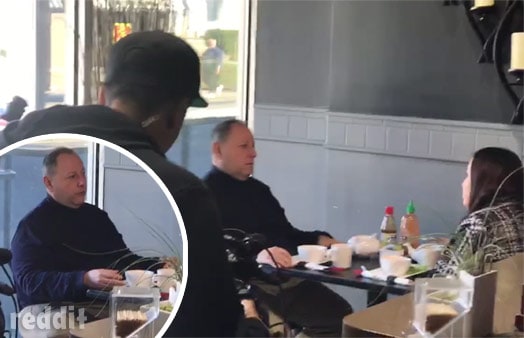 We previously reported that 90 Day Fiance couple Annie and David Toborowsky have continued to film with TLC, and now we have video proof! And a great conversion story!

The video was posted in the 90 Day Fiance subreddit by a fan, but she wasn’t the one who recorded it. More on that in a second — first, here’s the clip in which you can see David and Annie enjoying a meal as he talks demonstratively:

My SO caught David and Annie filming in Louisville, KY this past Sunday! from r/90DayFiance

“Just last week I made my boyfriend watch the show with me,” the original poster says of the clip. “He had never seen it before. On Sunday he was in a restaurant and noticed a bunch of film cameras and saw that it was David and Annie! He started taking a video on his phone because he knew I would be excited to see it, and the producers actually stopped filming once they saw him recording. They even asked him to delete the video.”

It’s hard to make out what David is talking about in the clip, but the redditor’s boyfriend says he “heard David talking about possibly moving to Thailand.” So it could be that part of David and Annie’s story line on Happily Ever After will be whether or not they should move back to Thailand. (I suppose they could be filming for the online-only “What Now?” web series — but every indication is that they will be back on the network for HEA.)

David seems to be mending things with his family, partly due to all of them having to deal with the frightening incident in January in which David’s son Jacob was accidentally shot in the face by a friend, so it seems odd that he would want to jet back to Thailand at this point. But then again, we don’t know the entire story — perhaps his ATM BFF Chris Thieneman has offered David another sweet job at Fantasy Thailand?

In case you were curious, or wanted to recreate this Toboromantic scene with your significant other, the OP revealed that the restaurant the two were filming at is Pho Cafe located on Bardstown Rd. in Louisville.

David’s story last season was certainly entertaining to say the least, but not necessarily in a way that was favorable to him. Are you looking forward to seeing more of David and Annie’s relationship play out on TLC, or have you had enough?

90 DAY FIANCE SPOILER Did Robert and Anny get married or not?