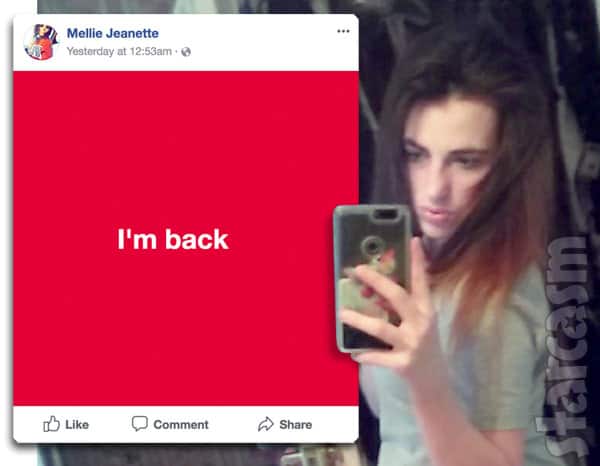 Former Gypsy Sisters star Mellie Stanley is free again! The 28-year-old reality star had been behind bars since early December after being arrested for her alleged involvement in a coupon scheme with her husband George Lee. Mellie was able to post her bail amount thanks to fundraising efforts by friends, fans, and family — a fundraising effort that is also paying for a private attorney for Mellie.

“I’m back,” Mellie posted late Sunday night on her new Facebook page to announce her release. “Everyone who has helped me I want to thank each and everyone of y’all,” she said in a separate post. “Norman, uncle Frank, uncle Saul, DANNA and SHELLEY, Brandy, Tanya, and everyone else who gave money — thanks a lot. I appreciate everything.” Mellie then realized she had let off the Gypsy Gossip: Tattle Tales Facebook page that helped organize and raise awareness for the fundraising campaign. “Thank everyone who was on tattle tales for [their] help also,” Meelie wrote, “I forgot to mention that I had a great support team behind me.”

Mellie also updated on her relationship status with husband George Lee, who was arrested on the same day , and incarcerated at the same facility as her until he bonded out last month. “First things first divorce is filed,” Mellie revealed. “So for people asking YES ITS DONE.. I’ll be back to Stanley in 30 days.” (Mellie had legally changed her name to Mellie Lee when she married George back in May of last year.) She later boasted, “I’m Single As A Pringle, and ready to mingle.”

As far as her three children, Mellie revealed during a Facebook live session that she has not been able to see them yet as she is remaining in Louisville until a scheduled court appearance next week.

In case you missed it, Mellie was arrested and charged with felony counts of theft, forgery and unlawful computer access stemming from an alleged coupon scheme that reportedly netted her and husband George Lee more than $18,000 worth of merchandise from Toys “R” Us and Babies “R” Us.