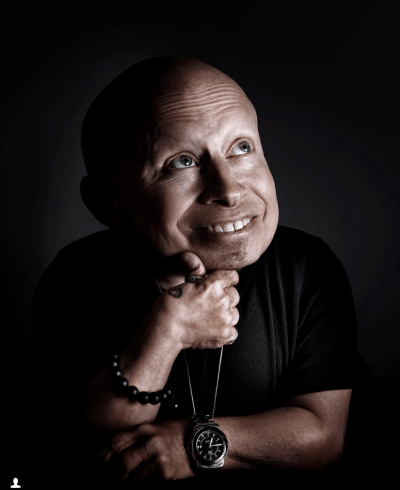 There were initial suspicions that Verne Troyer’s tragic death at 49 was linked to alcohol. Troyer had a history of alcohol abuse and was recently hospitalized with alcohol poisoning.

“Verne Troyer was admitted into the hospital with a high level of alcohol in his system, where he passed out and became unconscious and he passed away,” the Los Angeles County Coroner’s Office told Us Weekly. “[An autopsy]…determined they needed additional testing, which is why the case has been deferred pending toxicology.”

Verne had been open about his drinking problems. After being hospitalized for alcohol poisoning in April 2017, he said in a statement, “As you know, I’ve battled alcohol addiction in the past and while it’s not always been an easy fight, I’m willing to continue my fight day by day.”

He also sought treatment last year. It was one of many stints in rehab for the star, who almost lost his life to alcohol poisoning in 2002. Verne’s dwarfism, caused by cartilage-hair hypoplasia, left him standing at two feet and eight inches, meaning alcohol could be incredibly dangerous for him.

Verne’s ex-wfie Genevieve Gallen once said she’d known Verne to drink a “liter of vodka and a 12-pack of Budweiser” in one day — a potentially lethal amount for someone of normal height.

Big Ben getting a facelift behind me

The statement from his family indicated that Verne had struggled with depression, which can also be linked to alcohol abuse. “Depression and Suicide are very serious issues,” the statement read. “You never know what kind of battle someone is going through inside. Be kind to one another. And always know, it’s never too late to reach out to someone for help.”

Verne’s Instagram account documented a trip to England in the months before his death. Verne was also maintaining a YouTube channel before he passed away. On that channel, Verne shared cooking videos, taste tests, and vlogs. His last video showed Verne talking about his pet peeves:

Which side are you on? In-N-Out or Shake Shack? #shakeshack #innout #tastetest

Icelandic teenager denied the right to use her own name