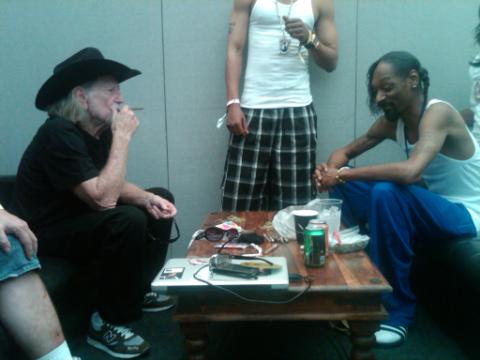 While the big story from last night’s election was the victory of Barack Obama, a couple of western states snuck in a little “you know what” laws while the rest of us weren’t looking.

The people of Colorado and Washington have voted to legalize the recreational use of marijuana. It’s a major breakthrough in the long fight for legalization of cannabis but don’t go whipping out your bongs and calling up Willie and Snoop just yet. As always, there’s a catch.

Alison Holcomb, who managed the campaign to have the law passed in Washington, said:

“Today the state of Washington looked at 70 years of marijuana prohibition and said it’s time for a new approach.”

The Governor of Colorado wasn’t as impressed. Democrat John Hickenlooper, who opposed the law in his state, said:

“Federal law still says marijuana is an illegal drug, so don’t break out the Cheetos or gold fish too quickly.”

What? No mention of Funyuns? Anywho, here’s an idea of how this would work in Washington if the Federal DOJ doesn’t intervene.

-> Washington’s measure establishes a system of state-licensed marijuana growers, processors and stores, where adults (read – over 21) can buy up to an ounce. It also establishes a standard blood test limit for driving under the influence.

Even though it’s been known that these proposed state laws were on the ballots, the federal government has made no official comment in regards to how they will face this issue. Marijuana is deemed an illegal drug on the federal level as Colorado’s Gub pointed out.

Can’t we all just get a bong?