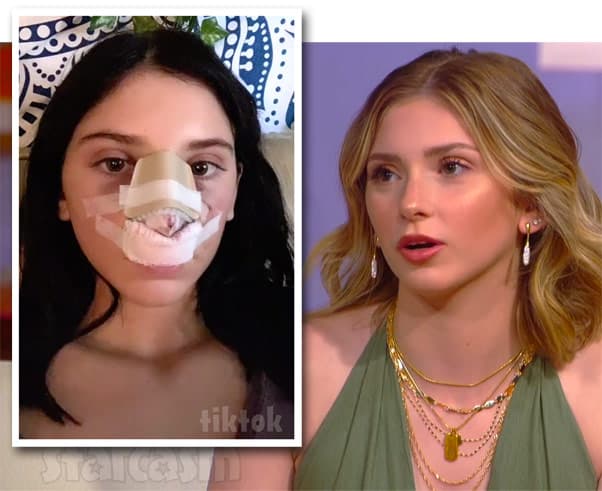 Former Unexpected star McKayla Adkins has been very open in the past about her desire to have plastic surgery, and this week she revealed to her fans that she had her first major procedure in the form of a nose job.

The 20-year-old mother of two is sharing the recovery process in a series of videos and photos posted on Instagram and TikTok. In the posts, McKayla has her nose heavily bandaged, and you can see that she is bleeding and has two black eyes. She has shared specifics about what she had done, which included a septoplasty and a rhinoplasty. McKayla described the procedure by saying her surgeon “fixed my septum and did some cosmetic work.”

After making the announcement, McKayla immediately began to get criticism for electing to shell out money for a nose job when she has two children to take care of. Here’s one DM that she received and responded to in her Instagram story:

COMMENT: Priorities 👏👏 instead of actually owning a house or car you get a nose job, still living off your grandparents.

MCKAYLA: OK let’s talk for a second bc I’m tired of this comment. I haven’t lived with my grandparents for OVER a year. They don’t give me money lol I make plenty on my own. Oh yeah also, I do own a house now & my car is in my name 🥴 😂 people really don’t like seeing other people [fulfill their] desires & dreams.

MCKAYLA: Not to mention I was young as f*** when I was living with my grandparents. I’m 20 and still young, why would it be a big deal to live with them? Bc I’m a mom? Lol.

McKayla also did a series of TikTok videos answering questions, including how much it cost. “I don’t feel comfortable saying the exact dollar amount that my nose cost,” McKayla began her response. “I will say that it is expensive. It’s very expensive. So, if you want your nose done and it’s cosmetic, make sure you’re saving your money.”

“If you have trouble breathing and [your surgeon] can visibly see that you have a deviated septum or that you have a hard time breathing because of it, insurance should cover your nose job,” McKayla continued. “But if it’s cosmetic, save your money baby because insurance is not paying for that!”

If you’re curious how McKayla was able to afford her nose job (and a house and a car?), I’m guessing some of the money came from her OnlyFans account. She currently has 160 posts on the subscription service with more than 13,000 likes. However, her nose job might be holding up her posts for a while. “Temporarily not answering messages,” her profile currently reads. (I can’t link directly to her account due to our advertisers, but you can find her easily under her name kaybabes69.)

#Unexpected @mckayladkinss has been offering nude photos & video via @OnlyFans since last month, and she took to social media on Tuesday to defend her decision at length. She also reveals in the comments that her family knows. https://t.co/tV5HqG4UL9 pic.twitter.com/4IvpC40KQO

Another of McKayla’s TikTok followers asked her if she is able to take care of her son Timothy and daughter Gracelynn. “I can barely take care of myself right now with all the medicine I’m on,” McKayla said. “I’m very dizzy and it’s very hard to walk. So, I decided it wouldn’t be safe if I was watching the kids all by myself. I honestly don’t think I could right now because [motions to her face] yeah. I’m terrified of them hitting my nose as well, and I just don’t want to take that risk because that would be bad. So, yeah, they’re currently with other family. But, I still see them and everything.”

Why was she motivated to get a nose job?

So whenever I started realizing that there were beauty standards that women are supposed to look like, I started to feel real insecure about my nose because I never liked it in the first place, but I didn’t think anybody really cared about that kind of stuff. Once I realized beauty standards is a big thing, that’s when I became, like, overly obsessed with the way my nose looked. I constantly studied it in the mirror, and I just never liked it.

My whole life I’ve always hated my nose. I was always self conscious, like, “I don’t want this person sitting on the right side of me because I don’t want them to look at my nose.” And when I drive, I don’t like people looking at me because they can see me from the right side. And it’s really hard to take forward-facing pictures because my nose is crooked and it is clearly noticeable. So yeah, just so many reasons, and I’m really glad I went through with it.

18-year-old @TLC #Unexpected star @mckayladkinss is looking for help so she can get free plastic surgery by becoming an @EPSMiami brand ambassador. She reveals: "Since I've had two kids my body hasn't been the way it used to be." https://t.co/iz6QVy2pBp

McKayla revealed that she plans to share a YouTube video about her nose job and her recovery soon. Until then, you can keep up with how she’s doing via her TikTok. There are already numerous clips in which McKayla tackles additional topics like the danger of sneezing, what she can and can’t eat, changing out her bandage, and how her kids reacted to seeing her after her surgery.

#Unexpected parents McKayla Adkins & Caelan Morrison broke up again on their daughter Gracelynn's 1st birthday. Get a full recap of all the drama from social media, which included multiple Instagram live sessions and an apology YouTube video from Caelan. https://t.co/aJaHQPvt5A pic.twitter.com/HHEfXdQsY8

In other McKayla Adkins news, it continues to appear as though her volatile split from on again, off again boyfriend Caelan Morrison earlier this year is actually permanent. She shared a photo over the weekend with her new boyfriend to celebrate their five-month anniversary:

Congratulations to McKayla and her new boo! And of course, we wish her a healthy and speedy recovery.