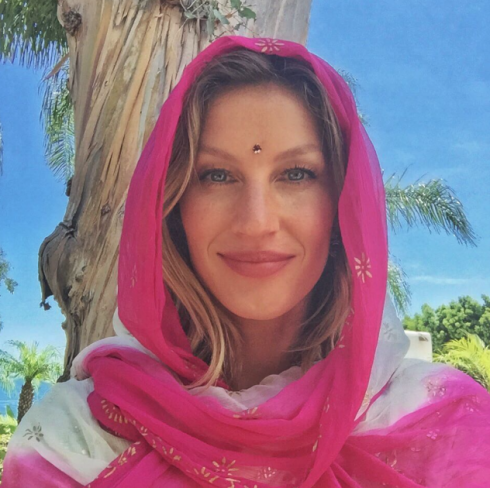 It’s a common practice for celebrities to wear disguises in order to throw off paparazzi and protect their privacy while out in public. While a ball cap and sunglasses seem to the standard M.O., some celebs have taken it to the extreme (remember when Shia LaBeouf wore a brown paper bag over his head).

A new report from Page Six claims that supermodel Gisele Bundchen wore a rather unique disquise during a recent visit to a Parisian plastic surgeon.

Rather than sneaking in the back door or, better yet, owning up to the cosmetic procedures, the mother-of-two was photographed wearing a burqa. Yes, you read that right, a burqa (otherwise known as the traditional Muslim wear for women that cover everything but their eyes).

Gisele donned a burqa to secretly get plastic surgery on her boobs and eyes http://t.co/gPSrnixGV8 pic.twitter.com/0nyOOdHFxL

According to the report, Gisele went under the knife to fix her “sagging” breasts as well as have work done to her eyes.

So how does Page Six know the burqa wearing woman is Gisele? That could be anyone, right?

Well, Gisele was photographed being driven around Paris by her longtime chauffeur. The day after she was seen with him, the same chauffeur was photographed dropping off two women at the plastic surgeon’s office (the other women rumored to be Gisele’s sister Rafaela).

The next day, the same driver was seen picking the women up from the plastic surgeon’s office before dropping them off at an exclusive Parisian spa. After five days at the spa, Gisele was photographed in the airport leaving Paris wearing a loose fitting top and oversized sunglasses.

A dead giveaway that something strange was going on is the fact the woman’s feet were exposed which is said to be a no-no for Muslim women. After all, that’s the whole point of a burqa: to cover the women entirely.

Page Six reached out to Gisele’s rep who didn’t respond to requests for a comment.

REPORT: Kim Kardashian got fat from her legs injected into her butt