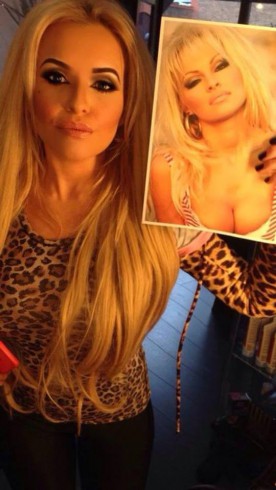 Last night’s My Strange Addiction on TLC featured Carolyn Anderson, who bills herself as the U.K. version of the popular 90s beach babe. She’s spent tens of thousands of dollars on cosmetic procedures to look like her idol, and hundreds of thousands on wardrobe, and now she’s hoping Hollywood wants to capitalize on all her hard work.

Carolyn gets Botox, lip liner tattoos, and dyes her hair bleach blonde to help herself look more like Pamela Anderson. She’s also had a boob job, and is constantly ways to make herself more like Pammie. She makes local appearances as “Scouse Pammie,” Scouse being a nickname for someone from Liverpool.

During her trip to L.A., Carolyn frolicked on the beach where Baywatch was filmed, and met with one of Pamela Anderson’s co-stars, who was impressed with the resemblance. As part of her Hollywood experience, Carolyn went to an audition where they coached her on maybe trying to be herself more often instead of trying to be “Scouse Pammie.”

Despite this advice, Carolyn still seems to be living up the Scouse Pammie life on her social media accounts. She also seems to be garnering international attention, just a few days ago she appeared on a Dutch television show highlighting her “Pamefication.”