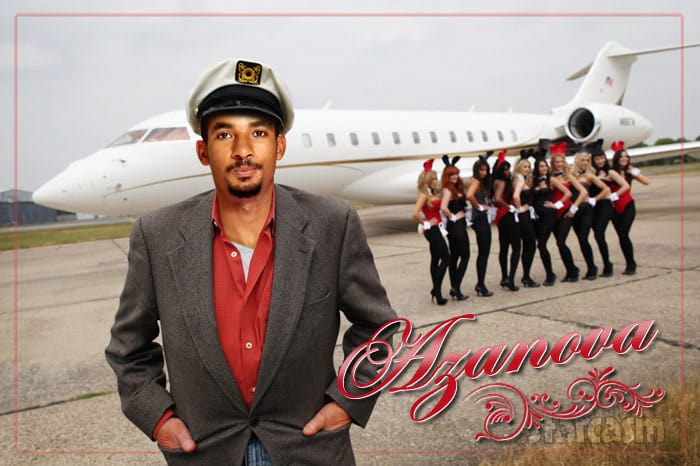 90 Day Fiance star Nicole Nafziger is reportedly back in Morocco right now hoping for her happily ever after with Azan. But a new interview with a receipt-bearing woman from Spain reveals that Nicole may just be one of many international lady ATMs in Azan’s life — and she is reportedly Azan’s least favorite of them all.

The interview comes via 90 Day Fiance Youtuber Keith Brooks, who has been covering the Moroccan Cassanova (Azanova?) story for close to a year now. The woman wished to keep her identity secret, so the interview is audio only — but Keith provides an intro, as well as numerous receipts in the form of photos, text messages, and audio recordings of conversations with Azan to back up the woman’s claims. (I should point out that the woman’s statement has been translated from Spanish and — I assume — read by another woman.)

UPDATE – An astute redditor from the 90 Day Fiance subreddit points out that “the phone service provider shows ‘Vodafone IE’ (Ireland) at the top. If it was in Spain, the provider would have been ‘Vodafone ES.'” If you visit the thread you will see a string of comments calling the validity of the video into question. I have to concede that there are A LOT of red flags here — starting with the English translation and re-reading. And surely this woman has photos with Azan that she could have shared with her face blurred out, right? Hmmm…

Here is a recap of the woman’s claims about Azan, but the interview is well over 30 minutes long and there is A LOT left out — including numerous text messages and more details. So, if you are a serious Azanologist, I recommend you watch the whole video, which is included at the bottom of this post.

Azan worked as a dishwasher at a Moroccan hotel (sometimes he claimed to be a manager and/or a fitness trainer), and it is through his job that he met a lot of women from all over the world. Keith assembled this list of Azan’s international girlfriends present and past based on these sources and their evidence: 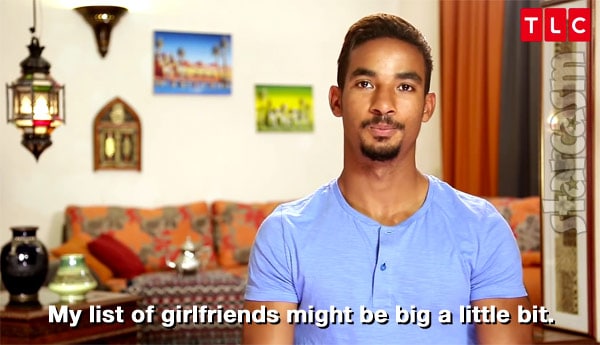 Azan sometimes leaves Morocco to visit his girlfriends; his trips to Russia and Korea come to mind. Other times, he’s invited the ladies to come to Morocco — working around his other girlfriends, of course, including his time filming with Nicole and May.

The woman in the interview, whom I will call Jolene because we do not know her name and because I can, says Azan reached out to her online in August of 2016. Jolene made plans to visit Azan in Morocco in January of 2017, but he asked that she wait until March “because he was going to visit his sick grandmother.” (Apparently “going to visit his sick grandmother” is how you say “filming with Nicole for TLC” in Morocco.)

Jolene started noticing a “fat girl” with a child in the background of Azan’s photos, and he assured her that it was just tourists and there was nothing to worry about. But Jolene then stumbled across an episode of 90 Day Fiance and the cat was out of the bag! Azan did some fancy verbal footwork and assured Jolene that the relationship was just for the cameras and that everything was “fake” and “scripted.”

Azan told Jolene that his family hated Nicole and wanted her to leave. He added that Nicole claimed she was jet lagged for about a month, and so she pushed May on him as far as diaper changes and other care. (Azan admitted that he often used May as a shield against Nicole to prevent her from touching him as much in public.) Also, according to Azan, “All [Nicole] wanted to do was drink beer.”

Jolene let herself believe him, and admits that it was stupid to do so.

Amazingly, Azan also admitted to Jolene that he had a girlfriend in Morocco while Nicole there, something that Jolene was a little hurt by — but apparently not so much that she cut things off with Azan.

“[Azan] would always call [Nicole] Hamburger Helper because she’s always just helping herself to hamburgers,” Jolene claims. She says Azan told her that watching Nicole eat “was like watching a camel eat.”

In March of 2017, Jolene packed her bags and headed to Morocco to see Azanova. She was there for a week and said she paid for everything — his drinks, new clothes for him, and even a gym membership! Jolene says Azan guilt trips you about how poor he is until you finally cave in and give him money or buy him what he wants.

When Jolene returned to Spain, she said she talked to Azan every day. She mentions that he had three phone numbers because he wanted his privacy, and says that he asked her if she wanted to marry him. Jolene was a bit taken aback and asked once again about Nicole. “He didn’t care about her,” Jolene says of Azan’s response. “He wasn’t physically attracted to her, he wasn’t mentally attracted to her. She is just a meal ticket.”

To gauge Azan’s seriousness, Jolene said they should be engaged first and he should get her an engagement ring. Azanova was predictably smooth by saying “OK,” but he needed her to send him some money so he could buy it. Oh, and at some point he became very insistent about Jolene sending him nude photos. 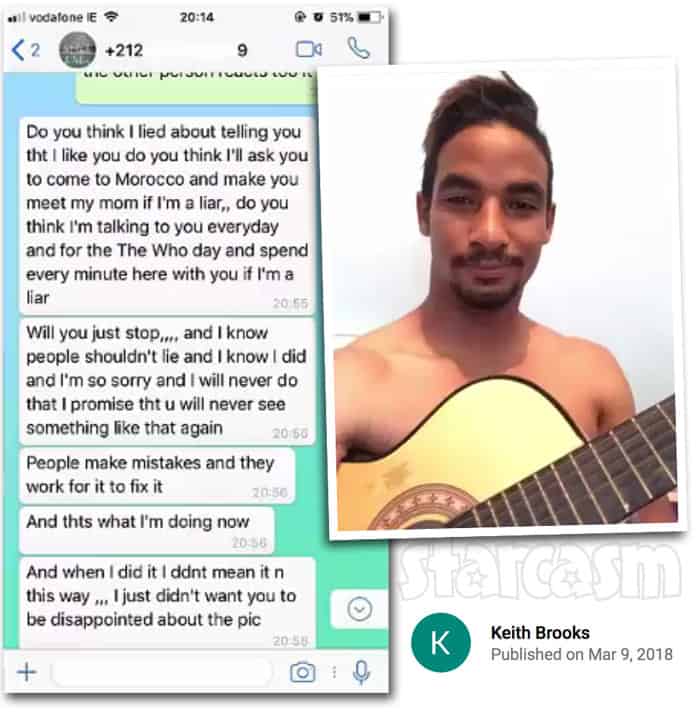 Jolene recalls one particular money grab when Azan, claiming that he was “almost homeless and penniless,” asked for $300. She asked him about his sugar momma Nicole, and he admitted that Nicole sends him $500+ a month, sometimes more. Azan revealed it was enough money that he was able to quit his job, saying “Only suckers work.”

Azan says that his plan is to marry Nicole, then divorce her after three years and bring his Moroccan girlfriend over, at which point they can “live happy” in Florida’s Moroccan community. The reveal of Azan’s “grand scheme” was the straw that broke the camel’s back for Jolene.

“It was the beginning of the end,” Jolene says. “I was just shocked. He was a guy (only a few days ago) wanting to marry me, and now he, like, forgot what he said to me and was talking about marrying someone else so he can go somewhere else and marry a third person. It’s like, I know I’ve been dumb throughout this whole thing, but it was just…this man is just so self-centered, and he just does not care what he says to other people. He’s just a disgusting, disgusting person.

“He told me he dated over 25 tourists from the hotel he worked at,” Joelene goes on. “He would claim to be a fitness trainer and sometimes would get money to take the ladies to the gym.” Azan also spilled the beans on his Russian girlfriend, which he visited for months — during which time he basically just went to the gym everyday.

He talked about his affair with a Korean lady who bought him all kinds of things. (Jolene says Azan has even learned how to speak Korean to help with his woo pitching hustle game.) Azan purchased a one-way ticket to Korea, but after his arrival, he was denied entry. So he got Nicole to buy him a ticket back to Morocco.

Jolene says Azan was thrilled when his visa was denied, and it was after that when Azan essentially ghosted Nicole on social media. (She doesn’t explain why Azan was thrilled, since his grand scheme supposedly involves marrying nicole and moving to the US.)

“Then I just fully stopped talking to him just because I was so disgusted by him,” she says. “He was a liar, he was a cheat, he was a con artist. He’s disgusting. He’s embarrassing. He’s just not a good person.”

At some point along the way, Jolene found Keith’s Youtube channel and she reached out to him to tell her story. He did not respond for a while, but eventually he did — and the rest is now history.

The full video has been deleted.