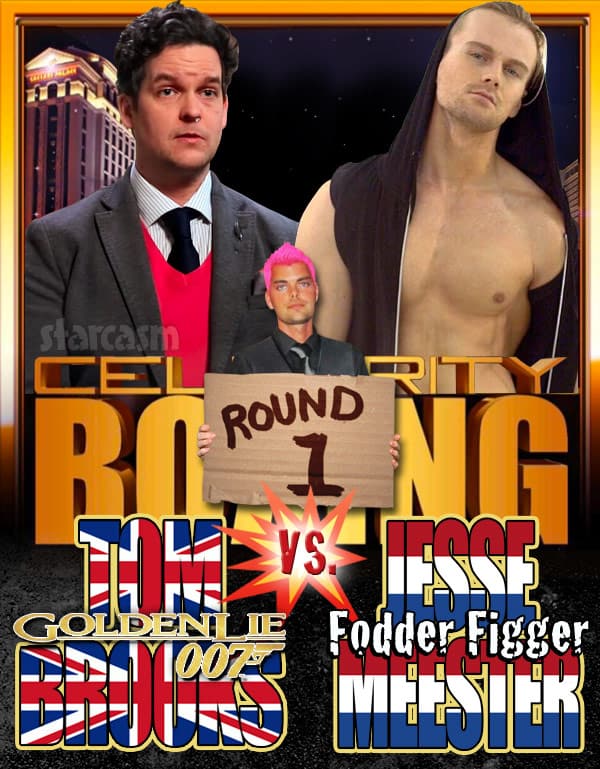 90 Day Fiance: Before the 90 Days star Darcey Silva is having a dream come true as two dashing young men are currently fighting over her in public! The dueling dapper dandies are two men that don’t seem to want to be with her at all, but still!

The bro brawl started when Darcey’s ex Jesse Meester responded to some of the recent episodes of Before the 90 Days after Darcey arrived in England and finally met the online love of her life, Tom Brooks.

For those of you out of the loop, I will start with a very quick recap. During their first day together, Tom was not a complete d*ck to Darcey, and as a result, Darcey assumed they would soon be married and living out their happily ever after on Happily Ever After.

However, Tom wanted to take it a little slow and get to know Darcey before any sort of major commitment. Things got a little awkward when the couple returned to their Airbnb and Darcey said that her designated bedroom had bad mojo. She then visited Tom’s bedroom and demanded to sleep there because of the much better energy. Tom conceded, but insisted that he wear pajamas to bed.

After flopping on the bed and flashing her unmentionables, Darcey then got blackout drunk and bloodied Tom’s nose in her sleep.

The following day, Darcey was back on script in her fairy tale romance as she essentially interpreted having dessert and drinks with Tom as a marriage proposal. She got very emotional yet again because Tom was not being a d*ck to her for a second straight day. Tom seemed a bit startled and put off by Darcey aggressive neediness.

OK, that’s it for the recap set up.

Darcey’s ex Jesse Meester insists he doesn’t watch the show, but he is apparently being kept up to date courtesy of his followers because he responded to the current season on Twitter by not-so-subtly cutting Darcey on the bias:

Jesse followed up his shared quote with some of his own words, in which he not only called out Darcey for her drinking once again, but he also went after Tom for allegedly presenting himself on social media as someone he’s not:

Lol to the people now #jessewasright. Don’t tell me I didn’t warn you… The truth always comes out. I raise my glass to those drinking responsibly, the real entrepreneurs and the real with actual real estate and businesses who don’t need to fake designer to portray fake reality. pic.twitter.com/74mbqUeVnI

Jesse’s social media glove slap to Tom’s face did not go unanswered as Tom responded to the challenge in chivalrous defense of his drunken maiden. “Why don’t you stand up and be a man rather than sit behind a computer screen casting dispersions?” Tom asked in a text graphic posted to his Instagram story.

Tom then challenged Jesse to a boxing match! “Let’s stop the talk and fight in the ring for charity,” he proposed. “I like to judge a man by his minerals, of which you have none Jesse.” Tom suggested that his Before the 90 Days co-star (and buddy) Tim Malcolm could be the ring man, and he added a shout out to his trainer, Christian Westwood.

“Where are you my little Dutch princess?” Tom concluded his initial taunt to Jesse.

Tom followed up his boxing challenge with a series of reflections from Tom Tzu’s The Art of War: 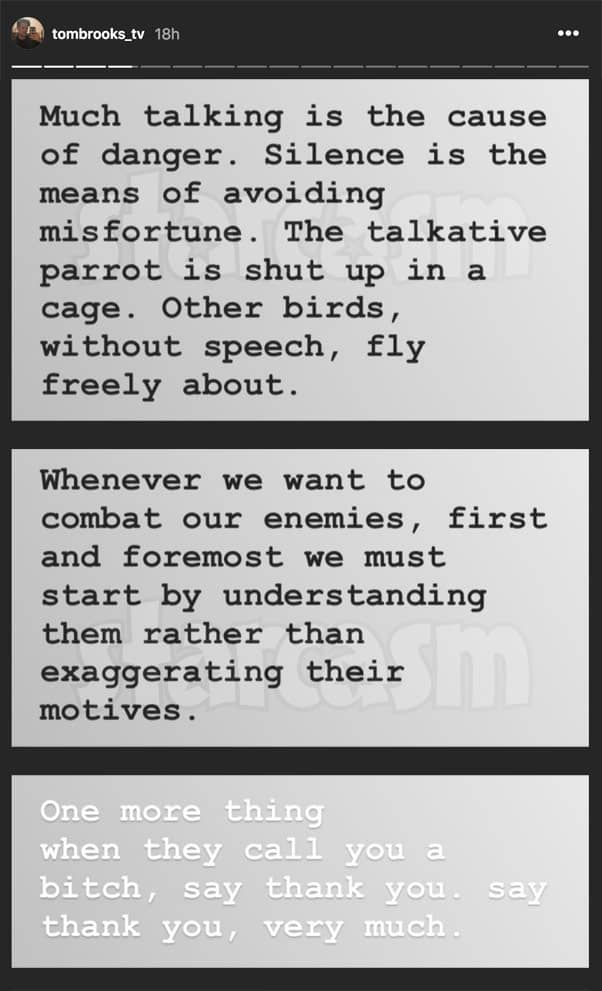 Tom tagged co-star Tim Malcolm in his post, and the result was very similar to tagging a wrestling team-mate as Tim then entered the ring and attempted to Instagram pile drive Jesse by calling him a “coattail rider:” 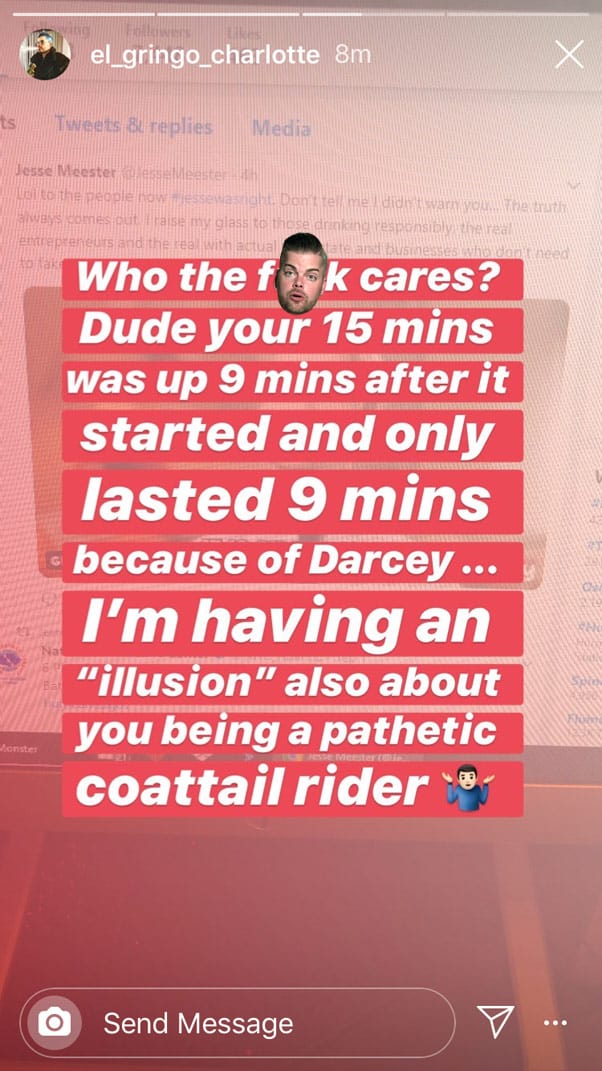 In the Instagram comments, Tom and Tim continued their Jesse offensive as Tim revealed that Tom was apparently a boxer for 20 years:

TOM: A real man doesn’t behave like that l. I think you should organise a pay per view and invite the little bi£(h if he’s man enough

COMMENT: Really? And please tell me how a real Gentleman should act Tom?

TOM: We all have limits

COMMENT: Have you guys SEEN Jesse? He’s ripped. I’m sorry, Jesse would mop the floor with Tim and Tom. I’m not even a Jesse fan but this is ridiculous ?

Jesse hasn’t responded to the boxing challenge specifically, but he did share some of his trademark Meesticism as he reflected on “faking perfection” on Instagram:

I believe mistakes are more of a teacher than a negative thing people perceive it to be. It allows us to learn and experience on what went wrong and reflect on what we could’ve done better. More importantly, it means you’re trying. It allows us to become a better version of ourselves.⁣

Faking perfection, however, is nothing but trying to receive validation from people who don’t care in the first place. It’s not real, you’re lying to them and to yourself. And the truth is no one is perfect and no one ever will be. Every person you encounter will hold different views, to someone you may be a great person but to others, you may seem like a POS. ⁣

You will never be liked by everyone you meet or know. And that’s a good thing. It allows you to focus on the people that matter. Everything and everyone is a working process, only difference is that successful people learn and take responsibility for their mistakes, while others blame or point fingers and become the victim in any given situation. ⁣

When was the last time you made a mistake and what did you learn? Sharing is caring as we can all learn from it.

Jesse signed off with a flower emoji and a link to the Meester Store’s Instagram account, which sells gold and diamond jewelry and promotes Jesse’s coffee brand with some seemingly perfect images.

Darcey also hasn’t responded to the bro-ha-ha that has erupted over her honor, but she did share a photo of Tom showing off his sleeve tattoo as she sings his praises and refers to him as a “living legend:”

Living legend! With my heart wide open and all love. My rock! Perfect gentleman with a heart of gold! ❤️? @tombrooks_tv

you can keep up with the romantic journey of Darcey and her white knight Tom Brooks with new episodes of 90 Day Fiance: Before the 90 Days airing Sunday nights at 8/7c on TLC.

UPDATE – Jesse shared a quote on his Instagram story that reads: “Fake is the new real and I don’t fit in.”

BEFORE THE 90 DAYS Jesse and Darcey are together in New York, like right now!