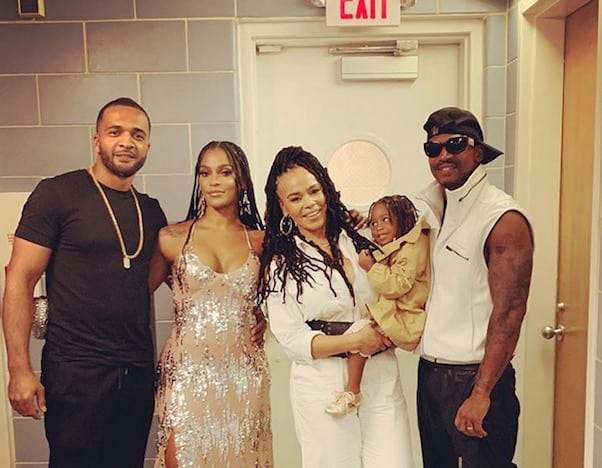 Now that their courtroom brawl is (almost) over, are Stevie J and Joseline Hernandez preparing for a reality TV reunion? The Stevie J custody battle over Bonnie Bella all but concluded this week, after a judge granted temporary custody to Stevie. But he and Joseline were surprisingly copacetic following the verdict, leading to yet more delicious speculation that their rumored reality comeback might actually be happening.

Late last month, Stevie raised plenty of eyebrows after sharing a photo of himself, Joseline, and several of the former couple’s former LHHATL co-stars (plus Joseline’s new boo DJ Ballistic). The caption for the photo was what set everyone off: “Cast for my new show,” Stevie wrote, adding a ” 😉 ” for good measure. It’s possible that Stevie was just teasing everyone — but that didn’t stop everyone (us included!) from hoping that a legit new show was in the works.

Now, those plans may have overcome a major hurdle, in the form of Stevie and Joseline’s acrimonious court fight. According to Bossip, the Stevie J custody battle is now functionally over. Just before Labor Day weekend, the judge in the case signed “a temporary order awarding Stevie primary physical custody of Bonnie…with Joseline having visitation.”

Per the arrangement, both Stevie and Joseline are required to “take a parenting class” before their next court date, which so far is scheduled only “in the fall.” Additionally, Stevie is freed of the $1,000 monthly child support checks he’d been cutting for Joseline; now, whichever parent has Bonnie is solely responsible for her care.

Now, Stevie had been arguing that he was the “more mentally and financially capable” parent, which definitely caused a few guffaws among his followers. Last year, a separate judge found Stevie guilty “of knowingly withholding child support payments for his son and daughter over eighteen years,” and ordered him to pay $1.3 million in restitution. (Here’s a complete list of Stevie J’s kids and baby mamas, with photos.) Stevie also faced jail time more than once during that particular legal battle.

At the same time, it wasn’t too long ago that Joseline’s hairdresser called her a “coked-out scam artist” and claimed Joseline had tried to cheat her out of several hundred dollars in salon bills. And Joseline’s new show was apparently not greenlit at WE tv, despite much fanfare when it was announced. So she may be looking for a way back into the reality TV game — and she and Stevie are both aware that any reunion involving the two of them is sure to get some ratings.

Just before the judge’s verdict, Stevie shared a second surprising family photo — the one at the top of the article — featuring himself, his wife Faith Evans (holding Bonnie Bella, no less), Joseline, and DJ Ballistic. Then, just after the verdict came in, Stevie took to Instagram with baby Bonnie to celebrate:

Grateful for Co parenting. Thank you for being supportive my lovely wife, I need you always. @therealfaithevans @mimifaust Hey @joseline @balisticbeats much respect & love

Joseline, playing awfully nice — or maybe just genuinely OK with everything, who knows! — has the top comment on the post: 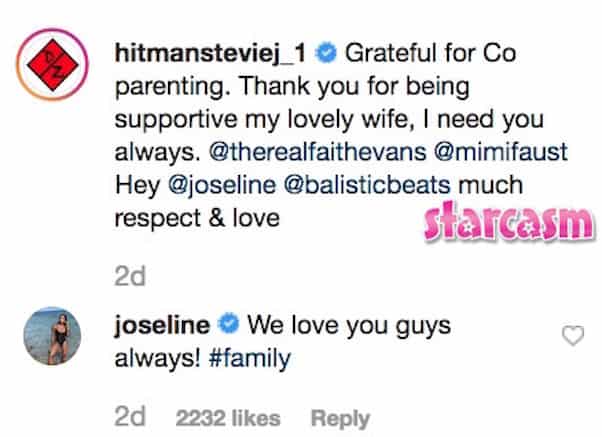 Now that Stevie is done with Love & Hip Hop Atlanta, and Joseline remains without a reality TV home, would you be into a brand new show featuring the two of them?

Take that Nike, Tiger’s wife Elin Nordegren to be face of Puma?