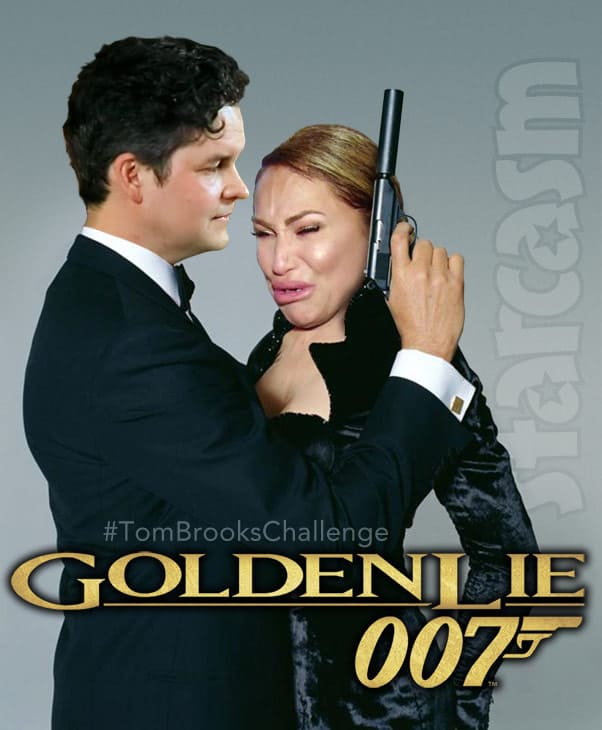 Before the 90 Days star Darcey Silva is completely smitten by her debonair British beau Tom Brooks, who presents himself as a wealthy bloke living quite the lavish bachelor lifestyle. Just a couple weeks ago, Tom’s Instagram feed included numerous photos of designer products, exclusive events, and exotic destinations — all of which seemed to present him as the James Bondish businessman and traveler that Darcey fell in love with.

However, the spy who liked her is apparently less GoldenEye and more GoldenLie as 90 Daytectives reveal that Tom was reposting photos and videos from other accounts.

The main social media supervillain responsible for taking away Tom Brooks’ license to shill his online persona is Instagrammer @FraudedByTLC. The account has been relentless with its take down of Tom this season, and it started with claims that a scene featuring Tom’s ex-girlfriend was all completely made up.

“Y’all this derpy derp is not the lothario he makes himself out to be!” the account captioned a photo of Tom on August 18. “We have an upcoming scene where he introduces Darcey to his alleged former girlfriend of 5 years, who it turns out, is just a woman he happened to know of and had lunch with once, and when they arrived at the club, he sprung on her to pretend they had been in a relationship for 5 years.”

That was followed up by another post on the same day with more details on the alleged fakery:

The scene that was filmed about 6 times total (for 1 scene, several that night and they all came back the next week to film it again). This woman is there and was not aware that she was supposed to be playing an ex girlfriend because she never dated him! He asked her to do him a favor and show up so she and her friend did and THEN he tells her oh yeah pretend we dated for 5 years. TLC tried to get her to fly to NYC this weekend for the tell all, or to appear on Skype and she told them no after she found out what bullsh*t story they were trying to give her. (FYI, all this comes from interviews with one of the friends who was there. The girl referenced signed an NDA that she is not violating).

Heavily crafted story lines are nothing new for 90 Day Fiance fans, especially on Before the 90 Days. However, @FraudedByTLC later began their methodical take down of Tom’s social media persona — and the results were quite unprecedented! As mentioned above, Tom’s Instagram feed was packed with lots of photos of designer products, exclusive events, and exotic destinations — most all of which were revealed by @FraudedByTLC (and the account’s followers) to be bloody bogus. (I will include numerous samples at the bottom of this post.)

Tom has attempted to maintain his “debonairness” by casually rebuffing the accusations with various explanations. He initially stated that the posts in question were merely sponsored spots. “I have deleted all the paid promotions as to not cause confusion,” Tom explained in response to a comment about him stealing photos and videos.

After his account cleansing, Tom was down to just a handful of images.

However, the photos and videos that Tom re-posted and later deleted did not appear to be “paid promotions,” and some of the original posters of the images stated as much when asked about Tom’s re-posts. So, Tom shifted gears and put a new spin on things.

“It’s commentary on consumerism,” he later explained. “So easy to find,” he pointed out. “Just being cheeky.”

In a later explanation, Tom stated that there were “6 photos of which three were a personal joke with a friend.”

Conceivably, Tom’s math still works, but only if three of the photos were paid promotions, and three of them were a personal joke that also served as commentary on consumerism. The math falls apart when you consider that there are at least ten images and videos specifically referenced by @FraudedByTLC.

Fans wondering “Who is the real Tom Brooks?” were further confused this week when Tom posted a photo showing off a rather large sleeve tattoo:

The tattoo certainly doesn’t seem to line up with the gentile tweed jacket, red vest, and tie-wearing British goober we see on screen! In addition, the photo sparked a conversation in the comments section in which Tom reveals that he has a daughter. Either that, or he is being cheeky:

COMMENT: Your tattoos are amazing! Do you have anymore?

TOM: The one of my daughter.

The tattoo and creative use of angles aren’t the only thing that makes Tom’s appearance on Before the 90 Days seem a bit inaccurate. Check out these deleted photos of Tom from before the show, in which he doesn’t look like Colin Firth playing Doctor Who at all: 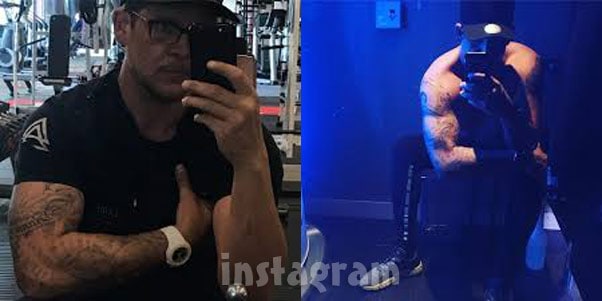 There have been accusations that Tom actually lives with his mom in England, but Tom explains that he lives in Argentina and is only in Great Britain to take care of his ailing mother. “I am in the UK as my mother has been sick,” he explained to one commenter. “I live in Argentina, but am back for her, so people can say what they wish.”

Tom also mentions that he has a home in Birmingham that he is apparently planning to rent when he returns to Argentina in October. “That’s my place in Birmingham getting it ready to rent,” he explained on Instagram. “My parents live in what was Colonel Clifton’s home 36 rooms but why so much interest??? I stay in the east wing.”

@FraudedByTLC points out that “Colonel Clifton’s home” appears to be Clifton Hall:

So… James Conned lives in a rented public housing apartment with his parents?

If you’re curious as to why Tom lives in Argentina, that is because his business is there. According to his LinkedIn profile, Tom is the co-founder and Commercial Director for a company called Fit Nation SLR. The company (which is actually called Fit Nation SRL) looks to handle Argentinian sales and marketing for the Braziliam women’s fitness clothing line LaBella Mafia.

There have been some major question marks as the the legitimacy of Tom’s connection to LaBella Mafia, but two other men that clearly are associated with the brand (and with Fit Nation SRL) have posted numerous photos with Tom as part of a business team. Here are a couple samples:

Tom is also listed on the company’s official business declaration, although it is under the name Thomas Brooks. In the declaration, he is listed as being British and single — so, no major surprises there. The declaration indicates the business was started in May of 2017.

Meanwhile, Tom’s affinity for misrepresenting himself on social media has inspired the #TomBrooksChallenge hash tag in which folks are gleefully taking inspiration from Tom by being “cheeky” with their own “personal jokes with friends” in the form of altered photos that over-glorify Tom’s awesomeness. We answered the challenge with the James Bond GoldenLie photo at the top of this post, and we encourage you all to give it a shot! Tom seems to be enjoying it, and he is sharing many of them on his Instagram feed and in his stories.

I will wrap up this post with a series of #TomBrooksChallenge entries, followed by the #evuhdense posted by @FraudedByTLC in regards to his misleading “Tom foolery.”

Tonight was the unveiling of Tom's Tower, or so I heard. It looks… familiar. #tombrookschallenge Don't worry, picture of @tombrooks_tv not stolen ? #90dayfiance #90dayfiancebeforethe90days #90dayfiancememes

*EDIT* apparently Tom is loving these and asking they be sent to him. I have him blocked but feel free to send away!*. #tombrookschallenge tombrookschallenge happening today all over the ‘gram. Check my stories. ???

More evuhdense of Tom’s frauding. Original IG post on the left. Note the poster and the date. June 25. Note his post on the right. Exact picture as if it’s his own, a month later on July 26. He’s trying to pass it off as his own “luxury lifestyle” picture. ??‍♀️ Credit to follower @dragonfly_123456 for the find! There is also a video he stole, at this time currently still up. #sorrynotsorry #90daytheotherway #90dayfiance #90dayfiancebeforethe90days #followthefraud #fraudedbytlc #tombrooksisafraud

This private jet video was posted by @bjornded_mc profile June 27. Tom follows that up in July with an exact replica. Aka, he steals that one too. With his own caption. Credit: @dragonfly_123456 #90daytheotherway #90dayfiance #90dayfiancebeforethe90days #fraus #followthefraud #fraudedbytlc #tombrooksisafraud

Now he’s just getting lazy. He kept the same caption? Original post June 29. Tom re-purposing it for his own July 5. Credit again to the superior 90 Day fan group. Also, these are sloppy I know. I’m trying to get them up and y’all are fast! 90daytheotherway #90dayfiance #90dayfiancebeforethe90days #fraud #folllowthefraud #darceyandtom #tombrooksisafraud

This guy, @lvip_mario already discovered Tom is a picture thief and called him out on it. Must have worked because I don’t see that picture in Tom’s IG. UPDATE: Tom has several of this guy’s pictures but removed them all when called out on it. #90daytheotherway #90dayfiance #90dayfiancebeforethe90days #fraud #followthefraud #fraudedbytlc #darceyandtom #tombrooksisafraud #youcantbuyclass

Now he’s saying they were paid promotions? Uhm no. Not for you and not for the people you stole them from. I personally spoke with several of the original victims and they were not paid promotions. Just shut your mouth. The more you open it, the more BS spews out. Thanks to @lovemy4_75 #90daytheotherway #90dayfiance #90dayfiancebeforethe90days #fraud #followthefraud #fraudedbytlc #tombrooksisafraud #darceyandtom

BEFORE THE 90 DAYS Paul is back in the US, but is his pregnant wife Karine with him?

BEFORE THE 90 DAYS Angela Deem’s DUI arrest was 2 hours after her male companion was arrested for DUI!

EXCLUSIVE Before the 90 Days’ Jon and Rachel got married in England in May!