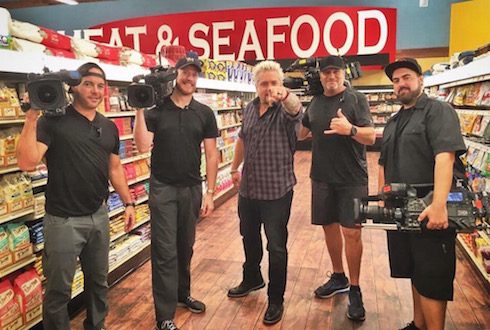 The Guy’s Grocery Games set is just as much a character on the show as host Guy Fieri himself. After the unexpectedly huge success of the competition show’s first season, producers went to extreme lengths to make their new set look like an actual store. But does Guy’s Grocery Games use a real grocery store for filming? And do they really keep it stocked with that much food?

When Guy’s Grocery Games debuted in the autumn of 2013, it really did film in a real grocery store: the Fields Market in West Hills CA. That grocery store — which still exists — is a locally owned neighborhood supermarket, in line with Fieri’s beliefs about keeping his production as close to home as possible.

But it was also located in Southern California, and Fieri decided he wanted to be closer to family — as well as the farms and chefs he knew well from back north. So, in between Seasons 1 and 2 of the show, the Guy’s Grocery Games producers leased a huge building in an industrial park in Santa Rosa — 424 miles to the north — and commissioned a store of their own.

Per the North Bay Business Journal, “Flavortown Market,” the 15,500 square foot Guy’s Grocery Games set, was built in a grand total of two weeks. All the most important details, like checkout lanes and refrigerators and freezers, are real and really do work. (The walls, according to the Business Journal, are “painted plywood panels anchored to the warehouse walls.)

But television’s amplifying influence held true for the new digs: like the West Wing version of the White House and countless other TV reproductions of real places, the show’s version of a supermarket is just a little bit bigger and more comfortable than the real thing.

“The aisles are wider, the lighting is better, so it makes it easier for the chefs to shop and see what’s on the shelves,” Fieri said at the time. “Going along with the shelves, the culinary team has stocked and set them up so they’re far more shopper-friendly. There are a lot of great markets around the country, but I wish Flavortown Market really existed.”

Here’s Guy Fieri himself giving a quick tour of his new set shortly before filming a new season back in 2014. Flavortown Market is “Literally the greatest grocery store you will ever find in your life,” he marveled:

All the items on the shelves are actual food ready to be cooked on the show. And, as Food Network has explained, the shelves aren’t filled out with props. There are a total of 20,000 cookable items on the Guy’s Grocery Games set, among them 241 types of produce, 67 different meats, and a weekly intake of 442 pounds of seafood.

Keeping all that inventory stocked is a full-time job: every Monday morning during filming, crews take a full three hours to “restock and refresh” every section on set. But they aren’t the only ones working toward the same goal. The set receives regular deliveries from farms all around the Bay Area: produce arrives on Mondays; baked goods on Monday and Thursday; seafood on Friday or Saturday.

Not only that, but the food that comes in is catalogued just like it would be in a working grocery store:

All products, no matter how big or small, are processed through an actual inventory database system used by supermarkets. UPC codes are entered into the system so that for certain challenges, such as Budget Battle, they can be scanned at checkout lanes with actual receipts produced.

And, lest you think the above information is mere Food Network puffery, here’s former Guy’s Grocery Games host Brandi Milloy to assure you that the setup is no joke:

Flavortown Market…is massive, and their culinary team works hard to get fresh produce, unique products, and rare foods (like rabbit and uni) stocked and ready for the contestants. And when I say stocked — I mean there’s no such thing as a “fake aisle.” The shelves have products all the way back. However, since only some of the food gets used, I learned that the show makes a huge positive impact on Sonoma County’s community, by donating the extra food to local organizations.

What happens to all the food once Guy’s Grocery Games is done filming?

According to the network, “nothing is allowed to go to waste.” Just as all the inventory is logged into the system with meticulous care upon arrival, it’s checked out and sent to the appropriate farm, food bank, or crew member’s refrigerator when it’s about to expire.

“On Friday night,” the network explained, “the bread, meat and seafood cases are checked for items that are close to expiring. Products that are still good are donated to local food banks. And even the food scraps left over from cooking don’t go to waste — they go to a local farm for animal feed.”

The show also keeps up a waste management recycling program, but tries to send as much as possible to either local farms or local food banks and charities. (The Redwood Empire Food Bank, Worth our Weight Culinary Apprentice Program, and Doug the Farmer are frequent recipients.)

New episodes of Guy’s Grocery Games — currently in the middle of its 18th season! — airs Sunday nights at 8 on Food Network. The show also airs reruns in handy dandy block form at various points throughout the week.