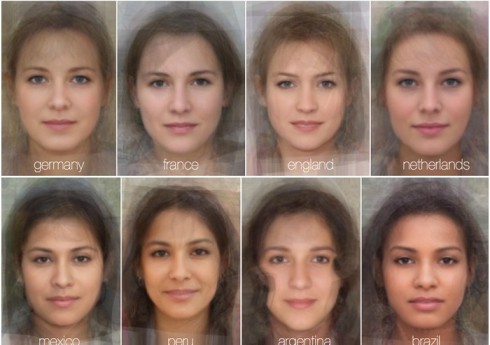 Researchers from the Institute of Neuroscience and Psychology at the University of Glasgow recently refined the 40 images previously released of the “Average Faces of Women Around the World.” The results are pretty amusing — albeit questionable.

Here’s a look at the full image…

Researchers Lisa DeBruine and Ben Jones used the same computerized composition tools for this experiment as they use on their website, FaceResearch.org. They did not explain how many images were used to make the “averages” or how the actual subjects were selected. However, many people guessed they worked primarily with beautiful, young women. (The researchers say large sample sizes wipe out “facial flaws,” such as asymmetry.)

A previous version of these pictures was published in 2011. At that time, Jezebel said the “averages” were statistically flawed, citing the light-skinned woman from South Africa was not representative of a country whose population is 78 percent black. The updated version appears to correct that.

Even if you disregard the purported scientific value, the pictures are still kind of fun to look at — especially for us Americans who are “average compositions” of our own heritages.