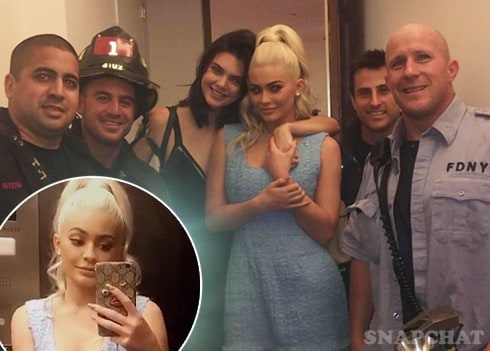 The trio got stuck in an elevator but somehow managed to survive the ordeal after eating the only food on hand, a single Nature Valley granola bar. Thankfully the celebrities, along with model Jordyn Woods, looked fabulous enough to Snapchat the tense situation.

“We’re actually stuck in an elevator in real life, like I never thought this would actually happen. I’m genuinely so terrified,” Kendall said.

“So my worst nightmare just happened; we are stuck in the elevator,” Kylie added.

An FDNY spokesperson told NYDN that they received a stuck elevator call at 7:33 p.m. Some of New York’s finest arrived at approximately 7:40 p.m. according to a timestamp on Kendall’s phone.

“You’re a lifesaver — thank you,” one of them proclaimed among a chorus of excited squeals.