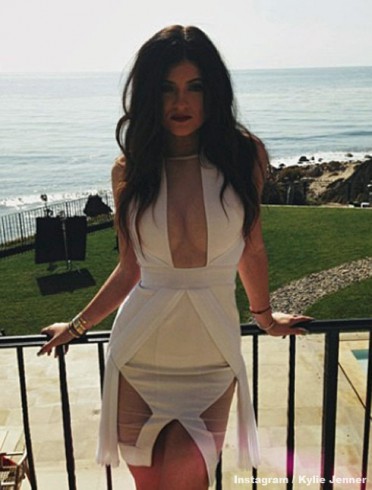 Kylie Jenner and her entourage spent the Memorial Day weekend in Monaco, laughing riotously at the Grand Prix and having a marvelous time. Kylie took to social media to share a bevy of behind-the-scenes photos from the event, and, whether she was sitting still with Tyga, being alone in front of a racetrack,  or yachting it up with assorted friends, K-Jen was all over it.

Then, she came home, and this happened:

The full text accompanying the image is as follows:

Lets ask ourselves…
Why did I see 75 planes spraying white stuff into the sky on my 15 minute drive to work?
Who pays for this and why is it happening?
Is something being exterminated here?
Is that something me?
Does this have anything to do with why Honey Bee’s are Dying off really fast?
Why are some days normal with no planes spraying and others look like this?
Who is responcible?
What effect will this have on our health and our childrens future?
WHO THE F#*% THOUGHT THIS WAS A GOOD IDEA?
Am I the only one who sees this?

Kylie then asked her fans to follow The Mother of Dogs, an account that advocates on behalf of shelter dogs, on Instagram. The account appears to be legit; like many of Kylie’s tweets, it could just be a random shout-out. But it could be something more…

Not too long after the jet plane image, Kylie did tweet out that she was perhaps a bit foggy-headed:

So that could be the reason for the strange, out-of-character tweet. Or, Kylie is onto something, and the chemtrails are affecting us all, but she’s the only one who can see that. Well–Kylie…and the desperate honey bees…

PHOTO Tyga got a Kylie Jenner tattoo on his arm, to prove his love is real