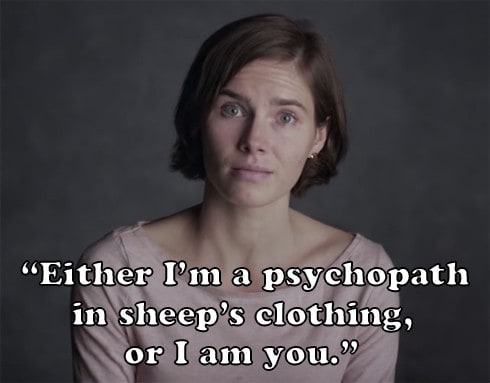 Netflix has released two trailers for the highly anticipated documentary Amanda Knox, set to be released on September 30.

Knox, an American, and her boyfriend Raffaele Sollecito, an Italian, were accused of murdering her British roommate Meredith Kercher in Italy in 2007. Knox was initially found guilty in a salacious trial that garnered headlines globally. She was sentenced to 26 years in prison before being released in 2011 after a successful appeal.

A retrial was ordered by Italy’s highest court in 2013. On March 27, 2015 Amanda Knox was definitively acquitted of the murder.

In the the two dramatic previews, Netflix challenges viewers to “Suspect Her” and/or “Believe Her.” At one point Knox looks directly into the camera and says, “Either I’m a psychopath in sheep’s clothing, or I am you.”