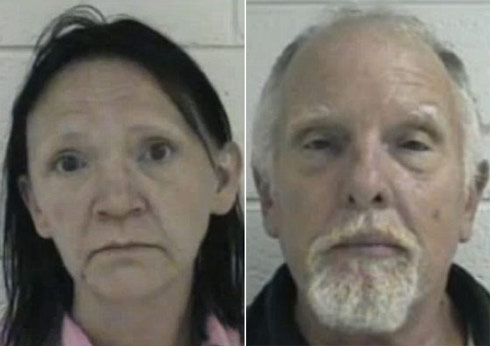 A federal grand jury has charged a Tennessee couple with selling their daughters to create child pornography.

The investigation into Connie, 40, and Ronnie McCall, 61, began last year when officials began looking at possible charges of child neglect. Investigators stated that the couple’s 4 daughters, ages 5, 12, 15, and 17, were living with the two inside their trailer in Johnson City, Tennessee.

D.A. Tony Clark told WCYB that Johnson City Police first uncovered “deplorable” living conditions at the residence in the summer of 2012 and arrested the two for neglect. When the youngest child was taken in, several if not all of her teeth were rotten. There was animal waste inside the home, Clark stated. The youngest also reportedly had head and body lice, flea bites and ring worm.

When the girls were questioned, the investigators became aware of alleged unspeakable nightmares as the children conveyed how they had been rented out so that others could manufacture child pornography of them. Clark added:

“There was money that changed hands between the individuals that were taking pictures and the parents. The children said that they had been taken to various locations and performing sex acts with an adult. When you have parents allegedly making money off their kids through pornography and exploitation, even after 20 years, it’s one of the worst cases I’ve ever seen.”

At this point the children were already removed from the home and the investigation was transferred to the F.B.I and the U.S. Attorney’s office.

The children are in a foster home and are said to be in good condition. Officials are hoping that all 4 girls can be adopted together so they can remain as a family.

Clark stated that a Tennessee man who is believed to have filmed and had sexual contact with the children has since committed suicide.

In addition to state charges, the McCalls could face up to 30 years in prison if convicted. Ronnie McCall has already plead not guilty. Connie McCall is set to be arraigned on Wednesday. Prosecutors also believe that the couple were strung out on bath salts at the time.