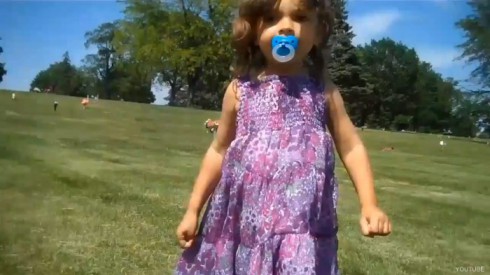 The past couple months have been an all out media blitz from Teen Mom star Farrah Abraham, who seems bound and determined to hit the ground running when the fourth and final season of the show comes to an end in a couple weeks. In addition to her line of Mom & Me food products that officially launched in early July, Farrah finally released her memoir My Teenage Dream Ended as well as an accompanying musical soundtrack.

Her first single, “Finally Getting Up From Rock Bottom,” caused quite the stir when it hit the internet last week, and now Farrah has released her second single from the album titled “On My Own” with a homemade music video!

The video features Farrah and her daughter Sophia — first playing on a swing, then footage of the two of them at the grave site of Sophia’s father Derek Underwood, and finally the two of them walking towards the horizon on a sidewalk.

The song is based on the “On My Own” chapter in Farrah’s book just after she found out she was pregnant. She had just broken things off with Derek Underwood and after yet another acrimonious phone conversation with him, Farrah decided she wasn’t going to tell him about the baby.

The chapter includes what to me was the crux of the entire book, which was mostly about Farrah’s relationship with Derek Underwood and the effects his tragic death in a car accident before Sophia was born has had on her and Sophia’s life since:

Looking back, I can’t help but question whether or not I made the right choice. Of course, if I had known he was going to die I would have told him about the baby — even if he was still partying and treating me badly. I would have taken whatever I could get. But these are the questions that haunt me: Would he have changed? Would he have still gone on hooking up with other girls, doing drugs, and drinking? Would he have been fighting and arguing all the time because I didn’t agree with the choices he was making?

Would he have died anyway?

And here are the lyrics, as best as I could decipher them (with question marks in place of the words I didn’t feel comfortable even guessing at):