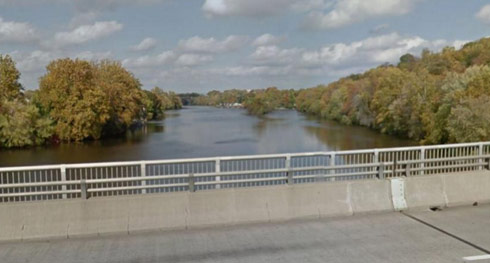 On Sunday afternoon witnesses said that 19-year-old Johnesha Monae Perry pushed her 1-year-old baby in a stroller out on to the Hamilton Street Bridge (pictured above) in Allentown, Pennsylvania. She took her young son out, tossed him over the edge into the Lehigh River and then climbed over the railing herself and jumped.

According to police, Perry walked out of the water on her own and then collapsed. Officers rushed to the scene and located the baby floating approximately 700 yards down river. Via The Morning Call:

The quick actions of the officers saved the baby’s life.

Both mother and son were taken to area Cedar Crest Hospital. Perry was arraigned at her bedside while being guarded by Lehigh County Sheriff’s deputies. She has been charged with one count of attempted murder, two counts of aggravated assault and one count of endangering the welfare of a child. She is being held on $100,000 bail and will me moved to the prison once she can be released from the hospital.

The baby boy is said to be in “very critical condition.” Allentown Police Capt. Bill Reinik added, “At this point, we don’t know what to expect.”