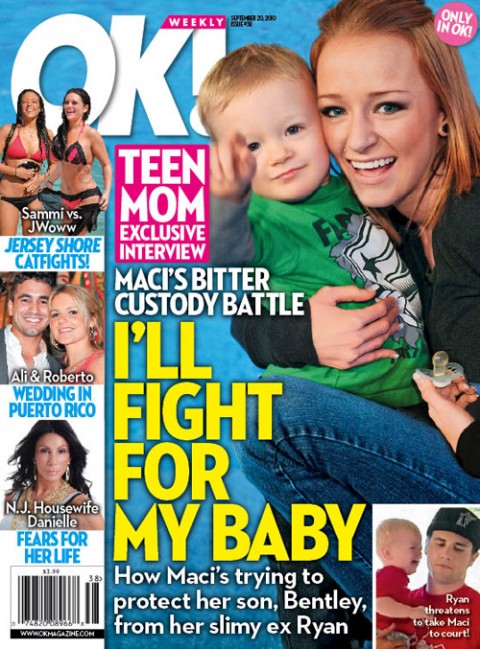 Teen Mom’s Maci Bookout and Ryan Edwards are currently in a legal drama over the custody of their toddler son Bentley. Ryan, who had to be taken to court to pay child support, wants more custody of his son after Maci moved to Nashville, which is more than 100 miles away from their hometown of Chattanooga.

On camera Ryan has always seemed detached from his responsibilities as a father.

Maci left with Bentley to be closer to her new boyfriend, (a long-time friend) Kyle King, who seems to already be a more engaged father figure to Bentley.

From the footage we’ve seen of him on 16 & Pregnant and Teen Mom, Ryan Edwards was never really that interested in the child he shares with Maci Bookout.

Early in 16 & Pregnant he would return from work to the apartment he shared with Maci after working and partying long hours and not even say hello to his baby son Bentley.

Later, when the couple where living with their parents, Ryan, who was then unemployed while Maci was going to school and working, would refuse to wake up in the middle of the night to check on a wailing Bentley.

When their tumultuous relationship finally ended on the first season of Teen Mom, a tearful Maci explained that she found it hard to love Ryan because it didn’t bother him when he didn’t spend much time with Bentley.

Here’s the episode. The break-up scene is at the beginning of the last section:

A source told OK! the what seems obvious based on what we see on the show:

“Ryan’s threatening Maci with court to prove a point. Not because he’s desperate to have Bentley fulltime. He’s doing it to hurt her.”