Snooki smushed her chest grenades and poured her little brick house into a tight-fitting charcoal gray dress topped off with a Audrey Hepburn-worthy over-sized floppy hat that would have been applauded at any respectable Hamptons soiree. I’m not sure what to call this look, but I’m thinking along the lines of a dessert… Perhaps “orange zest cupcake?”

Apparently the party was held at least in part aboard a yacht, and it didn’t take long for the headstrong Snooki to assume control of the ship! Here she is in a photo she posted earlier tonight which she introduced by tweeting, “Captain snooki taking over the frownies yacht! Sry @JonathanCheban lol!” 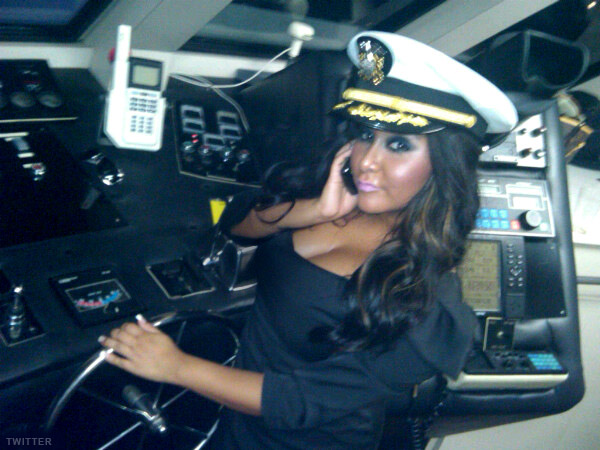 I can really enjoy Snooki steering the Jersey Shore crew into yet another season of action-packed drama-filled hilarity, but I’m a little nervous seeing this photo! (Did they send out some sort of warning to other ships in the area? How about to the people on the yacht?)

Here are some more photos of Snooki being Hampton chic and having her usual good time:

Above photos: RE/Westcom/Starmaxinc.com via Newscom
Photos below: Toby Canham/Getty Images

J Woww and Snooki self deprecate on Flow and Nancy Show