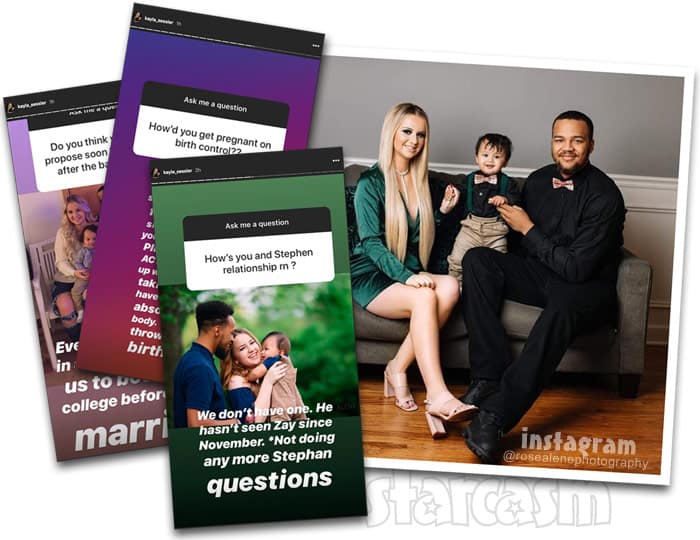 Teen Mom: Young and Pregnant star Kayla Sessler participated in an Instagram Q&A session with her followers this week. The pregnant reality star answered a wide array of questions ranging from her ex Stephan, how she got pregnant the second time while on birth control, and her relationship with new boyfriend Luke.

We will start with her son Izaiah’s dad Stephan. One follower asked Kayla how their relationship is right now, and she responded by revealing: “We don’t have one. He hasn’t seen Zay since November.” She then nipped the potential for any more inquiries about Stephan in the bud by stating that she would not be answering any more questions about him.

As far as her current pregnancy, Kayla says that it was “definitely not” planned and that she was on birth control at the time. She then responded to a follow up question asking how she got pregnant while on birth control:

Ladies! If you are on the pill and you get sick with the stomach flu or any other sickness that causes you to throw up, YOUR PILL IS NO LONGER ACTIVE! If you throw up within 2 HOURS of taking it. It didn’t have enough time to absorb into your body. You;re literally throwing up your birth control.

Someone recommended that Kayla try the Depo-Provera shot, but that was something Kayla had already tried. “Right after I had Zay I got on the depo shot!” she reveals. “Unfortunately I got sick from it so went on the pill. After this baby I will be trying the IUD implant!”

Speaking of “this baby,” Kayla tackled a few questions about that topic as well. Shesays that she will be making a gender reveal on March 16 before then responding to a questions about whether or not she and Luke have any names picked out. “For a girl I like Bria or Aubree,” Kayla says. “No clue for a boy because Luke is stuck on Luke IV 🙄🤦🏼‍♀️.”

On the topic of Luke, Kayla clarified a little bit on their dating timeline. “I’ve been seeing him since December 2017,” she reveals. “However, we didn’t make it ‘official’ until last August.” She says her mom approves of Luke 100%, although her mom’s approval isn’t as huge a deal as it was before because Kayla moved out of her house back in October.

So, first came love, then came baby in a baby carriage — what about the missing second step? Can we expect a proposal soon? “Eventually, but I’m not in a rush! I’d prefer for us to both finish college before getting married.” 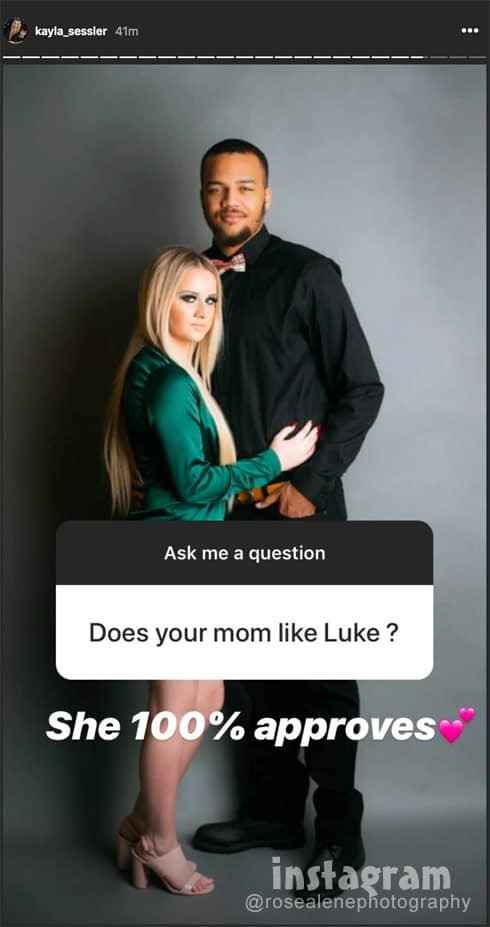 Unfortunately, Kayla finishing college might take a little longer than expected. “Sadly, I had to take a small break from school,” she later reveals. “But once the baby gets here I will be going back! I’ll probably start with online classes before actually attending class. It’s taking me longer than I hoped, but the important thing is I will get my degree.”

Kayla announced she is pregnant again in February, and last week she shared a 15-week baby bump photo. As mentioned above, she plans to do a gender reveal on March 16 — so stay tuned!

TEEN MOM Brianna Jaramillo talks about son Braeson being born with no left forearm, is no longer with transgender bf Danae