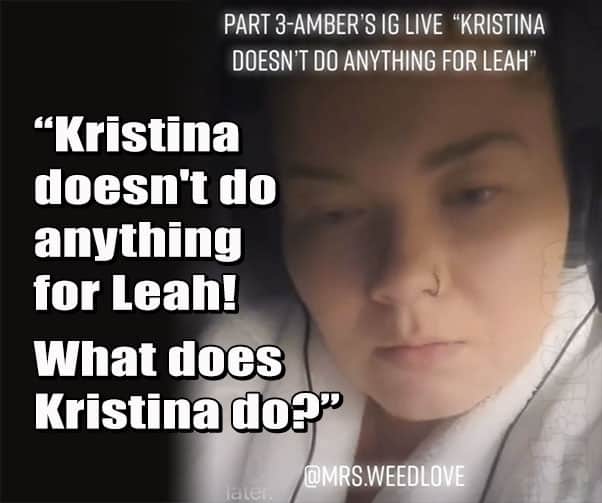 On the most recent episode of Teen Mom OG, Amber Portwood’s daughter Leah expressed her frustration over Amber’s lack of involvement in her life. “Twelve years and she hasn’t really done anything,” Leah tells her dad Gary and stepmom Kristina as an explanation for why she doesn’t want to invite Amber to her birthday party.

Leah was not convinced. “All she did was give birth to me, and then she just kind of left me.”

Gary continued to try to convince Leah to not shut Amber out, and eventually Leah conceded to inviting Amber to her birthday party.

After the episode aired, Amber got way up on her high couch and took to Instagram live for an enraged b*tch sessions in which she absolutely trashed Kristina. In addition to the live stream (recapped below), Amber also typed out her frustration in the comments section of her Easter Instagram post.

Amber posted a wonderful photo of herself and Leah and captioned it with a bit of humility:

I know you are going through a lot and there are many things I need to do to make things right. However, I will always love you, my beautiful daughter. Love you 💕and Happy Easter 🐣

The obviously anti-Amber account @mother_goddess_machete_queen trolled Amber a bit by bringing up Amber’s son James, whom Amber is not allowed to post photos of. “Where’s the pic of you and James..oh yeah I forgot,” the account wrote, adding a few shocked face emoji.

Amber didn’t take to kindly to the comment, and she went off on a rant calling out Kristina for not posting photos of her daughter from her previous marriage:

@mother_goddess_machete_queen I have 1 question for her…How does it feel knowing she doesn’t have joint custody of her daughter the same as me because shr chose this life over her. Shr has no excuse for that. Not one thing!

She should be ashamed to even act like she’s such a great mother. SHE HAS NO PICTURES OF HER OWN DAUGHTER ON HER INSTAGRAM.. Honestly it’s sad. And I feel for her..

Remember I use to talk to HER daughters “bonus mom” and I was told everything! She can’t even have her daughters name mentioned on the show! People come at me like I’m a mess when the truth is I’ve been keeping a lot of secrets from people. Where’s her own daughter in any picture? Be honest.

Yes I made mistakes however I have changed for the better!! She’s not a bonus mom she’s an opportunist who cries if Gary doesn’t by her a coach bag….truth..and it’s sad she chose this over HER family. Shr got scared because me and Leah were hanging out more!!

Sorry I made a mistake in the past with people however we all know what was really going on when shr cheated on her husband. She needs to take some pictures with her kid not mine 24/7. I think theres some guilt issues personally. I see her with my daughter compared to hers and it’s like she’s not even there. I feel bad for her personally.

People can take this how they want. It is the truth…she is an opportunist who puts pictures of my daughter on her Instagram for clicks. I said my piece and I’m at peace with this personally. 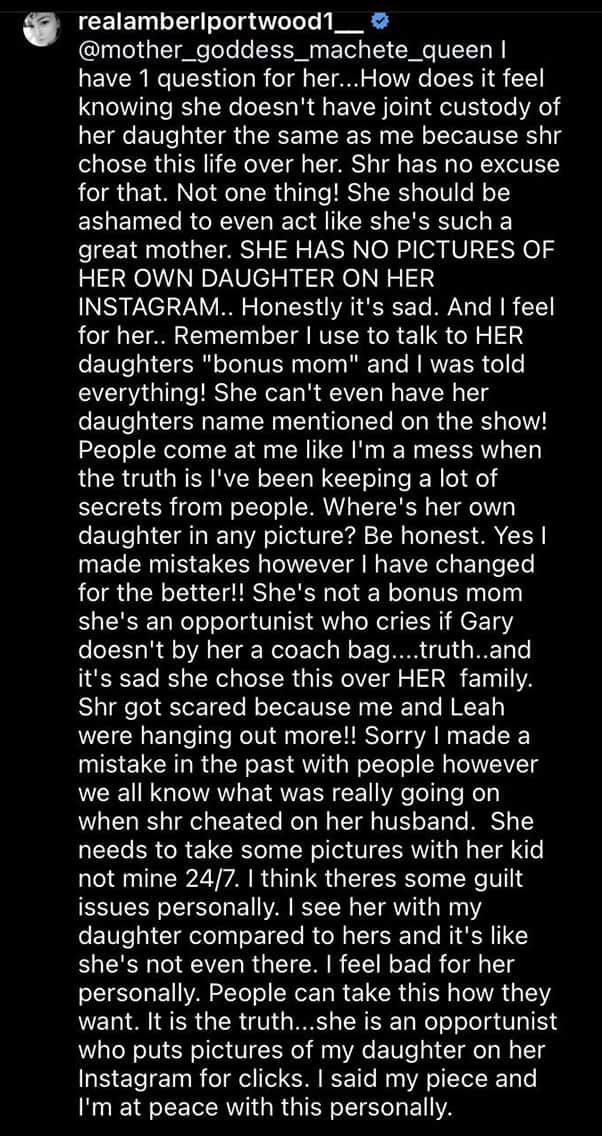 This isn’t the first time Amber has gone after Kristina in regards to Kristina’s custody of her oldest daughter. “[Kristina] broke up her family for money and tv!” Amber tweeted during a previous altercation inspired by a Teen Mom OG preview clip back in January of 2018. “Her husband got a restraining order on her cheating @ss with multiple people and then cheated with Gary! What about her daughter? Straight out of Gary’s mouth!!”

“Make sure to watch Gary and Kristina tonight talking sh!t about me!” Amber wrote in another tweet. “It must be hard making money off of me! Being such a bad mom and all. Where would they be? Wait..in a 1 bedroom shack in the ghetto of Anderson where he was before I got out and the show came back on!! Ignorant!”

Kristina responded to Amber on Twitter with class. “Restraining order to keep my child from filming,” Kristina explained. “I am an active mother to my children so quit hating. I’ve never stepped on your toes as a mother nor will I ever. I care for Leah when she is in our care. Love don’t hate ❤️”

#TeenMomOG Here is a FULL recap of all the Twitter drama that went down between Amber, Gary and Kristina — which was featured in tonight's episode:

After more tweets claiming that Kristina did not have 50/50 custody of her oldest daughter, Kristina posted a photo of the actual custody agreement to prove that she did. So, in summary, Kristina does have 50/50 custody of her oldest daughter, but the child’s father has a restraining order preventing their daughter from being filmed for the show. I do not know if the court order prevents Kristina from posting photos on social media.

As mentioned above, Amber was on Instagram live this week and she was even more spiteful towards Kristina there than she was in her Instagram comment. Amber called Kristina a wh*re, homewrecker and liar repeatedly. Here are some transcripts of more of what Amber said in her stream:

Money was stolen from me when I was in prison. I was told that when I got out I would have my family. All the while I was being cheated on.

I’m not jealous of Kristina. There’s nothing about Kristina that even makes me jealous in any sense. And I don’t try to be mean for that one, I’m just telling the truth.

She respects her because she brings her out to Starbucks, gets her nails done and spends over a thousand something dollars of clothing on her. Hell, I’d respect her too. See, I wasn’t raised that way. I was raised to not spoil my child. Why should this be kept to myself when everything else is just put out there?

Kristina doesn’t do anything for Leah! What does Kristina do?

If you’re wanting to watch Amber’s live stream for yourself, it has been archived by numerous Instagram and TikTok users. Here are a few clips that the transcripts above are from. Be forewarned that there is a bit of foul language: