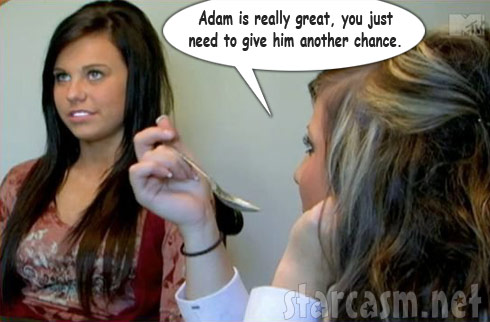 It seems I wasn’t the only one smitten with Chelsea Houska’s cool-headed (in both temperament and hairstyle) roommate Megan Nelson! After feuding with Chelsea’s baby daddy Adam Lind and moving out of the apartment Teen Mom 2 viewers have been flocking to the Sioux Falls hottie’s Facebook fan page to keep up on all things Megan – which as it turns out is quite a lot.

So, I thought I might do a recap on the first season of Megan’s untelevised reality series to get everyone all caught up! 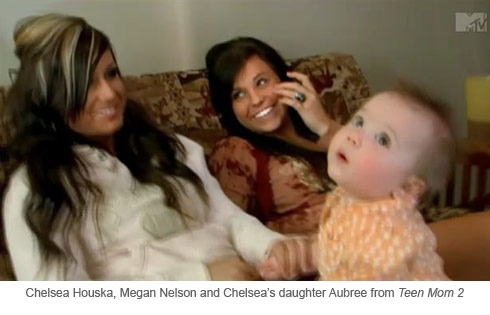 Early reports indicated that Megan and Chelsea’s falling out might be permanent, but the two patched things up in November and have been friends since. Chelsea even went as far as to solicit votes for Megan’s immaculate hair and teeth in the “Top 5 Favorite Inanimate Objects From Teen Mom” poll! (Kudos to Team Megan BTW – Corey’s hat was demolishing the competition but there was a big surge for Megan to make it respectable)

Of course, the biggest news from the former 16 and Pregnant and Teen Mom 2 star is that she is about to become a teen om herself! That’s right, Megan Nelson is 18 and pregnant! But don’t worry, it appears that she will have a much better go of it than Chelsea as far as baby daddy drama goes thanks to her Air Force hunk Cody. Here’s a photo of the couple shared by Megan on Facebook (Do not stare directly into Megan’s teeth without proper eye protection) 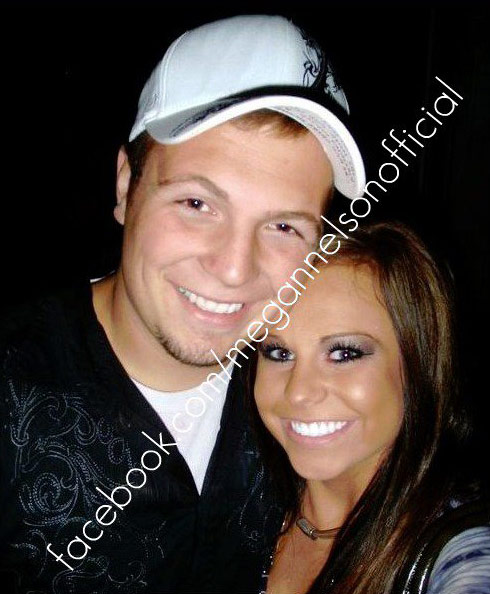 Megan’s pregnancy has been the biggest source of drama so far in Season One, but not for reasons you might think. On February 21 an admin for her fan page posted this exciting news:

Megan is at the doctor’s right now getting her ultrasound done!! She will be posting ultrasound pics and tell everyone boy or girl in a few hrs!!! -Danielle

Then, later that afternoon:

Megan will be posting the ultrasound and announce boy or girl tonight, Sorry for the delay, She needs to tell all her family and Cody’s family before she posts it on here so they don’t find out by reading it online lol 🙂 while we wait everyone can post their guesses boy or girl on this status -Danielle

And later that night:

Megan will announce tomorrow what the baby is. She is still trying to tell family. She feels bad she cant tonight since everyone has been waiting to find out :/ But promises she is going to post pics and tell you all boy or girl tomorrow 🙂 she just doesnt want family to find out over facebook she wants to tell them all herself. Good Night ♥ -Danielle

The delays continued for a few days and needless to say the impatient denizens of the internet got restless. The admin addressed the unrest and linked an image from Megan’s personal page addressing the delay and how upset people were about it:

a few fans have become very rude and demanding to know what the sex of Megan’s Baby is and having a fit that it has been 4 days and she hasn’t told all her family yet. this is megan’s reply. We are asking that everyone BE PATIENT she will let you all know just wants to let family know first -Danielle

MEGAN NELSON @marissa i am gonna tell you guys. its selfish for you to think that i should tell you before my family? of course i appreciate you guys and all but i don’t “know” you. the more sh!t ppl are giving me for not telling them is only driving me away from actually doing it, it gets so annoying. every mother out there probably understands where i am coming from. we want to tell our loved ones first. so if “you” think thats selfish well then… thats a “you” problem. when i’m ready i’ll let you know! 🙂

You go girl! (We’ll take a brief pause from the drama here and check out a couple baby bump photos from Megan) 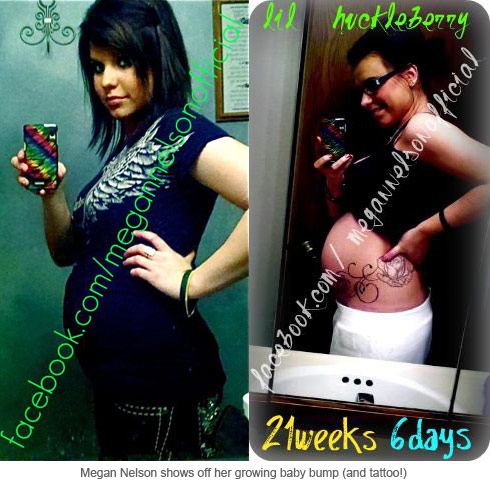 Ah, but the madness continued:

The drama and rudeness seriously has to stop, every time megan or myself come on this page all we see is people fighting. It is ridiculous that people cannot act like civilized human beings. Megan has not said boy or girl yet, people writing asking if its a boy or girl 500x a day won’t make her say it any faster. you get a lot more with being nice then you do with being rude 🙂

In the end the restless natives would claim an unfortunate victory by posting the sex of the baby before Megan made her official announcement. The admin addressed the “leak” on March 1st:

I KNOW SOME FANS OF THIS PAGE ARE FRIENDS WITH MEGAN OR HER FAMILY. ANYONE WHO ALREADY KNOWS THE SEX OF THE BABY PLEASE DONT POST CONGRATS ON HAVING A ? SHE WANTS FANS TO HEAR IT FROM HER 🙂 I AM ONLY POSTING THIS B/C 5 PEOPLE IN THE LAST FEW HRS POSTED WHAT THE BABY WAS ON THIS FAN PAGE. PLEASE DO NOT REPLY TO THIS POST WITH ANY NEGATIVE COMMENTS. IT IS JUST POSTED AS A WAY TO STOP PEOPLE WRITING WHAT IT IS

And here is Megan’s concession with the image she was going to use to make her announcement: 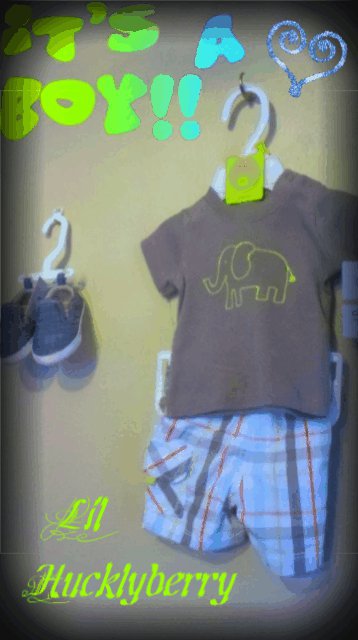 So there you have it, Megan Nelson is expecting a little boy on July 7! Here’s an ultrasound of lil’ Huckleberry (click to enlarge): 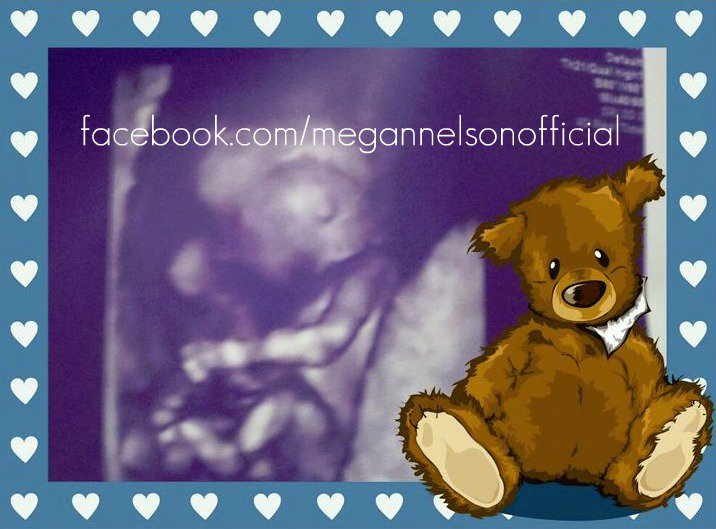 That’s the major news from the Megan front, but here are a few more tidbits that should help answer any other questions you might have:

Megan graduated from high school in May. No word on what her and Cody’s plans are for the future, but I am guessing that since he is in the air force they might be forced to move at some point.

The recent photo (click the link and scroll down) of Megan with purple hair is inaccurate. She posted the following photo yesterday with the caption “pic taken 2 days ago 🙂 just to show everyone hair isn’t purple lol it was just the lighting!” 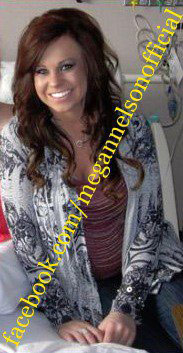 As far as her infamously white teeth, Megan says “i use crest tooth paste… hah i haven’t used whitening strips or anything since my freshman year. my moms teeth are the same lol must get it from her.”

Megan’s fan page is currently running a Megan Nelson look-a-like contest, so if there are any more of you Megantastic young ladies out there hop over to Facebook and submit a photo!

(Are you paying attention MTV? We want more Megan!)

UPDATE – It seems these girls have an awful time with folks creating fake fan profiles on Facebook (and everywhere else) so just in case the links above and the URLs on the photos didn’t clarify, Megan’s ONLY Facebook fan page is http://www.facebook.com/megannelsonofficial. Oh, and Megan and Cody aren’t naming their son Huckleberry, that’s just a prenatal nickname inspired by a Brad Paisley song.