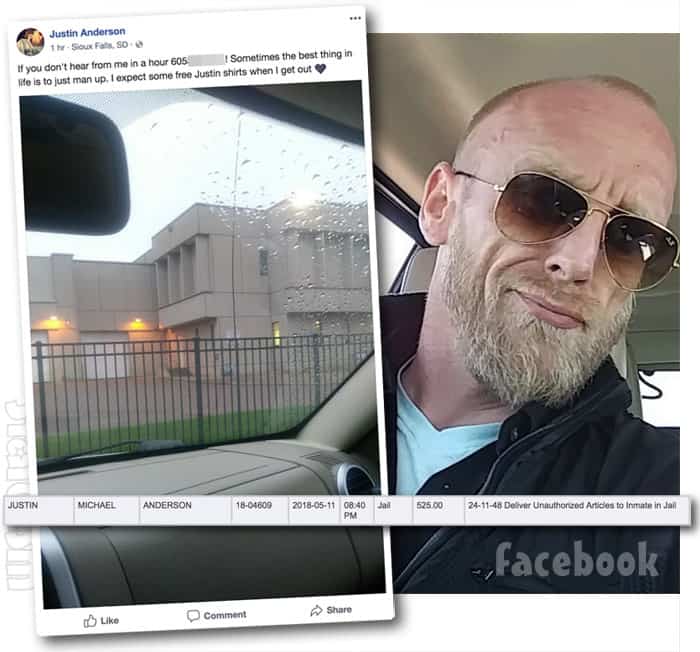 Teen Mom 2 star Adam Lind’s friend Justin Anderson, who has appeared on the show numerous times, is back behind bars in South Dakota tonight after being charged with a felony stemming from an incident involving chewing tobacco.

The story is amazing, and it all played out on Justin’s Facebook page hours before he turned himself in. “Swear I just can’t catch a break,” he wrote hours ago. “Got a 525.00 warrant for having chew in my possession when I went to u.a. back in March. ??” (I am assuming that u.a. means urine analysis because he was on parole.)

The problem is that the urine analysis was at the jail, and Justin was charged with bringing contraband into the jail. “It never left my pocket,” Justin insists. “To top it off, it’s a class 6 felony.”

One of his Facebook friends offered to reach out to a defense lawyer she knows in South Dakota, but Justin points out that he already has a lawyer. He says he tried to call her, but she is currently on maternity leave. “Because I got that super good luck,” Justin jokes.

Justin had to return for another urine analysis Friday night, so he knew he would be arrested then because of the outstanding warrant.

What makes the situation even more heartbreaking for Justin is that he just got off of parole on Wednesday stemming from a 20-year sentence he received after being caught with a pound and a half of marijuana. He reveals that he served 13 years behind bars and another 5 on parole for that conviction.

I confess that I was shocked to hear the severity of the sentence for marijuana possession, and I was not alone. “F**kin weed gets you more time than intentional vehicular manslaughter,” a friend wrote.

“I know,” Justin replied. “I watched hundreds of people that molested kids come in after me and leave before me. That’s the state I call home.” Somehow, Justin remained positive. “It’s alright tho I’m gonna go turn myself in and sit till Monday, get out and keep doing what I been doing. They just keep pushing, I’m gonna keep smiling and keep trying to help my people.”

Case in point, Justin’s friend Adam Lind has managed to stockpile numerous DUIs and he never really spent any substantial time behind bars. Far more people were at serious risk of being harmed by Adam’s actions than what a pound and a half of weed might do, and Justin was sentenced to TWENTY YEARS! (I haven’t been able to verify if that was the only charge, or whether or not Justin had any prior convictions. But still!)

Justin’s last Facebook post was a photo from outside the jail. “If you don’t hear from me in a hour,” he captioned the picture along with a phone number to call. “Sometimes the best thing in life is to just man up. I expect some free Justin shirts when I get out.”

He then shared this image in the comments section with no caption: 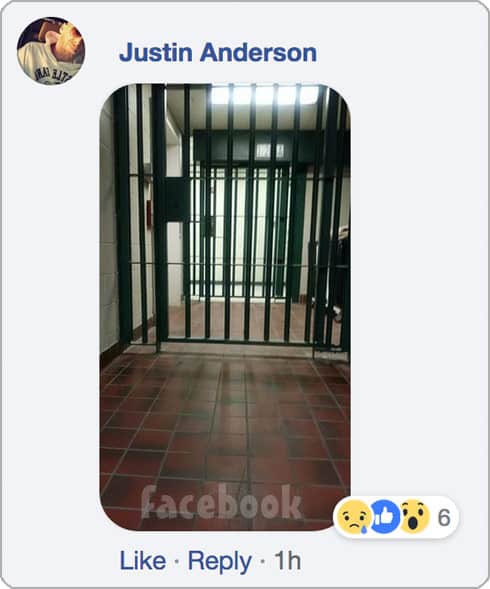 I want to point out that Justin did really seem to be on the right track with getting his sh*t together. He was arrested in January for meth possession, but after his release, he not only appeared to remain sober, but was actively sharing his stories and experiences in hopes that they would help others.

This charge sounds absolutely ridiculous, and I hope Justin is able to get it tossed. And it SUCKS if the process winds up costing him a lot of money. (His bond was set at $525, but as he mentioned, he may just opt not to pay it. There will also be attorney’s fees, and court fees, and who knows what else.)

Justin actually called out Starcasm by name, along with a few other sites, a couple months ago on Facebook for only reporting on him when he gets in trouble. He mentioned all of the positive things he has managed to accomplish recently, and how those are the kinds of things no one wants to report on. I tried to find the post, but after twenty minutes of scrolling through memes in his feed, I had to give up. If you run across it just DM it to us on Twitter or Facebook and I will add it to this post.

Meanwhile, here is another of Justin’s posts that explains why he is always cracking jokes and sharing silly memes, even during bleak times:

Someone asked me why I post the sh*t I do. (The drug related memes) said that it makes people question my sobriety.

Let me school you on something. I post it because I lived it! I post it because it sheds a little light on something people are scared to talk about. I know a lot of people don’t get it because they’ve never lived it. The only thing that’s different from me and an active addict is, one “f**k it” moment and the support system I’ve built.