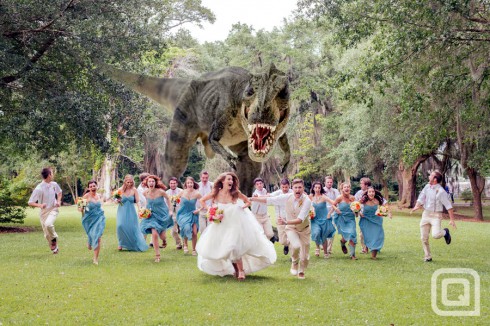 Forget Bridezilla, check out Briderannosaurus Rex! This wedding photo of Louisianna couple James Lowder and Katie Young running for their lives from a massive T Rex dinosaur was taken by their friend, photographer Quinn Miller, and has since gone viral. (Click photo above to enlarge)

Quinn talked with Today about the picture and revealed it was actually inspired by another similar wedding photo he had seen online (perhaps this one?), and also that he had no idea it was becoming so popular until after a friend continued to send him links to various media outlets and blogs talking about it. “Everyone freaked out when it was on the homepage of Reddit, and I have never used that site in my life,” he revealed.

Even more amazing than the amount of time it took for Quinn to find out how popular his photo had become is the amount of time it took for the bride and groom to find out – because they still haven’t! According to Today, “Lowder and Young are currently on their honeymoon without any phone or internet access, so they have no idea that their wedding photo has been splashed all over the internet.” But don’t worry, they probably won’t be too upset about it. “I know for a fact that James would be extremely excited,” Quinn said. “He loves dinosaurs, they’re a fun and laid-back couple.”