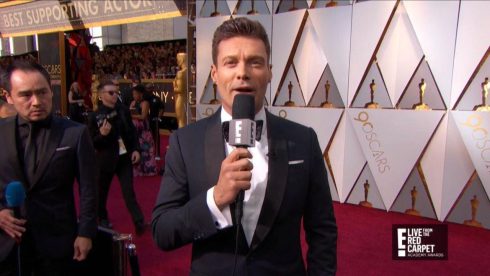 Last month, right before the Oscars, a former employee of Ryan Seacrest spoke out alleging sexual misconduct on the part of the E! host. He went on to interview celebrities on the red carpet at the event and not much of a fuss was made. Several celebrities even spoke out in support of Seacrest. Now his accuser, Suzie Hardy, says she’s brought the matter to the attention of the police — and she refuses to stop talking about her story.

In a guest article for The Hollywood Reporter Suzie Hardy fills in a lot of details about her situation. (For one thing, she wasn’t just Seacrest’ stylist for E!, but for all of his jam-packed schedule of hosting gigs.)

Hardy also laments that after she finally spoke out about Seacrest’s conduct towards her, the minor backlash against him quickly withered away. Seacrest is still the host of American Idol and cohost of Live With Kelly and Ryan with Kelly Ripa, and is still supported by E!.

Furthermore, NBC quietly ghosted an offer to tell her story on their platform. “‘NBC News invited me to tell my story on the Megyn Kelly show, but after the Oscars (and an extensive pre-interview I did with her producers), that invitation disappeared. “We need to reschedule,” they said. I’m still waiting for that.'”

“So much for ‘Let’s believe the women,’ right? Unless you’re the president of the United States or a TV cash cow, apparently. Those who work with Ryan seem to hope I will just go away. Well, I’m not going away. I’m thriving in the truth and feel more inspired than ever,” Hardy goes on. She says she has filed a police report with the LAPD and an investigation is underway. The Hollywood Reporter verified with the LAPD that there is, indeed, a current investigation into Ryan Seacrest.

Hardy also recounted her previous accusation that she was let go in 2012 shortly after she brought Seacrest’s conduct to HR. According to Hardy, Seacrest repeatedly grabbed her crotch and once jumped on top of her in a hotel room while he was sexually aroused. In her Hollywood Reporter article, Hardy reveals the embarrassing power plays and nuances of these situations, alleging that Seacrest loved to humiliate Hardy in front of other people.

“He would say out loud, ‘Look how red Suzie’s face is. Look how embarrassed she is!'” Hardy says. “Then he would laugh, like some next-level corporate tool I didn’t even know existed.”