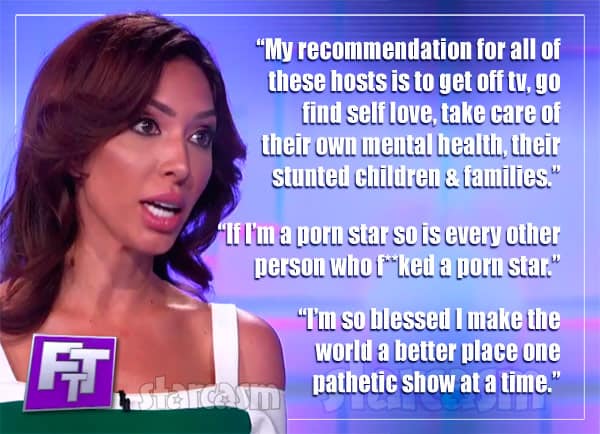 Former Teen Mom OG star will be featured on the brand new syndicated CBS daytime talk show Face the Truth on Monday, and it looks like facing the truth was not a pleasant experience for her! Actually, Farrah seems to suggest that she didn’t face the truth at all, but instead faced a bunch of hate and degradation from the show’s panel of five women co-hosts. Farrah’s daughter Sophia agrees on Instagram, and Farrah agrees with her daughter agreeing with her.

Let me set the stage a bit — almost literally. Face the Truth is a brand new show hosted by Vivica A. Fox and co-hosted by attorney Areva Martin, clinical psychologist Dr. Judy Ho, Judge Mary Chrzanowski (aka Judge “Scary Mary”) and life coach Rosie Mercado. According to the show’s website, Face the Truth “features real people presenting their problems big and small to the hosts in search of solutions. The panel offers their opinion on issues ranging from dating and relationships to bad habits to parenting. Studio and at-home audiences can also weigh in on the conversation and vote on who is right and who is wrong.”

Most Teen Mom OG fans are probably sensing a recipe for fireworks based on the show’s concept, and that looks to be exactly what happened. Farrah’s recent celebrity boxing training didn’t help her much as the five hosts pulled no punches in an aggressive barrage of questions and accusations that included topics ranging from Farrah’s reported drug use, to her parenting skills, to her infamous sex tape, to her relationship with her mom Debra Danielsen.

Here is a preview clip:

In the clip, Farrah states that she is a “damn good mom” before a video clip of Sophia doing the Kiki challenge is played and Rosie Mercado states: “That doesn’t look like that’s a really good mom.”

The preview jumps to the headline-grabbing video of Sophia recording Farrah getting butt injections as Vivica A. Fox asks: “Your daughter needs to be educated about collagen shot in your a**?”

“Babies get shots in their butts every day,” Farrah argues.

Farrah is asked straight up if she did p0rn, and she maintained her denial by stating flatly: “No, I did not.”

Vivica then asks Farrah why she keeps wiping her nose before revealing that Farrah’s mom Debra is concerned that her daughter has a drug problem. This seemed to be the last straw for Farrah as she asks, “What the hell’s going on?” before declaring “OK, good-bye!” and storming off.

Apparently the clip was just the tip of the iceberg because Farrah took to Instagram earlier today to trash the show and the hosts over how she was treated. In the diatribe, Farrah suggested that the hosts have their own mental issues that should be addressed. She then claims the hosts have “stunted children & families” before boasting: “I’m so blessed I make the world a better place one pathetic show at a time.”

When your the only real person on stage & face the truth every day of your life #livingmybestlife some non credible host has 4 other women degrade, hate and act like their credible yet can’t even show respect for them selves … let’s just say crap like this is disgusting probably already canceled & she has to pay her audience and guests heavily to even tolerate this backwards thinking what about women lifting women up? #timesup What about not putting down others to make your self feel better- my recommendation for all of these hosts is to get off tv, go find self love, take care of their own mental health, their stunted children & families & not one women was credible on the show as well I have no respect for women who have to lie, degrade, and be jealous of another amazing women – stop talking about my sex life when you can’t listen to the truth- if I’m a p0rn star so is every other person who f**ked a p0rn star…. oh wait that would be so many sports players etc…but hate on a women? all of their sex lives are a mess-FaceTheTruth By Farrah Abraham with a 2 hour special because I’m the best guest they will ever have. Happy I had my @sophialabraham with me and I got to have her see her grandma- I’ve always put more effort to keep their healthy interactions. When no one else is a single mom on their own like me do not tear down a women you can’t even compete with. Loved seeing how messed up and disgusting our society is and I’m so blessed I make the world a better place one pathetic show at a time. Wearing @betsymoss #truth #tv #farrahabraham #parenting #singlemom

Farrah’s daughter Sophia also posted about Monday’s episode of Face the Truth on Instagram by expressing solidarity with her mom and asking for prayers for the “lieing” and “screwed up” hosts:

My momma’s the best watch her 2 hour special to see how to be the strongest role model as a single mom I’ve ever seen, I’m proud of my mom being the best women on stage no matter a fake audience, lieing hosts… I pray for the hosts and how screwed up they are they should face the truth that their wrong for what they did to my mom… congrats mom for making this show something to talk about I think my mom should have her own talk show ❤️? #facethetruth #paramount #sophiaabraham #farrahabraham 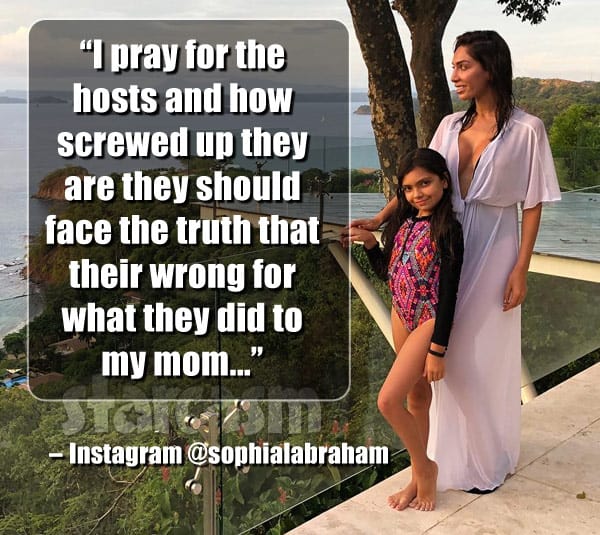 So far, none of the Face the Truth co-hosts have responded to Farrah or Sophia’s rant on social media, but something tells me we will be hearing from Vivica (at least) before the show airs tomorrow!

Meanwhile, it seems that Farrah’s mom Debra Danielsen’s experience wasn’t quite as negative as her daughter’s because she posted a video on Instagram encouraging her followers to tune in to catch up on how she and Farrah are doing these days:

See how things are with Farrah and I on CBS Face The Truth tomorrow! #cbsdaytime #mtv #teenmomog #motherdaughter #difficulttimes

SPOILER ALERT! Farrah and Debra were seen last month enjoying a day at Paramount Studios together, so it seems the burned bridges were repaired for one day at least.

The episode’s description is focused solely on Farrah’s relationship with Debra, and it’s my guess that this was the pitch producers used to get her on the show with Farrah being a bit blindsided by the questions regarding drug use, her sex tape, and other things. That being said, the show is titled Face the Truth, so if you agree to be on it, then you better be prepared to do just that!

Here is the episode teaser from CBS:

Former Sixteen and Pregnant and Teen Mom star Farrah Abraham hasn’t seen or spoken to her mom Debra in nearly a year. Debra believes Farrah has an unhealthy relationship with social media that has led to exploiting her 9-year-old daughter Sophia for her own fame but Farrah thinks her mom is just jealous of her success. Can this mother-daughter relationship be saved or is Farrah cutting Debra out of her life for good?

To see the episode of Face the Truth with Farrah Abraham and Debra Danielsen, you will need to check your local listings. Farrah and Sophia both mention that it is a special two-hour episode, so it could be that it will be aired in two parts. (There is no indication of that on the show’s website however.)

UPDATE – Vivica A. Fox has still yet to respond too Farrah’s comments on social media, but she did talk about Farrah’s appearanceon the show during an appearance on Sway’s Universe last week. Vivica bascially revealed that Farrah tested her nerves and she cited the sex tape and Sophia Instagramming Farrah’s booty injections as examples. Here’s the full interview — the brief segment about Farrah comes in right around the 3:40 mark:

UPDATE – Farrah agreed to take a drug test during the show, and she was NOT happy with the results! Click here to watch the full clip!

Teen Mom OG to replace Farrah Abraham with a Mackenzie, but which one?