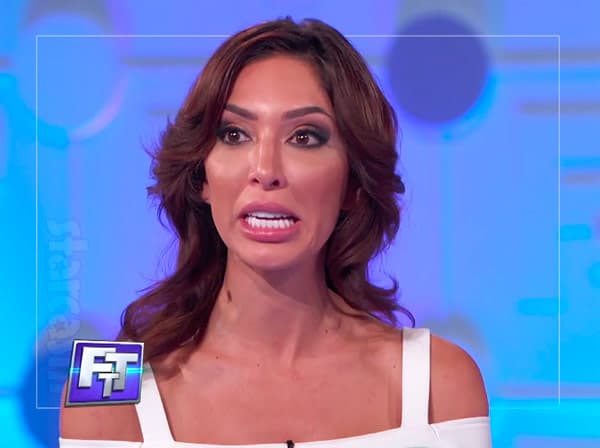 On today’s special double episode of Face the Truth, former Teen Mom OG star Farrah Abraham answered questions about her alleged drug use, and she was put on the spot when Judge Mary Chrzanowski asked her if she was willing to take a drug test. Farrah agreed, but she was not happy with the results!

Here is the clip — my apologies for the autoplay:

Just prior to revealing the results, Judge “Scary Mary” shares a small disclaimer. “I’d like to first say before I give the results that some tests we can take and be very specific about what the drug is — such as cocaine, such as marijuana — and others it’s more of a generalization.” She then continued with the results. “She did test positive for barbiturates, but that could be a prescribed drug. So, if her doctor legally prescribed a barbiturate for her, that’s fine.”

Show host Vivica A. Fox clarified: “She said that, basically, you tested positive, but that could have been the result of you being –” Farrah rolls her eyes in deep thought, before Vivica continues: “Listen, listen — before you go, just listen.”

“Just listen to me baby,” Vivica says calmly. “That could’ve been something that you got from a doctor, that maybe you were prescribed — a muscle relaxer or something like that. But, you did test positive for a barbiturate.”

Farrah asked for clarification on what a barbiturate is, and Dr. Judy Ho obliged: “OK, so Farrah, a barbiturate is a central nervous system depressant. There’s some prescribed medications, so maybe you can show me your list of medications later and we can take a look.”

Farrah refused to accept the results and offered up the theory that the test may have been switched. “So, I don’t think either that’s mine, and I have to just say, did someone confuse something? I have to be that blunt. I have to be that blunt at this moment in my life up here. I’m sorry if it sounds so crazy.” She continued: “Or if someone — I am so laughing out loud right now.” 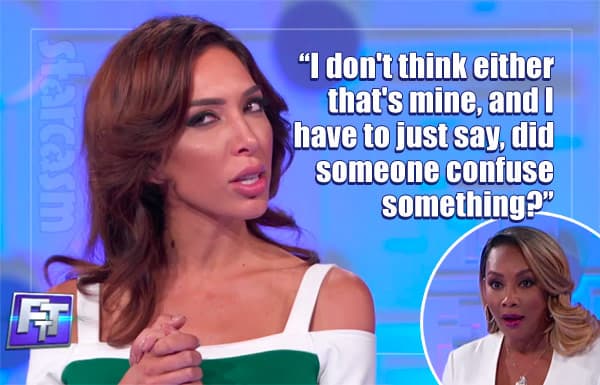 Vivica adopted her sassy tone and responded with a question for Farrah: “Let me tell you ‘LOL,’ did you think that, what, one of us just went and peed in a cup for you and made you just come up with a barbiturate test?”

“No,” Farrah insisted over top of the audience applause, “I’m asking you what the hell’s going on by you saying that if I’m not taking it?”

Dr. Judy Ho then tried to solve the mystery with some questions for Farrah. “Do you take any, like, aids for sleep or anything like that?”

Judge Mary tries to salvage the rest of the show as she threw up a white flag. “Let’s just say it was a false positive and leave it at that, because we’re not gonna win with her.”

That seemed to open another door for Farrah, though. “I actually think that’s screwed up,” she said, “Why would your test do a false positive?”

Farrah went back and forth with the hosts a bit before she called out show producers specifically and added of the drug test: “God only knows if it was, if it’s real.”

That’s where the clip above ends, but on the full episode, the hosts brought out the woman who administered the drug test, and she explained that there was no way the urine sample could have been switched and that she stood behind the test results 100%.

In case you missed it, Farrah was obviously VERY displeased with how things went on Face the Truth, as she lashed out at the hosts with a lengthy Instagram rant over the weekend. In an ironic twist, given that Farrah allowing her daughter Sophia to be on social media was a major topic on the show, Sophia’s Instagram account also shared a post criticizing Face the Truth which read, in part: “I pray for the hosts and how screwed up they are.”

To see more clips from Farrah’s episodes of Face the Truth, you can visit the show’s website. To watch them in their entirety, you will need to check your local listings for air times.