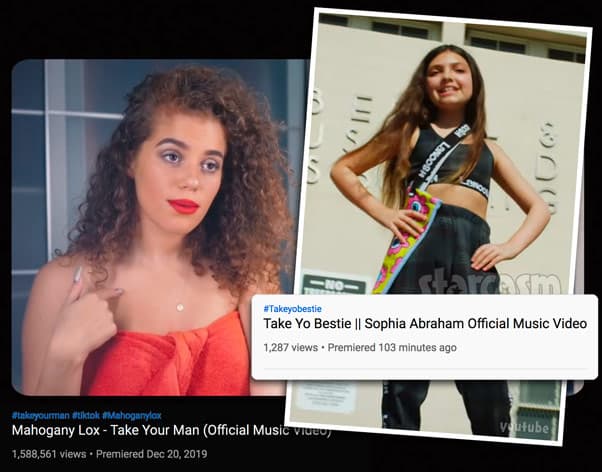 I’m sure I don’t have to tell you that international pop sensation Sophia Abraham has just dropped her second single. Following on the heels of her smash hit “Bestie Best Friends,” Sophia is continuing to offer up her expansive knowledge of close friendships with her latest single, “Take Yo Bestie.”

In the new song, Sophia points out that none of our best friends are safe, and she can steal any of them she wants with her unlimited fast food spending allowance. However, it may be that besties aren’t the only thing Sophia can take because her song seems VERY similar to Mahogany Lox’s single “Take Your Man” released in December.

Former Teen Mom OG star Farrah Abraham joined her daughter for a live launch across all 732 of their social media platforms earlier today. The mother/daughter duo excitedly counted down the second in their California apartment. “Oh my god! I do this every premiere!” Farrah said during the live stream, just 30 seconds before the music video dropped. “I’m such a mom!” she continued. “I love Sophia!”

For comparison, here is Mahogany Lox’s “Take Your Man,” which was released in December and currently has more than 1.5 million views on YouTube

Some lyrical excerpts from both songs:

…Why play tag when you know I’m it
You already lost, should’ve known to quit
Life’s a game and you’re taking L’s
Your man don’t even like the way your c**chie smells

The similarities between the songs were first noticed weeks ago, and numerous people messaged Mahogany Lox about it. So far she has yet to issue any sort of public statement. It’s important to note that she could be fully aware of the similarities and may have worked out a deal with Farrah in regards to usage. That is unclear.

UPDATE – Farrah reportedly stated during an Instagram Live session after this post was published that the song is a parody of the Mahogany Lox song. The live video was not saved or re-posted, so I have been unable to verify that Farrah said that. I heard this from multiple sources, so I though tI would go ahead and provide this update. If I get confirmation, I will add Farrah’s exact quote.

On a side note, the Mahogany Lox music video is hilarious! It was a bit of genius to use the notion of taking someone’s man and interpret that to mean physically taking him! I can understand why Sophia didn’t use the same concept, though. Kidnapping an actual kid might not go over too well.

To help promote the release of “Take Yo Bestie,” Farrah and Sophia are running a contest for social media videos tagging #TakeYoBestie that will award prizes to the videos with the most views. Here are the unedited rules for the contest shared by Farrah earlier this week. (She also mentions an opportunity to receive $20 to make a video featuring the song, but it appears that the RSVP date has passed on that opportunity.)

CREATOR PAYOUTS! MAY 15 music opportunity! HEY! I’m getting interest on who can create a fun engaging video to kick off Sophia Abraham song premiere “TAKE YO BESTIE” MAY 15th! Let me know if your compelled to do a TikTok or triller video and can tag are accounts.

Triller is putting in their system for the big day & should be in TikTok before hand as well! If you want to grab a listen 👂 ask “ALEXA “PLAY TAKE YO BESTIE BY SOPHIA ABRAHAM” for a listen.

Creators will get $20 for a 15 sec video including to Venmo (hashtag #Bff #TakeYoBestie @FarrahAndSophia Join the challenge & win Prizes until May 25! Roblox Gift Cards, BFF DOLL & $100 for the top 5 highest viewed videos by May 25) it does not have to be 60 seconds only 15 sec & can include other tags! If you post on your Instagram let me know as we look for all platforms with highest views for chance to win $100 & you can win on posting more then 1 video like last video challenge! RSVP BY MAY 13 Wednesday!

The contest is nearly identical to the one that Farrah and Sophia had for the release of her first single, “Bestie Best Friend.” The previous contest results raised a few eyebrows when at least four of the top five were people that Sophia was photographed or videoed with earlier. Here is the announcement of the winners by Sophia, which actually only includes four winners — all of which posed for photos and/or videos with Sophia previously:

THANK YOU TO ALL THE 625 videos featuring #bestiebestfriend & over 496,000 views ! ❤️ you all & you all are featured in this video! So proud of my first single & look out May 15 2020 My next music video is coming your way! #tiktok #rewards #foryou #sophiaabraham #

In defense of Farrah and Sophia, all of the winners that Sophia previously interacted with were influencers, so it would make sense that they would get the most views for their #BestieBestFriend videos.

As Sophia looks to expand her global musical empire, I thought I might provide some song suggestions. Here are a list of bestie-themed song ideas inspired by other songs you might recognize: