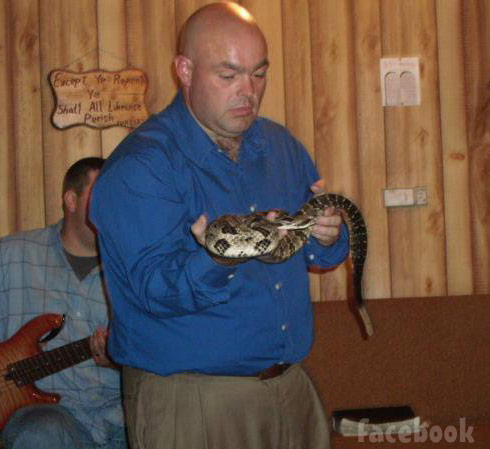 Snake handling preacher, and star of National Geographic Channel’s reality series Snake Salvation, Pastor Jamie Coots has died after being bitten by a snake over the weekend. Coots, 42, reportedly suffered the snake bite Saturday night during a service at his church, Full Gospel Tabernacle in Jesus Name in Middlesboro, Kentucky. He died later that night in his home after refusing medical treatment.

* The audio you hear is from an embedded Snake Salvation video clip below featuring Pastor Jamie Coots and his son Cody. I really wanted to include it in the post, but unfortunately I couldn’t figure out the coding to shut off the default autoplay setting. You can scroll down and pause the clip.

According to Middlesboro Police Chief Jeff Sharpe, paramedics were called to the church at approximately 8:30PM Saturday night after receiving a call that someone had been bitten by a snake, but Jamie Coots had already left and returned home. Paramedics then went to Coots’ home nearby and saw that he had been bitten on the right hand. They advised Coots of the potential health risks if he refused medical treatment for the bite, but Pastor Coots could not be swayed.

The medical responders left Coots’ home at approximately 9:10PM. According to police, authorities were notified less than an hour later that Coots had died. He was later pronounced dead at his home. 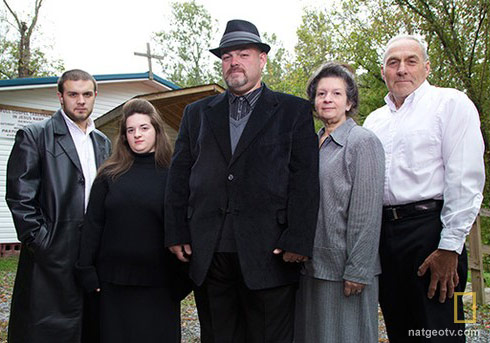 UPDATE – Click here for Pastor Jamie Coots’ obituary and funeral details as well as information on where to send donations to help out his family.

Viewers of Snake Salvation know that Pastor Jamie Coots, a third generation snake handler, is no stranger to being bitten. He was bitten twice by rattlesnakes in the 1990s, with the latter bite resulting in the loss of his middle finger. (He keeps the dead finger in a jar and shared it on the show.) During the first season of Snake Salvation there were three separate snake bite incidents, including Jamie’s father getting bit by a copperhead during a service and his son, Little Cody, getting bit by a cottonmouth while gathering snakes in the swamps of Louisiana.

It is still not clear what kind of snake fatally bit Pastor Jamie Coots, but it is assumed to be a rattlesnake, the most dangerous of the venomous snakes handled in most US snake handling churches. (You can find out a little more about the different kinds of snakes and their toxicity here.)

Pastor Jamie Coots turned 42 in November. He shared this grateful message on Facebook the year prior:

Thanking everyone for the birthday wishes. God has been so good to me. He has blessed me with 41 wonderful years, a wife who loves me unconditionally, two wonderful children, a daughter-in-law that loves and takes care of my son the way his mom takes care of me, a very beautiful grand daughter, I still have my dad with me who is such an inspiration, and a great host of church family and friends. What a blessed birthday thank you Jesus for your blessings on me. 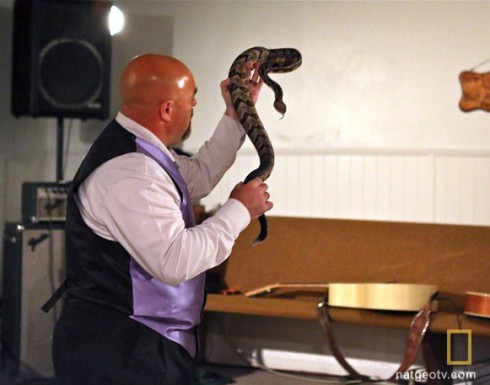 I am personally a huge fan of the show, and it saddens me greatly to hear that Pastor Jamie Coots has died. Despite his controversial (and dangerous) beliefs, he was obviously a very loving father and husband — not to mention a charismatic pastor who took his Christian beliefs very seriously in a way that was open and loving to those who disagreed with him.

Here is a clip in which Jamie and his rather impatient and judgmental son Cody go hunting for snakes and Jamie tries to pass on a little wisdom about patience and compassion:

We have reached out to National Geographic Channel and will update if they issue a statement about Jamie’s passing.

UPDATE – National Geographic shared the photo below on instagram and Twitter as well as the following statement:

National Geographic joins his family, friends and community in mourning the loss of Pastor Jamie Coots. In following Pastor Coots for our series Snake Salvation, we were constantly struck by his devout religious convictions despite the health and legal peril he often faced. Those risks were always worth it to him and his congregants as a means to demonstrate their unwavering faith. We were honored to be allowed such unique access to Pastor Jamie and his congregation during the course of our show, and give context to his method of worship. Our thoughts are with his family at this difficult time. #RIP