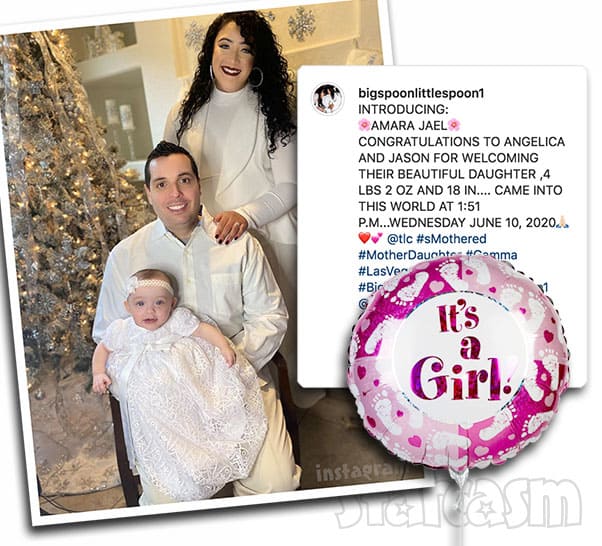 Congratulations to sMothered couple Angelica Michaux and Jason Ihle as they are now the proud parents of a little baby girl!

Angelica revealed her pregnancy during the sMothered Season 3 premiere episode that first aired on May 31. It seems that the episode was filmed a long, long time ago because Angelica gave birth in July of last year!

The 33-year-old reality star broke the news on Instagram on July 27. “Becoming a mother is by far my greatest accomplishment in this life,” Angelica captioned a gallery with two photos and a brief video holding her newborn. “We are so blessed 🌸Amara Jael🌸 is healthy & at home with us.”

Angelica concluded by writing: “Thank you to everyone who has reached out 💕Stay blessed, y’all ✝️.”

More details about Amara’s birth were revealed on the joint Instagram account that Angelica shares with her mother, Sunhe:

INTRODUCING: 🌸AMARA JAEL🌸 CONGRATULATIONS TO ANGELICA AND JASON FOR WELCOMING THEIR BEAUTIFUL DAUGHTER ,4 LBS 2 OZ AND 18 IN…. CAME INTO THIS WORLD AT 1:51 P.M…WEDNESDAY JUNE 10, 2020🙏🏻❤️💕

Here are the announcement galleries:

Angelica has shared numerous photos of Amara on Instagram since her announcement, so I strongly encourage those of you with a high tolerance for adorableness to check out Angelica’s feed and/or the mother/daughter @bigspoonlittlespoon1 account!

Here are some of Angelica’s update messages with a few of the galleries included:

AUGUST 1, 2020 – My beautiful baby, 🌸Amara🌸 You are so loved & so cherished 🎀 I will prove this to you every second of your precious life 🍼 Mommie loves you!!! ♥️ #MotherDaughter #MyBeautifulBabyGirl #Parenthood #Blessed #Newborn @tlc

AUGUST 28 – When I look into your eyes, I see all that I am & all that I want to be 💫 And what I want to be is the best Mommie for YOU♥️ We love you 🌸Amara Jael🌸 #MyBaby #ShesAdored #WeAreBlessed #NoGreaterGift #NewParentLife @tlc #Gerberphotosearch2021 #AnythingForBaby

SEPTEMBER 25 – 🌸Happy National Daughter’s Day🌸 to this little beauty here 🤍 You have enriched my life more than I could have ever dreamed. When I first laid eyes on you, you already had me wrapped around your baby pinky toe 🎀 I can’t wait to watch you grow but for now, stay tiny my precious angel 👼 My heart is yours 🍼💖🙏🏽 #sMothered #MyBaby #IAdoreYou #MyPreciousBabyGirl #MommieLovesYou @tlc @gerber @therealcutekid @disneybaby #bidiboocontest #littlemissbeauty #Gerberphotosearch2021 #AnythingForBaby

JANUARY 1 – 2020 was not kind to many, but we were extremely blessed & you have to count your blessings when you can 🙏🏽 I got engaged & had a beautiful baby with the man I’m going to marry 👰🏻💍🤵🏻 Nothing could have made 2020 better than those two life changing moments & I couldn’t be happier 🤰🏻May 2021 bless everyone with good health, happiness & love ✨P.S. All photography credit goes to my mama because without her, these photos would NOT have been the bomb.com 📸🥰 I love you, Mommie 🤍🤍🤍 #HappyNewYear #2021 🎆 #TheRealCuteKid #DisneyBaby #sMothered #TLC @tlc @tlcmenow #littlemissbeauty #bidiboocontest #Gerber #babymodels #kidscasting #igbabies @therealcutekid @gerber @disneybaby @nickelodeon @kidscasting_official @mixedbabiesig @mixedracedchildren @beautifulmixedkids @prettymixedkids #BeautifulMixedKids #MixedRaceChildren #PrettyMixedKids #Gerberphotosearch2021 #AnythingForBaby

Congratulations again to Angelica, Jason — and Sunhe. 😉 Now that we have all the details on the baby, what about her parents?

DID ANGELICA AND JASON GET MARRIED?

Given that the current season of sMothered was filmed well over a year ago, then it seems like that chances of Angelica and Jason getting married in that time are pretty good, right?

As of October 8, Angelica was still talking about the wedding being in the future when she shared an Instagram post paying tribute to Jason:

I wasn’t planning on any kind of relationship when I moved to #LasVegas 🎰 Then I met you💘 We started out as friends then you & I just kind of happened 👩‍❤️‍💋‍👨 I’m so glad I FINALLY said “yes” after you asked me out for the Nth time😝 We have a beautiful baby girl 🎀 And now we’re getting married👰🏻🤵🏻Our time together never seems to be long enough because I always want to be with you 😚And now we will be💍 I love you, Jason💋♥️💋 #LetsStartWithForever @tlc

However, I found one photo from November in which it appears that Jason is wearing a ring on his left ring finger: 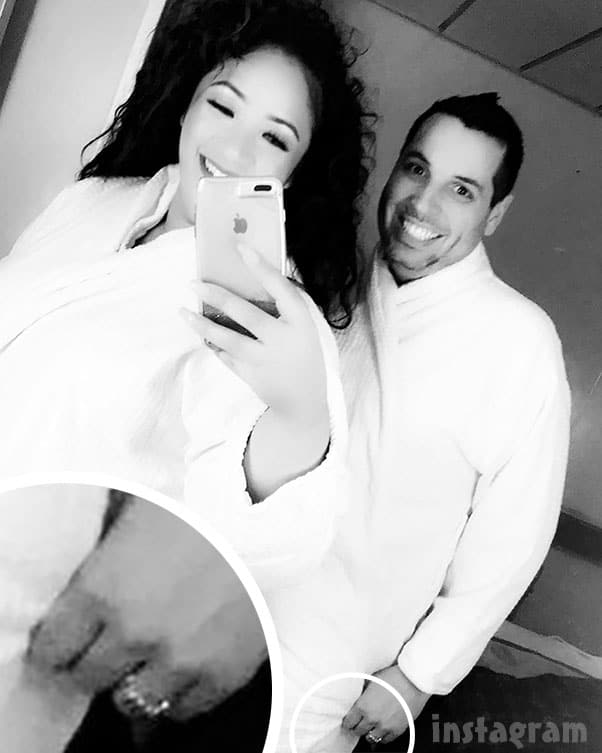 Lastly, I checked court records for the county that Las Vegas is in and the result was… no marriage license or certificate for Angelica and Jason. That doesn’t mean they aren’t married, just that they didn’t legally get married in Clark County, Nevada. (Reality show fans may be aware that fellow reality star and fellow Clark county resident Colt Johnson from 90 Day Fiance managed to hide his recent marriage by eloping to nearby Reno.)

The end result is that it appears as though Angelica and Jason are not married. That being said, the current season of sMothered was filmed before COVID-19, so there is still a chance that viewers might see a shotgun elopement or destination wedding. Be sure to tune in for new episodes of sMothered airing Monday nights at 9/8c on TLC to find out!

If you need to get caught up on all the mother/daughter duos featured this season, be sure to check out our sMothered season 3 cast profiles post with names, photos and bios fer everybody!

Ashlee Simpson and Evan Ross are expecting their first baby together