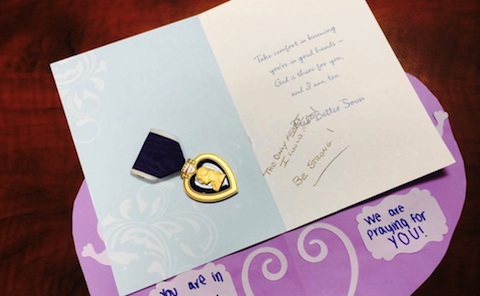 A twelve-year-old girl who was stabbed nineteen times in the “Slender Man” case has gotten a gift she likely didn’t expect, and will certainly never forget.

Thanks to the Hearts For Healing Facebook page her family set up, the girl has had thousands of handmade hearts delivered to her Wisconsin hospital bed.

Last month, she received a card with a genuine Purple Heart inside: the medal awarded to U.S. combat veterans who’ve been wounded in service.

The medal was sent anonymously. The handwritten text inside the card said, simply, “The only heart I could find–Be strong!”

John Scocos, the Wisconsin Secretary of Veterans Affairs, was unsurprised that a veteran would send his medal, saying,

American service men and women are also moms and dads, uncles and aunts – brothers and sisters. It does not surprise me that a decorated veteran unselfishly gave this amazingly brave and courageous little girl something from his or her heart.

On May 31st, the girl was attacked by two friends who stabbed her because they wanted to become “proxies” of the Slender Man. (Though long-debunked, Slender Man is an internet meme that continues to inspire urban legends.)

She was able to crawl out of the woods where she’d been playing hide-and-seek, where a passerby noticed her and found help.

Her attackers have been charged with attempted homicide.

Eric Knudsen, the creator of the Slender Man image, said after the attack he was “deeply saddened by the tragedy in Wisconsin and my heart goes out to the families of those affected by this terrible act.”