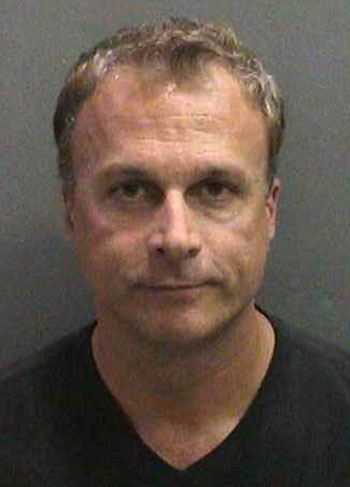 The incident took place at the couple’s Ladera Ranch home where Simon was taking care of their dog. Tamra arrived at the house and the couple’s ten-year-old son Spencer opened the door to let her in. Upon entering the home, Simon allegedly threw a plastic retractable leash at her.

Radar Online reports that the incident was over the custody battle involving Simon and Tamra’s dog, but then later they say, “Simon was upset with Tamra because she planned a birthday party for one of their children at her new house. Even though she invited Simon, he was angry and felt the party should have been held at a ‘neutral’ location.”

Jim Amormino, spokesman for the Orange County Sheriff’s Department, said about Tamra and the leash-tossing, “She said it was going toward her head. She threw her hands up to protect herself.” The leash reportedly hit her on the wrist.

At 8:49 deputies were called to Ash Hollow Trail just after the incident occurred but Simon had already left.

An emergency protective order was issued and Simon Barney was taken into custody at 12:30am Tuesday morning and was being held held on $10,000 bail. He was released on bail from the Orange County Jail at 3:29pm and is scheduled to appear in court on Wednesday.

The volatile couple’s marriage fell apart last year while Bravo was filming The Real Housewives of Orange County and much of the drama played out on the show. The same promises to be true next season because the show is currently being filmed and most certainly the incident and Simon’s arrest will play a major part in Tamra’s story line, as will her relationship with new boyfriend Eddie Judge.

Here is the information on Simon Barney, 46, from the Orange County Sheriff’s Department web site: