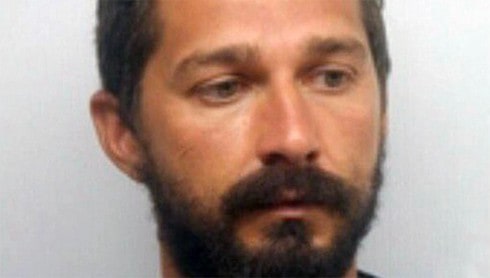 31-year-old actor Shia LaBeouf, who has had many run-ins with the law over alcohol related incidents and attended rehab for alcohol last year, has yet again been arrested for public drunkenness in Tybee Island, near Savannah, Georgia. He’s been staying in Savannah to shoot a film, The Peanut Butter Falcon, and early Saturday morning his partying got out of hand. Along with public drunkenness, he’s charged with obstruction and disorderly conduct.

He was taken into custody around 4 a.m., and released sometime during the day on a $7,000 bond, according the Chatham County Sheriff’s Office. The incident started when he asked someone for a cigarette and became belligerent when the person didn’t give him one. Police approached him and asked him to leave, which he refused to do.

“When the officer attempted to place LaBeouf under arrest, LaBeouf ran to a nearby hotel,” the police records state. “LaBeouf was arrested in the hotel lobby, where his disorderly behavior continued.”

LaBeouf was arrested in 2014 for getting drunken and rowdy at a Broadway performance. In 2015 he was arrested for public intoxication in Austin, TX, and last year he went to rehab for his substance abuse issues. He’s previously opened up about how his difficult childhood influences his self-medication and outbursts, and how alcohol makes him feel “smaller than I am, and I get louder than I should. It’s just not for me, dude.” He attended rehab last year, but relapses are very common with substance abuse.