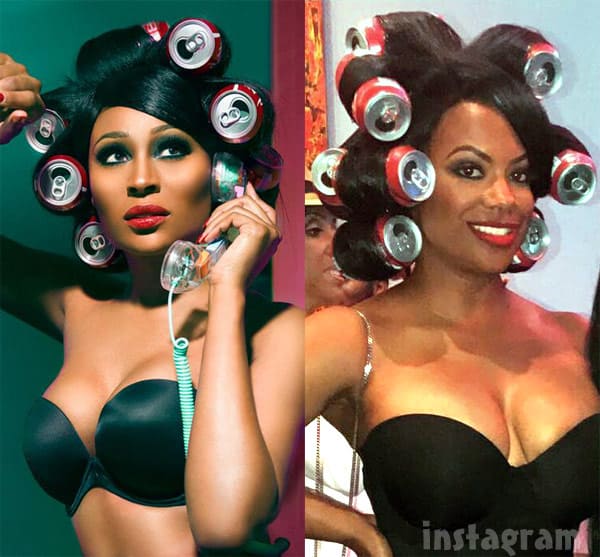 Kandi shared a number of photos from Cynthiapalooza, including these side-by-side images of herself and Cynthia’s aluminum cantastic modeling pose:

“Tonight was the #50Cynt challenge!” Kandi captioned the pictures on Instagram. “We all were suppose to dress up as different versions of @cynthiabailey10,” she explained. Kandi then thanked her talented team for the look: “Thanks @carmoncambrice for coming up with the idea to do the coke Can wig pic of Cynthia! Thanks @latashawright for that mean Smokey eye & red lip! @gochasalon you killed that coke can wig!!!! What do y’all think?! Did I pull it off???”

Ummm… YES! Yes, you did Kandi! And apparently I wasn’t the only one who thinks so because Kandi took home the trophy for the best Cynthia Bailey homage: 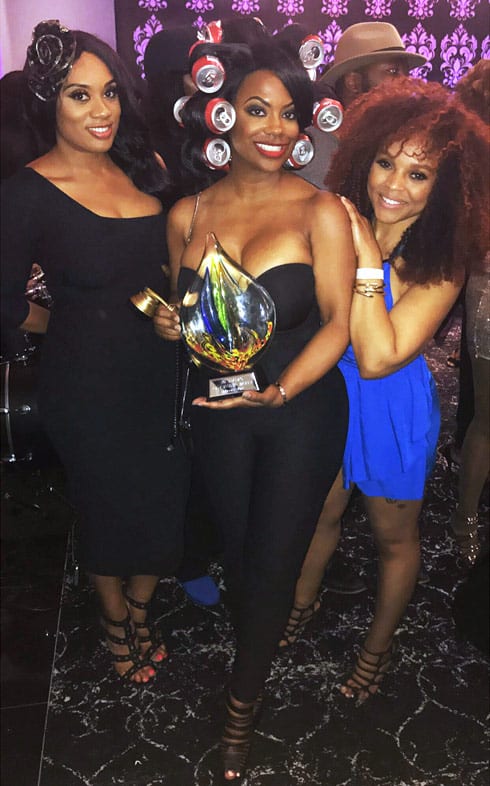 “We won!!!” Kandi proudly proclaimed in the caption to the photo above, along with another with her look creators — both of whom she thanked once again. “My girls @carmoncambrice & @gochasalon pulled together my look for the @cynthiabailey10 party. #WinningTeam #WeGotTheTrophy”

I did a little research, and it appears as though Cynthia’s soda can roller look was also an homage to a supermodel — Naomi Campbell! (I tried to track down the origin of the Cynthia photo, but had no luck. It looks to be recent, though. I didn’t miss that shoot on an episode of the show did I?!) Here are side-by-side photos of Naomi and Cynthia for comparison: 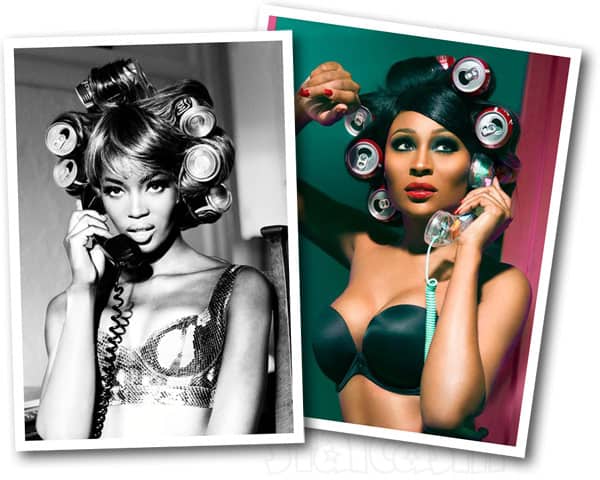 I think the phone makes it a little more than coincidence — and also probably helped inspire Lady Gaga’s recreation for the “Telephone” music video.

Ah, but Kandi wasn’t the only RHOA cast member channeling her inner Cynthia Bailey at the event! Check out blonde Sheree Whitfield:

And here are lots more pictures — including Kenya Moore, NeNe Leakes, Porsha Williams and Cynthia herself!

The Ladies Come Together And Dress Like Cynthia For Her 50th Birthday ?? (Yes Her Birthday Was In February) This Is The First All Cast Filming Event Featuring NeNe Leakes, Kandi Burruss, Sheree Whitfield, Porsha Williams & Shamea Morton. This Will Most Likely Be The Opening Episode For Season 10 ?? #50Cynt #RHOA #RHOA10 #CynthiaBailey #NeNeLeakes #KandiBurruss #PorshaWilliams #KenyaMoore #ShereeWhitfield #ShameaMorton #50ShadesOfCynthia

A post shared by The Real Housewives Of Atlanta (@realhousewivesatlanta) on Jul 7, 2017 at 9:50am PDT

#NeneLeakes and #MichelleBrown came to SLAY at #CynthiaBailey's party tonight! Cameras are in the building! ?? #RHOA

A post shared by The Real Housewives of Atlanta (@therealhousewivesofatlanta) on Jul 6, 2017 at 7:02pm PDT

Our source says there was major DRAMA between a few of the ladies during filming last night! Nene ain't with the shits! ?☕️ #RHOA

A post shared by The Real Housewives of Atlanta (@therealhousewivesofatlanta) on Jul 7, 2017 at 3:49am PDT

#KandiBurruss went ALL OUT for #CynthiaBailey's 50th birthday party the other night and I'm here for it! ??? #RHOA via: @GochaSalon

A post shared by The Real Housewives of Atlanta (@therealhousewivesofatlanta) on Jul 8, 2017 at 5:59am PDT

Yaaaas miss @cynthiabailey10 I did that!!! Birthday party guests were asked to come as Miss #50cynt…I think I nailed it with this short little wiggy from her modeling days and 1st season of #RHOA #50shadesofcynthia #kenyamoore @bravotv #cynthiabailey10 #womenwhoslay

Charrisse Jackson-Jordan From The Real Housewives Of Potomac Is Making Her Rounds In Atlanta! One of the stars of the Real Housewives Of Potomac has been down in Atlanta, Georgia making her rounds on the socialite circuit and it is none other than Charraise Jackson-Jordan! As you can see from the video we shared Charrise was at Cynthia Bailey of the Real Housewives Of Atlanta birthday party (yes Cynthia's birthday is the 19th of February but we are told that the producers gave her a summer birthday party for the show, maybe the reason for the party will change by time the episode is shown in season 10), the party had a theme of 'The 50 Cynt Challenge' (Cynthia is now using #50Cynt on social media since she turned 50 in February). The guests dressed giving their best Cynthia impersonations by dressing like Cynthia (Kandi Burruss won the trophy with her impersonation of Cynthia's Coke can hair roller set from a photoshoot she did a few years ago). Charrisse was also at an All Black Party that several of the women from the reality show Married To Medicine attended (hopefully that party was filmed for their show) and of course Charrisse got her shopping on at Nene Leakes and Bow Wow's mother Teresa Caldwell's SWAGG Boutique (we all know that Charrisse loves to spend money). You go Charrisse!

#RHOA's #KandiBurruss celebrated #CynthiaBailey's 50th birthday with this fashionable hairstyle. Guests were asked to dress up as different versions of Cynthia. This coke can wig was done by @gochasalon ? (#50cynt ? Seven Seven)

I’m a sucker for a Real Housewives costume party — and one where they all dress up as one of the cast members sounds even awesomer! I CANNOT WAIT to see all the surreal drama between Cynthia, Cynthia, and Cynthia. 🙂

Also, I’d like to wish Cynthia a HAPPY 50th BIRTHDAY! As a tribute, here’s Bruce Springsteen doing a song that he just HAD to write for you: