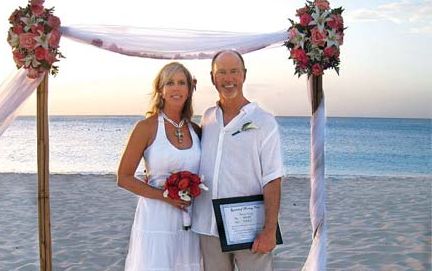 So much for renewing their vows! Real Housewives of Orange County‘s Vicki Gunvalson filed for dissolution of marriage from husband Donn Gunvalson Monday in Orange County Superior Court, according to documents obtained by TMZ.

The split may come as a bit of a shock to fans of the show (like this one!) who watched the couple renew their vows in an emotional scene that aired last season. The couple talked about “refilling their love tanks” and appeared to have done just that as they exchanged rings and new vows in Turks and Caicos. Vicki talked about the ceremony:

Donn and I renewed our vows after 15 years of marriage because we almost got divorced last year. When we decided to stay together, we felt we needed to restart on a clean slate. So I surprised Donn with a renewal ceremony in Turks and Caicos, barefoot on the beach. I think that it wouldn’t have been as special if he knew beforehand. 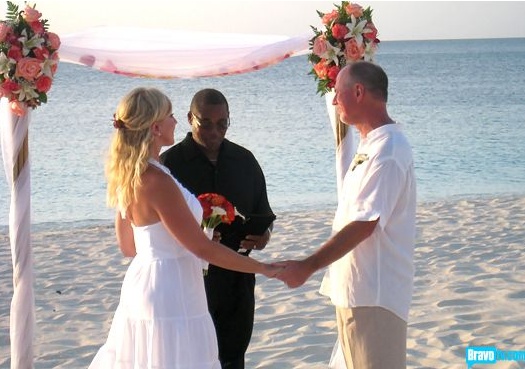 Vicki Gunvalson and husband Donn Gunvalson renew their vows in 2009

Victoria “Vicki” Gunvalson is a successful independent insurance agent and has been on the show since the beginning. Donn Gunvalson, a construction supply executive, is her second husband. Vicki married Donn in 1994 and she has two children, son Michael and daughter Briana Wolfsmith, from a previous marriage.

UPDATE – CLICK HERE TO READ VICKI AND HER SON MICHAEL’S RESPONSES TO THE DIVORCE ANNOUNCEMENT!

First we had Tamra Barney’s ex Simon Barney get arrested after throwing a plastic dog leash at her and now Vicki and Donn are getting divorced. I can’t believe I’m saying this, but this season could be more emotional and feature more dramatic life implosions than last season’s train wreck bonanza!