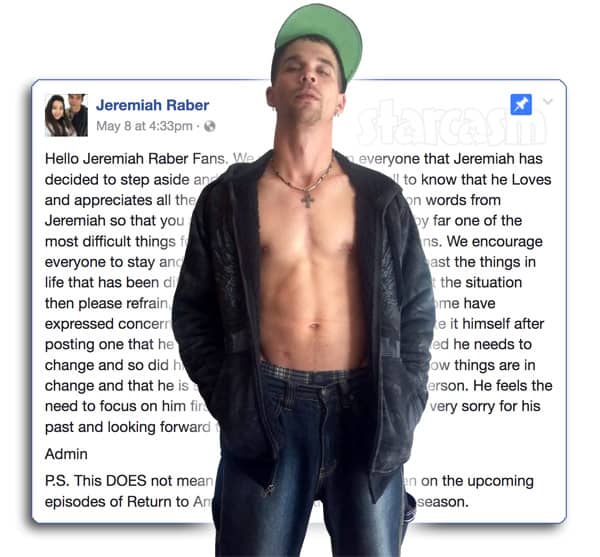 It’s been a little over two weeks since Return To Amish star Jeremiah Raber was arrested and charged with domestic violence after an altercation with his wife Carmela at their home in Florida. Carmela told police that Jeremiah “strikes her on a daily basis,” and the officer on the scene observed “several large bruises on [Carmela’s] legs and arms that were caused from [Jeremiah] striking her with a closed fist.”

After his arrest, Jeremiah posted a lengthy statement explaining that he had a difficult childhood which has caused him to look for approval from others instead of love. “We have had so much hurt and struggles in our marriage because I myself growing up had never experienced what real love was and because of that even tho I was married I kept looking to people on my Facebook for approval of everything that I did,” Jeremiah wrote. “That has ruined my relationship and marriage with my true love.” (Jeremiah references his first failed marriage as well, which also had allegations of abuse.)

Jeremiah later revealed that he is getting counseling and he posted an apology on Facebook. “In the future, I have every intention of curbing my thoughtless actions and learn to adjust my behavior befitting the environment and situation,” he wrote. “I’m going to go thru personal counseling to better me and the marriage.”

Jeremiah concluded his apology by looking forward instead of backward with a rather bold sense of optimism. “Again, I am sorry for my actions and I hope that we can put this matter behind us. I look forward to be an inspiration to others dealing with the same issues.” 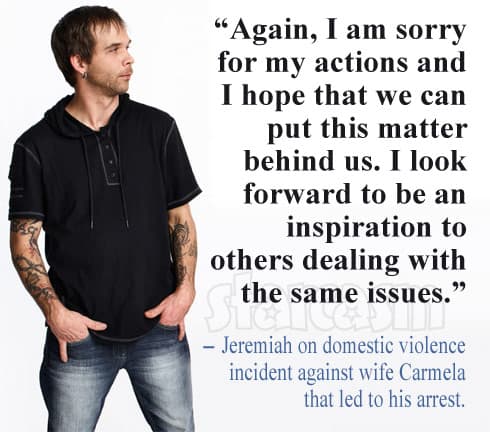 In what I assume is a result of Jeremiah getting counseling combined with his admission that he is obsessed with getting approval on Facebook, the reality star is stepping away from social media. An admin on his Facebook fan page posted the following announcement on Monday:

Hello Jeremiah Raber Fans. We want to inform everyone that Jeremiah has decided to step aside and focus on him. He wants all to know that he Loves and appreciates all the support. At times we will pass on words from Jeremiah so that you all know what is going on. This is by far one of the most difficult things for him to do is not be here for his fans. We encourage everyone to stay and show him support he needs to get past the things in life that has been difficult. If you need to be negative about the situation then please refrain, He has posted a public apology that some have expressed concern on who actually wrote it. Jeremiah wrote it himself after posting one that he would normally say in his words decided he needs to change and so did his comment. This goes to show just how things are in change and that he is striving to become a much better person. He feels the need to focus on him first and foremost so with that he is very sorry for his past and looking forward to a much better future.

P.S. This DOES not mean that Jeremiah will not be seen on the upcoming episodes of Return to Amish. He will be there the entire season.

As with most anything having to do with Jeremiah, the announcement stirred up a bit of drama. In the comments section there were several conversations between “fans” and the page admin with topics ranging from whether or not Jeremiah is actually the admin making the posts, to the authenticity of his apology post. Here are some selections from the comments section:

COMMENTER: The ” admin” did not write this post. If you re-read the post you can tell it’s Jeremiah. He writes the same as he speaks! Jeremiah is just tired of all the horrible things people are saying to him!

ADMIN: Jeremiah can write. Some say he didn’t write his apology either but he did. Have you read his poetry? This was written by an admin and approved by Jeremiah. So yes an admin did write this and only because he needs to do what he needs.

COMMENTER: I thought he did his own page?

ADMIN: He has done his own page. There always has been some moderators but he always done his own thing till today. He wanted to step away so he can focus on him. Thanks for being here.

COMMENTER: He can’t handle the truth. He acts the same way here as he does with everyone in his life. Hot headed if things are not said or done the way he wants them to be done. I am praying he will sincerely get help and make positive changes.

COMMENTER: That’s why only positive comments are being allowed and the rest deleted. That’s not life or reality, that’s wanting to live in a fantasy land and still making excuses for what he did. Beating a woman is not a flimsy mistake you just dismiss and expect no one to say anything. This is disgusting and protecting the abuser. How about protecting the helpless woman he beat. So disgusting. I’m all for people changing, but this post by the admin speaks volumes and this isn’t the first time he’s been involved in domestic violence. The abuser playing victim, so unbelievably textbook and shameful

ADMIN: You can see that there is negative comments here. If they are threatening or bullying we will remove them. No where does it say Jeremiah is playing victim here and never will it. He has done everything here he could and now wants to concentrate on him and what he needs to do to better himself. If no one is able to do that they will always be a bad person. This was a big step for him and one that he took on his own. He will be back when he believes he is much better in dealing with all that goes on in his life. What has transpired he never denies or he wouldn’t be doing what has taken place. This is not a place to keep reminding him of things that have happened. He reminds himself everyday.

COMMENTER: He should be reminded, I have no sympathy. If this were your daughter, sister, mother I’m sure you’d be way less protective. Your excuses and protection are a disgrace to every woman who has been abused. Shame on you

COMMENTER: When won’t it be ok? When he beats her so bad he kills her? Or wait, he doesn’t beat her THAT bad lol. Gross. And shame ON Tlc if they keep a criminal on their show for ratings

ADMIN: Do you know him? Do you know Carmela? Then you don’t know what goes on. No one ever said it was OK. This is the real reason he is stepping away. Believe it or not but that is the way it is.

COMMENTER: I don’t, I know what he puts out there. What he chooses to do, he chooses to put his life in the public eye, so scrutiny will come with it. You trying to silence those with opposing views implies that you think what he did was o.k., excusable, not so bad. You are insulting the number of victims out there by protecting the abuser, you are insulting Carmella. I pray you, nor anyone you love ever goes through what he did to her!

ADMIN: People got to realize that what you see on the show is NOT what you get in real life. We are not here insulting anyone that is a victim. If so then tell us how? We are telling you that he has stepped away to put his effort in him. Doing so is him trying to never go back to his past. Why can’t anyone be thankful for him trying to better himself? Would you rather him stay the way he has been? That is what we take from these people that keep going about things, We just hope him and everyone involved get better.

ADMIN: He is working on him and no one said anything about him leaving the show. This season has been filmed already. You will see Jeremiah on the rest of the season. Thanks for being here and your support.

COMMENTER: Lol. Jeremiah- why are you speaking in the third person? We know it’s you writing it, not some admin. Lmao. Hysterical.

ADMIN: Believe it or not. It is true. This is real life and a subject that isn’t about a joke. Life isn’t a joke, he is doing what he feels he needs to do.

Meanwhile, Jeremiah’s wife Carmela Raber is also focusing on herself — literally, with a camera! Here’s a recent selfie she shared on Facebook: 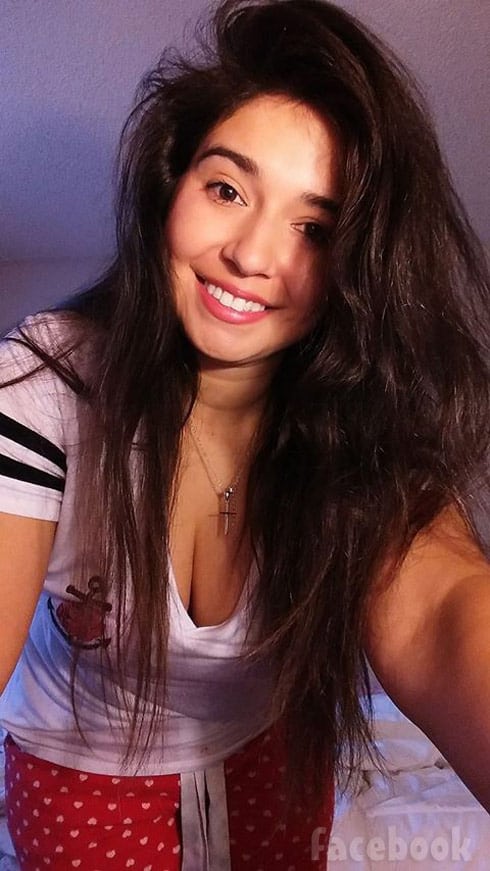 “Thank you all for your support,” Carmela captioned the picture. “Lost a few pounds and taking better care of my family and self.”

It is still unclear if Carmela and Jeremiah will attempt to stay together or not. It’s obvious that is what he wants, but it appears as though their future together is still in question, depending on Carmela.