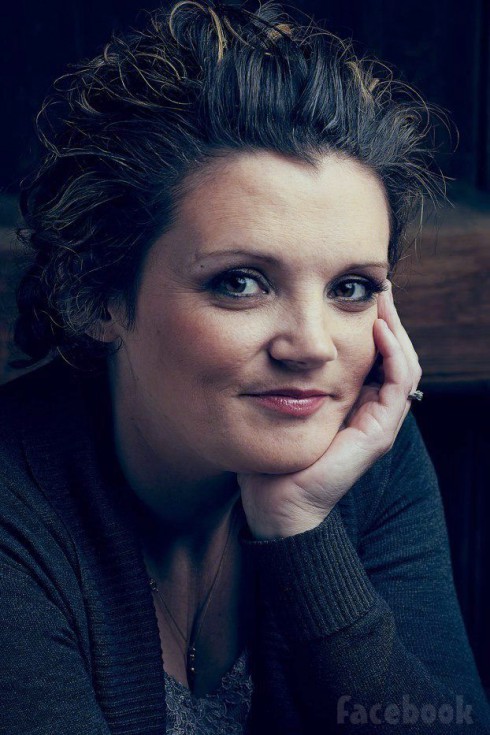 On last night’s heartbreaking episode of Return To Amish, Andrew Schmucker’s girlfriend Chapel Peace found out that her cancer is back. “I’m wrecked. I’m broken,” she says after getting the news from her doctor. “Going through treatment is the worst thing any one could ever have to do, and to know that it’s coming again — it’s a harsh reality,” she adds.

In case you didn’t know, Chapel was previously diagnosed with bone cancer in late 2011. After going through treatment, she was able to beat back the disease and was in remission until late last year when, after a routine check up, she discovered the cancer had returned, this time in her lungs.

At the time, Chapel was unable to work and she reluctantly started a fund-raising campaign on YouCaring.com in September, 2013. “This is something I would never do,” she wrote in conclusion, after explaining her recent diagnosis, “but I’m asking now please from the bottom of my heart, even if just a few cents, help me and my children not worry about tomorrow and be thankful that we have today….”

Here’s the full entry from Chapel:

Im a single mother of two very Beautiful little ppl Kolden is 9 and Kadence is 8. To think of what they are going through seeing me with cancer once again just absolutely breaks my already broken heart.. I was diagnosed with bone cancer late 2011 only to over come that battle against the beast and to live a year and one month in remission praying to god it was over.. we had a happy year full of joy love and smiles but it all came crashing down went in for a routine checkup only to find out my bone cancer has came back but only it came back as lung cancer deff not the words I wanted to hear..

Being a single mother is a strugle but now having lung cancer im unable to work and medical bills are stackin up and house hold bills and travel expense for the trips for treatment the world in becoming a scary place..Everyday when i have another day to wake up is a blessing but how long i can hold everything together i have no idea…

My medicine is very expensive and I hate asking anyone for anything cause i have this chip on my shoulder to prove to the world that i can do this but im failing this ship im sailing feels like its going to sink… im going to need to have my left lung removed and replaced with a pump so more time from work..

This is something I would never do but Im asking now please from the bottom of my heart even if just a few cents help me and my children not worry about tomorrow and be thankful that we have today….

I assume that the scenes from last night’s episode are in reference to her lung cancer diagnosis late last year. In the episode Chapel tells Andrew, “the results are in from my biopsy and they found a sarcoma.” Andrew asks her what the doctors said and she replies, “They’re saying it’s at a stage three, four kind of. Radiation may slow it down — chemo might kill it off.” 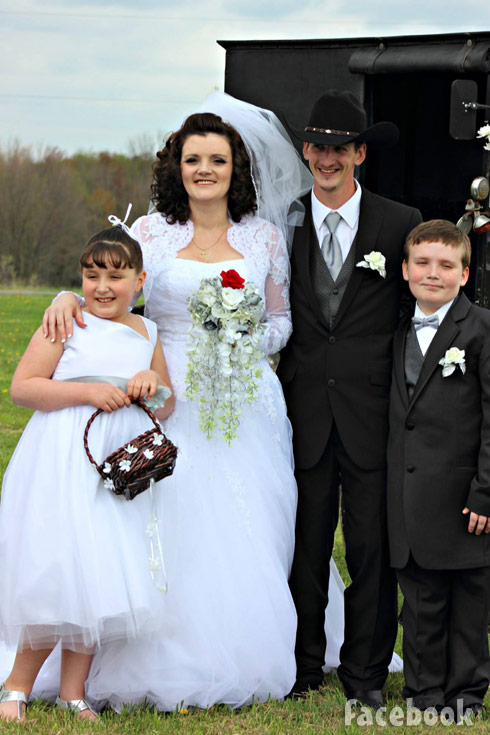 Since the diagnosis and the You Caring entry, Chapel hasn’t revealed a lot of information about how she is doing online. However, I think we can assume things are going well because not only did she marry Andrew Schmucker in a beautiful ceremony in Rossiter, PA on May 10 (wedding photo above with Chapel’s two children, Kolden and Kadence — click the link for more), but she also appears to be able to work again.

“Off to work…” Chapel wrote on Facebook on May 31. “Oh how I love stinking like a deep fryer and grill at the end of the night,” she added. On her Facebook profile she indicates she works for Denny’s, which would explain the deep fryer/grill smell.

On the other hand, I should point out that Chapel has recently made some rather concerning, albeit vague and brief, posts on Facebook. On June 13 she posted that she was going for “Another trip to the Hillman [Cancer Center],” and then she wrote the next day, “Haha turns out we are all alone.” The same day she added, “I feel so defeated..”

Obviously, our thoughts are with Chapel and we wish her all the best in her continued struggle with cancer. Also, we commend Andrew for really stepping up and being there for her [again] through the ordeal.

I couldn’t help but think of Hazel Grace and Augustus Waters from The Fault in Our Stars when Chapel said in last night’s episode, “Andrew and I have always had plans to get married and possibly have some kids. I just feel like I’m robbing him of his future.” She then adds, “It’s hard to plan for a tomorrow that you don’t know that you have.”

Andrew refuses to leave her side. “When someone you love has cancer it becomes your battle too,” he says.

An appreciative Chapel tells Andrew, “You being by my side brought me through the last time and I wouldn’t want it any other way.”

UPDATE — Chapel has seen a massive outpouring of support since the episode aired, and she posted the following appreciative message on her Facebook fan page on June 27:

The emails text phone calls the support pouring in from all over the world is so amazing ! Thank You all for the love and support .. I FIGHT THIS FIGHT FOR NOT ONLY ME AND MINE BUT ILL FIGHT FOR ALL OF YOU … ALL OF OUR FANS MEAN SO MUCH TO ME THANK YOU FROM THE BOTTOM OF MY HEART ♥ CHAPEL

UPDATE – Chapel has announced she wants to seek alternative treatment for her cancer in Mexico and she has launched a GoFundMe page to raise money for travel costs. Click here to get all the information and to see a video of Chapel (looking very weak) verifying that the fundraising page is indeed hers.

She said on the Reunion special that she is still deciding whether or not to get chemotherapy again because it almost killed her three times before. She is trying out other treatment options and weighing her options for quality of life.

UPDATE – Chapel has since launched another GoFundMe campaign to raise money so she can seek alternative treatment for her cancer in Mexico. Click the link for more info!