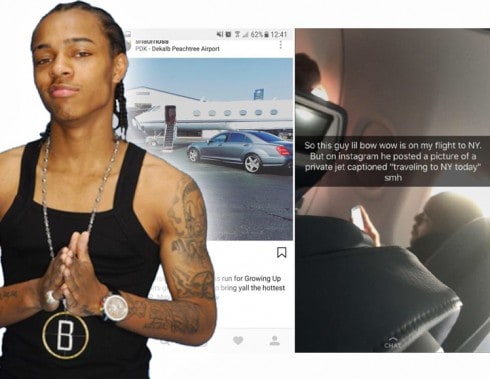 Twitter gave rapper Shad Moss, known as Bow Wow, all he could handle when it was revealed that he took a commercial flight after posting an Instagram snap insinuating that he was taking a private jet instead.

The hashtag trend #BowWowChallenge got lit as folks came in on the 30-year-old star for apparently getting called out in a baller lie. As time passed and more and more jokers left comments on his original post another question started popping: Why hasn’t he taken this down yet?

Here’s the pic (which sleuthers determined to be a stock photo):

Travel day. NYC press run for Growing Up Hip Hop. Lets gooo. I promise to bring yall the hottest show EVER. May 25th on @wetv

And here’s the image of Bow Wow from the actual flight: 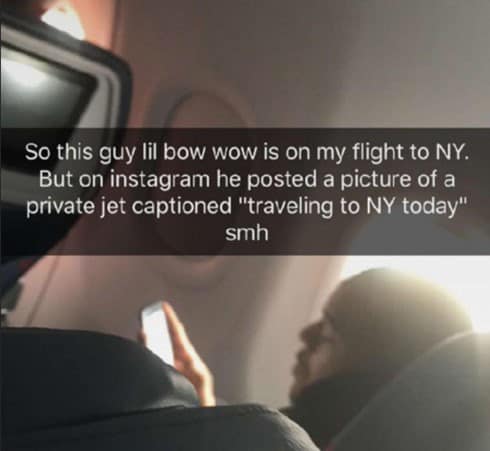 And the answer as to why that Instagram snap is still up, and why Bow Wow is having the last laugh, might be found in his latest venture. He’s the creative force behind the upcoming WEtv show Growing Up Hip Hop: Atl, which he mentioned in that pic.

As they say, there’s no such thing as bad publicity, so maybe this was a ploy to get attention for the show. If so, it was seriously well played–and, if not, he still got that pub.

Bow Wow did follow up with a call out on a different Instagram post when he explained, “Half y’all broke maf**kas still can’t afford a buddy pass on spirit airlines. Stay out the big boy lane.”

Either way – here’s the preview!

REP: Bow Wow’s girlfriend Kiyomi Leslie ‘beat him with a lamp, bit him on his side, and spit on him’ before both were arrested