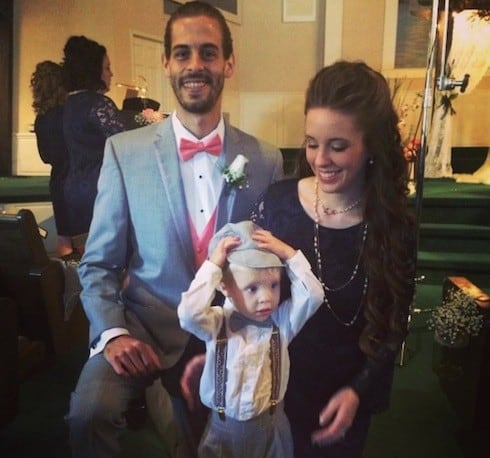 According to two new reports, executives at TLC are worrying openly about the likelihood that Derick Dillard could become a Josh Duggar-level liability and threaten the long-term future of Counting On. Of particular worry are Derick’s recent inflammatory anti-transgender comments, though his recent plea for fans to fund mission trips to Arkansas allegedly has more than a few eyes rolling, as well.

The Hollywood Gossip was the first to report on network worries about Derick Dillard. According to their take, “execs at TLC are…less than thrilled to be putting out fire[s] surrounding yet another Duggar scandal,” And their source, said to be close to Counting On‘s production, claims there’s “widespread fear on set” that Derick’s words “will mean the end of” the show.

“They’re probably not too long for TLC,” said the source. “My feeling is that they’ll probably get axed soon because of this Jazz [Jennings] situation….[Derick] opened up a can of worms that he never, ever, ever should’ve cracked a lid on.”

Meanwhile, Inquisitr’s article was the first to call Derick a “liability,” and to further point out that the major plot point of Counting On‘s new season is expected to be Jill Dillard’s pregnancy complications and the eventual birth of newest child Samuel. Because shooting for the new season wrapped well in advance of Derick’s comments and because Derick and Jill are “very much going to be a part of the new season,” it seems possible that later-season episodes will have to be re-edited, in order to minimize advertiser fallout and fan backlash.

However, any such scenario probably also depends on Derick continuing to make inflammatory comments as the season progresses. And it’s not clear that Derick will be willing to keep all of his opinions to himself, let alone able:

"If one gives an answer before he hears, it is his folly and shame." Proverbs 18:13

Good reminder not to be so quick to jump to conclusions

If we truly love people, we won't only speak what's easiest. Our standard shouldn't be what's politically correct, but what's best 4 people.

Yes! Jesus loves all people, and I am trying to be more like him by the work of the Holy Spirit. https://t.co/Pu5v1JW7eJ

BBWLA Are Tami Roman and Reggie Youngblood getting married?