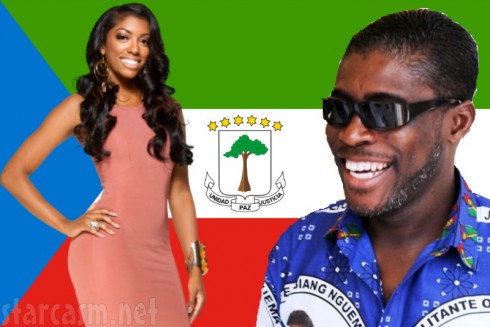 According to new reports, Porsha Williams’ divorce settlement from Kordell Stewart left her with little more than the clothes on her back. But, financially speaking, the Real Housewives of Atlanta star has apparently rebounded. The catch? Her new man isn’t exactly known for his ethical practices.

The elder Teodoro gained power during a military coup in 1979. During his reign, Equatorial Guinea became one of Africa’s top oil-producing nations. However, the oil money seems to go straight into politicians’ pockets: The United Nations estimates that less than half of the country’s 700,000 people have access to clean drinking water. Non-governmental agency Transparency.org lists Equatorial Guinea as the 15th most corrupt state in the world.

Porsha’s rumored new boyfriend — who goes by Teodorin — was named Second Vice President of Equatorial Guinea in May 2012. He is expected to become President when his father retires or dies.

Before moving into the Second Vice President position, 42-year-old Teodorin was widely known as an international playboy who once dated rapper Eve.

Despite officially earning roughly $100,000 per year for his government work, a lawsuit filed by the U.S. Department of Justice in June 2012 showed Teodorin owned a $35 million mansion in California, a fleet of luxury cars and several sought-after pieces of Michael Jackson memorabilia.

He previously owned a five-story mansion in Paris, where he kept an additional 11 luxury cars. That was all seized in November 2011 when he was under investigation for embezzlement charges. (Because of international law, officials can’t really interfere in the way the Obiang clan runs their government. But, INTERPOL seems keen to bust them on financial crimes committed on foreign soil… It’s kind of like how Al Capone was finally busted for tax evasion, not murder.)

For her part, Porsha seems to be embracing her reported boyfriend’s prince-like position. She captioned this Instagram photo “princess status.”

Although she hasn’t confirmed her new boyfriend’s identity, she did talk about him during a February interview with OK!.

“He’s well-known, so I’m being cautious,” she said, explaining he’ll likely appear on Real Housewives of Atlanta “He’s someone very special… He’s standing out from the pack right now. We’ll see how that turns out.”