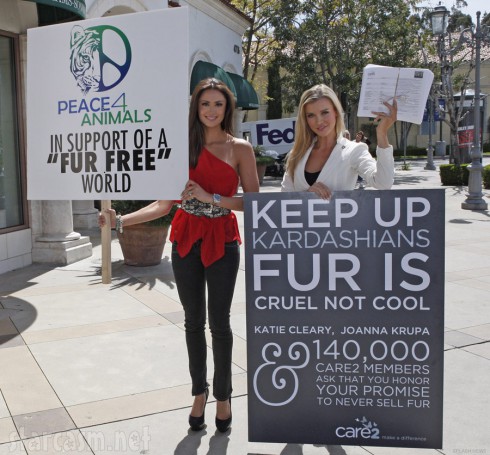 Reality shows collided in Calabasas, California Monday when reported new Real Housewives of Miami cast member (and PETA activist) Joanna Krupa joined up with fellow model Katie Cleary to lead a protest at the Kardashians’ flagship DASH store location. The two were working with social activism site Care 2 to present a petition with more than 140,000 signatures asking that the celeb fashionistas stop selling furs in their stores.

“One of the most influential families in the entertainment industry that could help give animals a voice on a large scale are the Kardashians,” Krupa said in a statement to RadarOnline.com. “As a fashion-forward family with their clothing line in stores all over the US, they have the power to influence millions of people around the world.” 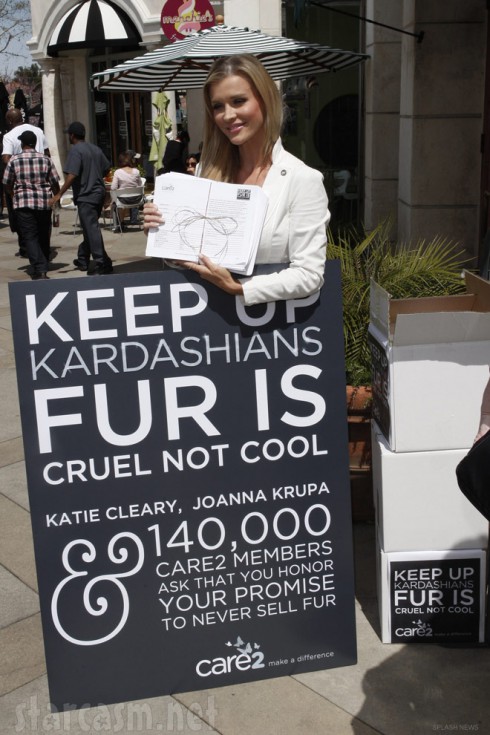 In addition to the petition, Krupa was holding a sign that read:

The protest seemed extremely well-timed as it came right on the heels of the infamous flour bombing of Kim Kardashian by award-winning PETA activist Christina Cho. (Although PETA has denied having any knowledge of the flour bombing incident, their connection to Cho – which not only includes giving her an award for her activism in 2010 but also employing her older sister – led to Kim and Khloe releasing rather scathing statements distancing themselves from organization and their “bullying” tactics.)

There didn’t appear to be any television cameras present at the event, so I’m guessing Bravo has no plans to include the protest in the upcoming second season of The Real Housewives of Miami. That’s a shame because a feud with the Kardashians could be exactly what the doctor ordered for the struggling (and revamped) Miami franchise! (Mama Elsa needs some help y’all!)