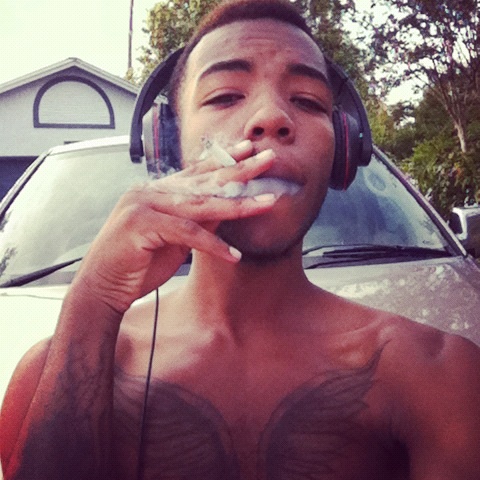 Tonight’s 16 & Pregnant episode features Briana Dejesus from Orlando, Florida. In clips of the show revealed during an interview with Good Morning America the father of her daughter Nova Star, Devoin Ri’chard Austin II, is portrayed as an absentee father. The narration of the preview states:

“Briana needs her mother and sister to rally around her because her baby’s father Devoin is nowhere to be found.”

Here’s a snippet of the interview that came later in the segment that further paints Devoin in a negative light:

GMA: Briana, I know you have beautiful Nova Star and you are not together with the father Devoin. Where is he today in terms of parenting, offering any help? Are you getting anything?

Briana: No. He comes and goes as he pleases. It’s tough.

After that, GMA’s Lara Spencer states, “We have a teen dad who is not contributing at all.”

There’s no other way to put this, GMA and Briana together make it seem patently clear that Devoin isn’t there for his daughter. Just to bring this home here is an excerpt from an interview with the Orlando Sentinel in which Briana talks about the most difficult part of her pregnancy and her life now:

Briana said the hardest part of her pregnancy was that Nova’s father, Devoin, was not there to take responsibility. Relations with Devoin haven’t improved since filming stopped. “He tries to come around. He does what’s convenient for him,” Briana said. “This is a 24-hour job. He should be around.”

Via Facebook and Twitter the young man, his friends and family have taken offense to this and made their feelings known.

Someone posted our write-up of that GMA interview to Devoin’s wall and here were a few of the comments made (unedited except for profanities) including Devoin’s reaction:

-> “Dam* I feel bad for devoin… they bashed him on national tv. I would be pissed if I was him.

-> Watching this pissed me off. American think you a deadbeat but we know the truth. ♥

-> Anyone who knows Devion knows he has a good heart, like I said before.. America don’t have SH!T on family

Another poster had the following to say about it on Devoin’s wall:

I just wanna say something,, I ♥ you little brother f**k them people they aint sh!t cuz we know the truth! You are so much better than this image theyre trying to portray of you..ijs WE know the true story! This sh!t got me hot so ima share before i say sumn too wrong cuz they dont want the real!

Devoin responded by writing, “Straight up man.. It’s all good don’t een worry bout it !! They just fake as hell”

On Devoin’s Twitter page which is tagged with, “Roll it up, light it up. Have a puff, let’s take a ✈.” He gave his followers a heads up on him being on TV tonight with a couple of tweets: