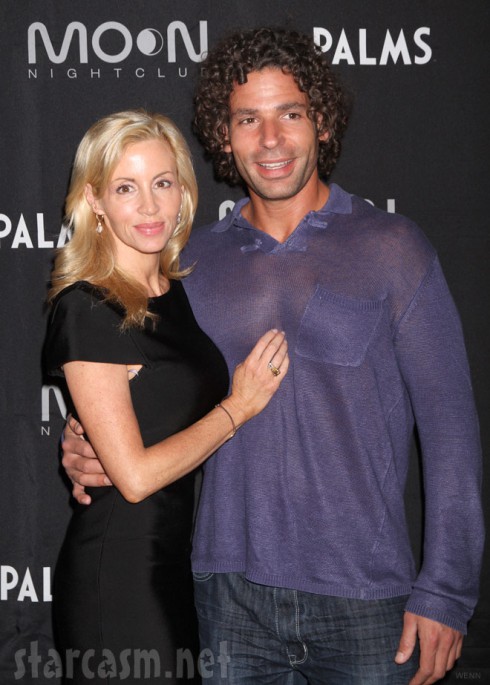 The Real Housewives of Beverly Hills star Camille Grammer did an amazing job of redeeming her image in season two after being portrayed as the icy and selfish villainess in the first season of the show. (You can see a visual representation of the turnaround with our RHOBH Likability Chart!)

But, instead of being able to enjoy her newly revamped image, it was announced last week that Camille will not be back for Season 3! The decision was made after Camille informed Bravo that she didn’t want her children to be filmed or her relationship with her new boyfriend, Dimitri Charalambopoulos.

And now we might have a better understanding why Camille didn’t want her relationship with Dimitri to be included on the show: baby mama drama! That’s right, Dmitri has a 5-year-old son named Marcus with an ex-girlfriend named Lisa, who is looking to relocate to Colorado.

The move must have caused some custody issues because it led to Dimitri being deposed, and during the deposition Lisa’s attorney played an audio recording of Camille threatening Lisa with legal action over the phone, saying “I will desecrate you” at one point.

Here is a video of the deposition in which the audio recording was played. Dimitri Charalambopoulos is wearing a hoodie, crinkling a water bottle, and appearing very skittish. (I’ve set the video to fast forward past a paranoid discussion over whether or not Lisa’s attorney is recording the deposition on his phone.)

Here’s what Camille Grammer said on the recording:

“If you go to the press, I have lawyers that are beyond what you can imagine and they will pull stuff on you and you will be so mortified about your life and your family and what you have done. You don’t want to do that to Marcus. I will desecrate you, believe me, and that I can do, so be careful what you say and what you do because my defamation attorneys are huge..they will hunt down and research every nook and cranny of your life.”

Dimitri is asked if it is Camille’s voice on the recording, to which he answers yes before asking, “Is there a reason I have to listen to all of this?”

Dimitri then stormed out of the deposition and refused to answer any more questions.

That audio recording sure sounded a lot like the Camille we were introduced to in Season 1 of The Real Housewives of Beverly Hills! And I have to give kudos to Lisa’s attorney for somehow getting this audio recording in the first place, and then using it in a deposition that would be videotaped and later somehow find its way online! (Depositions in cases like this aren’t public are they? How did this video make it to the internet? Any legal eagles out there want to help explain?)

To be honest, all of this just makes me even sadder that Camille isn’t returning for the third season. But, I can’t really blame Bravo. What’s the point of a “Real” Housewives show if they can’t even show one of the main character’s significant other? Plus, there is ample reason to believe Camille is putting tons of effort into keeping her head down and “playing it safe” in front of the cameras any way.

At least there’s one silver lining in Camille not returning – I won’t have to type the name Charalambopoulos every week!