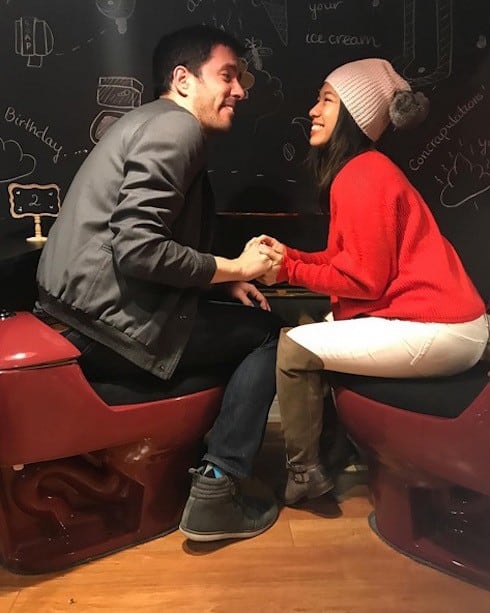 For Property Brothers fans, it’s one of the longest-running questions of all: Is Drew Scott married? Drew’s been together with long-time girlfriend Linda Phan since 2010, and the two seem like the perfect couple in their many social media updates together–so much so that many fans assumed the two had been married for years. In fact, in early 2016, a spate of photos involving the two together with a child led to widespread rumors that they had a baby together; the rumors turned out to be untrue, but nonetheless stood as a testament to Drew and Linda’s seemingly perfect relationship.

Well, this week, Drew shocked Linda with a surprise proposal…and of course she said yes!

From the first moment I met Linda, back in 2010, I knew she was special. And last night I became the luckiest man on the planet when she said #ido ❤️

How did the deed go down? A new report from People has the full details on what was a complete head-fake from Drew. For starters, he kept the ring on his person at all times since buying it weeks ago, and did all his proposal planning online, lest Linda–who works as the Property Brothers’ Creative Director–stumble across an errant e-mail or message.

Then, two weeks ago, he “snuck off” to New York City to record his own cover of Train’s hit “Marry Me”…

…and arranged for Toronto restaurant Piano Piano to play his version of the track during their dinner there last night. The track then “cued the staff to bring out a cake decorated with illustrations from one of Phan’s favorite books, Dr. Seuss’s Oh the Places You’ll Go, tweaked to read ‘Oh the Places We’ll Go,’ as a nod to their continuing journey together.”

Finally–as if all that weren’t enough!–Drew spirited Linda away to a surprise engagement party at a nearby venue, one Linda had been told was booked for a company Christmas party instead. According to People, the whole gang was there to celebrate the newly engaged couple: “both fiancés’ parents, as well as Scott siblings Jonathan and J.D., were all in attendance.”

How did he know it was time? According to Drew himself, he’s always known: “I’ve never met another woman like her, and, once you do, you want to be with her forever,” he told the magazine.

Congratulations to the happy couple! (And a side-congratulations to Drew Scott, who plays a supremely good deep game when it comes to planning top-secret big events. A tip of the Starcasm cap to you, sir.)

Surprise! Basketball Wives stars Tami Roman and Reggie Youngblood got married in secret a year ago